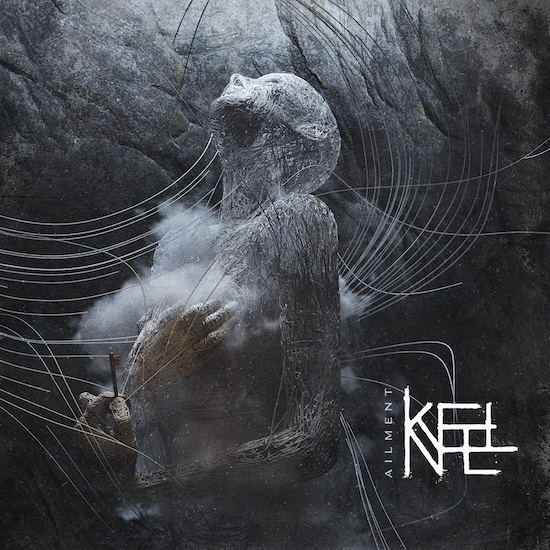 Bewildering and distressing times we live in, where the unstopped global migration of a microscopic organism has exposed a multitude of fissures in human societies that have been accumulating for countless generations, and turned them into gaping fractures. The scale of these terrible consequences is vast, a devastation writ large, but in some ways a reflection of what happens in so many solitary lives, where the accretion of seemingly minor problems over time can lead, and often does lead, to tragic and unmanageable outcomes.

The persistent failure of both individuals and societies to deal with mounting flaws until it’s too late is a kind of seemingly incurable ailment in the human condition. And thus it’s fitting that Kneel‘s new album, which was inspired by such thoughts, is itself named Ailment.

As the solo project of Portuguese multi-instrumentalist and producer Pedro Mau (ex-Kneeldown, Wells Valley), Kneel released a debut album named Interstice seven years ago but at last is returning with this follow-up full-length, set for an October 16 release by Raging Planet and Planet K, with vocals and lyrics contributed by Mau’s Wells Valley bandmate and Concealment guitarist/vocalist Filipe Correia. What we have for you today is a full stream of Ailment, preceded by thoughts about what you will be hearing. END_OF_DOCUMENT_TOKEN_TO_BE_REPLACED

(TheMadIsraeli re-surfaces at NCS with a group of quick recommendations of recent releases for your earholes.)

Kolossus are a pretty neat Finnish band whose music I couldn’t peg when I first heard them but I’ve settled on calling it melodic death metal. Really good melodic death metal is rare for me these days, but this group’s combination of the playfulness of Into Eternity, Before The Dawn‘s style of morose gothic melody and atmosphere, and  their militant energy and propulsive grooves bring to mind both Byzantine and System of A Down. END_OF_DOCUMENT_TOKEN_TO_BE_REPLACED

Kneel is the solo project of multi-instrumentalist Pedro Mau from Ponte de Sor in central Portugal, a former member of Kneeldown and Wells Valley. In 2013, with the aid of guest vocalist/lyricist Filipe Correia (Wells Valley, Concealment), Kneel released an album named Interstice, on which Mau was composer, guitarist, bassist, and drummer — and he produced and mixed the record as well.

On May 22nd, the Portuguese label Pulmonary Records will release an updated version of Interstice, which features new mixing and mastering of the music as well as ghostly new cover artwork drawn by Hernan Marin. Today it’s our pleasure to premiere a track from this revamped version of Interstice, a song called “Amend“. It’s a prime example of the visceral, bone-breaking, thoroughly electrifying impact of the music on Interstice. END_OF_DOCUMENT_TOKEN_TO_BE_REPLACED