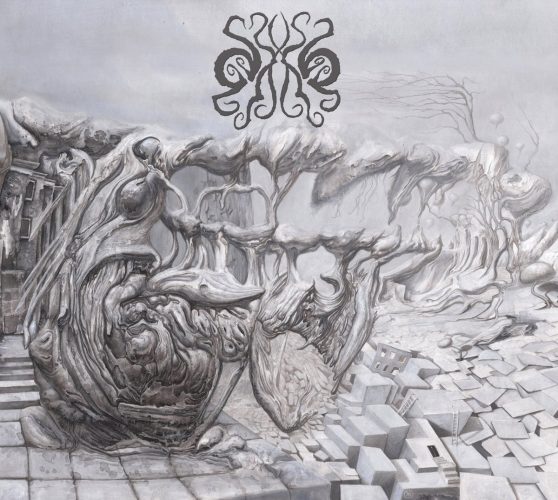 Let’s begin with the chekeré. According to The Font of All Human Knowledge, “it is a West African percussion instrument consisting of a dried gourd with beads or cowries woven into a net covering the gourd…. In performance it is shaken and/or hit against the hands.” That same source explains that the chekeré “is common in West African and Latin American folkloric traditions as well as some of the popular music styles”.

As a result of the musical project Onkos, that last sentence quoted above will now have to be amended to add “and avant-garde death metal“.

Yes, you read that correctly.

Onkos is one of the many projects of Robert Woods-LaDue, a resident of the San Francisco Bay area. We are told that he has been making chekeré out of dried gourds since around 2010, composing music for large ensembles of the instrument. In Onkos, the instrumental palette includes six chekeré of different sizes and tonalities. It also includes a battery of acoustic guitars, the heaviness of a bass, and synthesizers used in varying ways to add differing dimensions of sound and mood.

We are further informed that in the music of Onkos the harmonic landscape is complex, and includes “heavy use of the many flavors found within augmented, half-diminished, and octatonic chords”.

Vocally, Woods-LaDue adds an ugly growl and occasional ghastly shrieks. Lyrically, we’re told that Onkos is “focused on the plague of cancer and the life-disrupting therapies to fight it… a delirious observation on the long, slow cellular unraveling of body and mind, as represented in Pete Hamilton‘s metaphysical cover painting”.

Well, you probably don’t get it yet, but you’ll begin to understand if you listen to the song we’re premiering today from Onkos‘ self-titled debut album, which will be released on May 24th by I, Voidhanger Records, a label treasured by many of us for having a risk-taking approach to the curation of music that’s well off the familiar beaten paths of metal. (Onkos is so far off the beaten paths that you can barely see them any more.)

The song we’re presenting is “Hepatic“. It is a vibrant and head-swirling piece of music. The rippling and darting acoustic strings dance, interwoven with the deep boom and compulsive rattle of the chekeré. The synth melodies slowly glide and simmer around the percussive choir. The effect is bewitching — but there are both feverish and dark moods in the music as well, both frenetic guitar harmonies and ominous chords, rapidly changing rhythms and perilous ambient waves, and of course the gruesome and gritty vibrations of a human larynx.

I found the song bewildering yet entrancing even on the first listen, and indeed so fascinating that I’ve been returning to it several times a day since then, sometimes trying again to decipher what I’m hearing and sometimes just letting myself be carried away by it, and it has made me smile every time. Hope it has the same effect on you. (I haven’t heard the rest of the album yet — and I can hardly wait for the chance to do that.)

At the end of this post you’ll see a video that I found of Robert Woods-LaDue showing the chekere of various dimensions that he used for Onkos, demonstrating how to play and record them, and even explaining a bit about the musical notations used to document the rhythms. It’s an appealing video in part because it shows the endearing difficulty (which we’ve all seen see in other contexts) of a person who is very good at what they do, so good that it’s probably second-nature, trying to explain it to someone else who is completely ignorant about the subject matter.

Robert Woods-LaDue recorded the music of Onkos. It was mixed and mastered by Sean Price at Misery Loves Company in Oakland. As mentioned, Pete Hamilton made the cover painting. The logo was designed by Devin Smith, and long-time I, Voidhanger ally Francesco Gemelli was responsible for art direction and layout.

The album will be released in a limited digipack CD edition, and digitally, and you can pre-order it now: