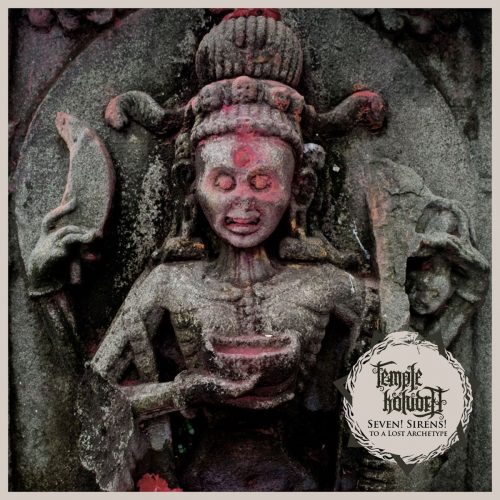 On their debut album, Seven! Sirens! To A Lost Archetype, the blood-freezing Germany mystics in Temple Koludra demonstrate a spine-shivering mastery of a particular kind of night-dark musical art. Inspired by a fascination with Indian spirituality and armed with the implements of black and death metal, they’ve crafted an experience that’s both nightmarish and spellbinding, a throwing-open of portals to dimensions where nothing seems real but everything seems ready to devour you, body and soul.

The song we’re premiering today, “This Diadem Will Last“, is emblematic of the band’s terrifying gifts. It has the quality of a disturbing vision, a hallucinatory revelation of apocalyptic doom, demonic grandeur, and psychotic cruelty. It may cause your skin to crawl, but it’s transfixing, and it’s likely to haunt your memory for perhaps longer than you would like.

The main line of this song is mid-paced, grim, and ruthless, a combination of portentous booming drums, dismal riffs, high, seething guitars that channel a gibbering lunacy, and extravagantly savage, flesh-rending vocals (which sometimes sound like a convocation of fiends). The music is imperious and poisonous — and unmistakably unearthly. Filaments of strange melody flicker in and out of this ruinous display, and the terrors of the ominous, ritualistic march are interrupted by interludes that only deepen the music’s preternatural atmosphere: Drifting ethereal tones chill the skin, and nearer the end, glowing strings, warbling emanations, mumbling bass, and soft ghostly cries beckon from the void.

It’s the kind of song that makes a person shake their head after it’s over, trying to regain a sense of clarity and purpose — which isn’t easy, because it’s entirely too easy to get lost in these harrowing sounds. As mentioned, the effect is mesmerizing, despite how disturbing these soundscapes are. And that, by the way, is meant as high praise.

Transcending Obscurity Records will release this new Temple of Koludra album on June 14th, and recommends it for fans of Mgla, Svartidaudi, Necros Christos, Gaerea, Jupiterian, and Nigredo. You’ll find links for pre-order info below, along with our premiere and streams of two other previously released tracks from the album. Enjoy!