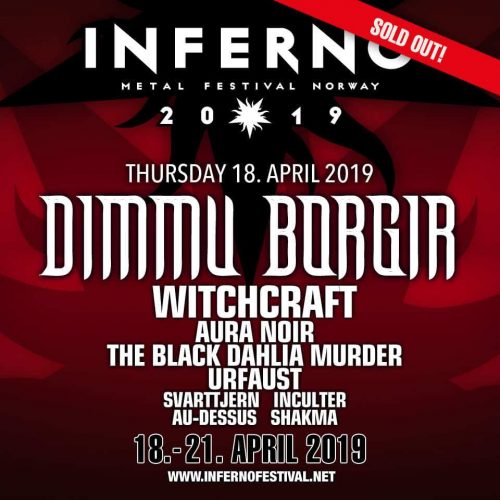 (In what has become an annual tradition, our man from the UK, Andy Synn, attended Inferno Festival on April 18 – 21, 2019, in Oslo. Beginning today we will post his reports on the event, day by day, accompanied by a few of his photos.)

This year’s edition of Inferno Festival was a funny one for me, for a couple of reasons.

For one thing the allure of the headliners simply didn’t seem as great this year (although the undercard definitely provided more than its fair share of gems), with only the highly-anticipated Hypocrisy headline slot on the Friday really standing out to me (which, let me be clear, is no judgement on the festival organisers, or the other bands themselves, and merely a reflection of my own mindset where Dimmu, Bloodbath, and Opeth are concerned).

More importantly, however, this was the first year where I’ve attended the festival and NOT been able to see all the bands I wanted to, as I started to develop a really nasty fever on the Saturday, and ended up spending the next sixteen-or-so hours simultaneously burning up and freezing to death while my body tried desperately to sweat out whatever was poisoning it, and even now I can count the number of hours of sleep I’ve had since then in the single digits.

Still, I can’t complain too much, as I managed to see almost all the bands I really wanted to watch over the course of the weekend, and can only apologise to the ones I missed.

Due to my flight to Oslo setting off and arriving late (seriously, how do 35(!) people check-in but then not turn up to the actual plane???) I wasn’t able to make it down early enough to catch either Svartjern or Shakma, but thankfully did arrive in time to watch The Black Dahlia Murder give a predictably good performance on the mainstage.

Interestingly enough. their set got off to a slightly shaky start, with the quintet seeming a little put-off by the unexpectedly tepid response from the crowd. However. as the audience quickly warmed up so did the band, and by the time they hit their stride with “What a Horrible Night to Have a Curse” (followed swiftly by, amongst other killer cuts, storming renditions of “Everything Went Black”, “Kings of the Nightrealm”, and a climactic “I Will Return”) practically the whole venue was moving and grooving like one monstrous machine.

It was Lithuanian foursome Au-Dessus who really set the bar for the evening, however, with what I still believe was one of the strongest performances of the entire festival, which not only captured the full power and intensity of their recorded output in microcosm, but actually expanded it even further, delivering both an angular abrasiveness that reminded me of Dodecahedron in parts and a pensive penitence which recalled Altar of Plagues in their prime.

Unfortunately this made Aura Noir’s nostalgia-fuelled set (fist-pumping Motörhead cover included) feel rather more staid in comparison, and while both the band and the audience were clearly enjoying themselves throughout, my overall impression was of a band who were more than happy to rest in cruise-control mode for the time being.

As you might expect, the evening hit a bit of a lull at this point, and although both up-and-coming Thrash types Inculter and Swedish doomsters Witchcraft subsequently provided all the requisite riffery to keep the evening going, it wasn’t until Urfaust hit the stage that things finally seemed to get back on track, with the duo delivering a truly dense and disturbingly hypnotic musical experience over the course of the next hour.

Now, I’m happy to admit that, even as a long-term fan of the band, Dimmu Borgir, haven’t exactly been at their best in recent years.

Oh, I like their latest album well enough, and am especially glad I attended the filming of their Forces of the Northern Night show with the full orchestra and choir a few years ago, as that really was them at their OTT peak. It’s just that, ever since then, the band seemed to have settled into something of a rut, particularly when it comes to their live shows, with more and more of their sound being relegated to the backing track (I’m not even sure WHY they bother with a live keyboardist any more, as so much of what he does seems to be pre-recorded and auto-triggered) and less and less effort being put into making each appearance feel special in its own right.

And while you can still occasionally see flashes of the old Dimmu every now and then, tonight’s set – despite the inclusion of some more “classic” cuts later on – really felt like a case of the band just going through the motions, with Shagrath, Galder, Silenoz and co. delivering a highly-professional but ultimately pretty forgettable performance that offered no real surprises, no “festival-worthy” moments, and no sense that this was anything beyond “just another show” for the band.

Of course a good portion of the crowd didn’t seem to share my opinion on that matter – though I’d contend that the band could have performed an entire set of Backstreet Boys covers and a proportion of their fans would have bent over backwards to praise it as “daring” and “provocative” – but I have to confess to feeling rather disappointed (though not necessarily surprised) by what seemed like a genuine lack of effort and engagement from the Dimmu Borgir boys this evening.

On a more positive note, however, I’d like to close with a quick shout-out to Eiterorm, one of our regular commenters, who was kind enough to come up and introduce himself and chat with me (despite me being slightly spaced-out due to tiredness at this point) prior to the headliners. It’s always nice to meet one of our readers (and occasional writers), if only to know that there really is a real person out there behind the screen-name! 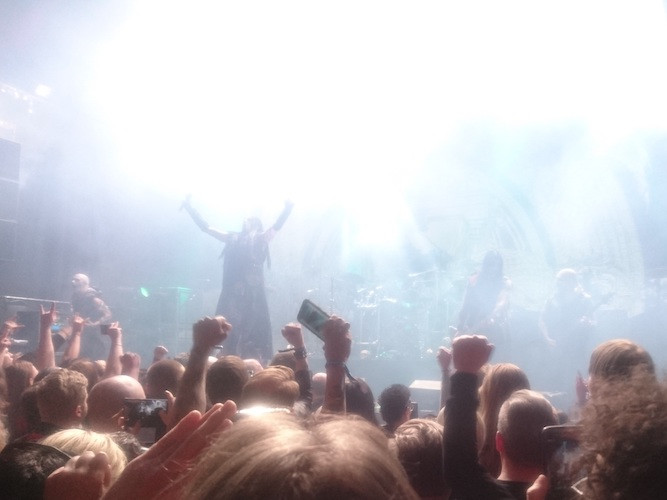