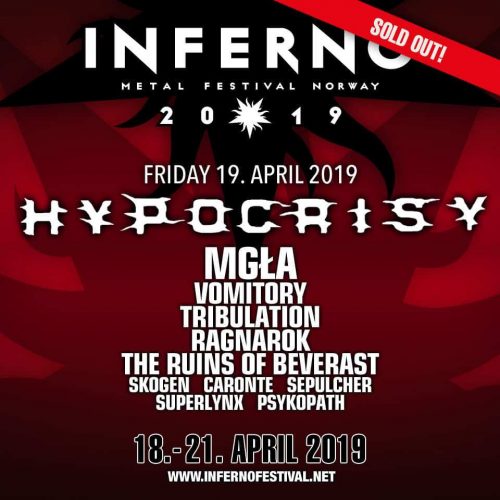 Day 2 of this year’s edition of Inferno Festival started off on a promising note, as I woke up feeling heartily refreshed and full of piss and vinegar… and once I’d been to the bathroom, emptied my bladder, and brushed my teeth, I was still feeling pretty fresh, so was able to make it down to the gym for an hour, then off into the centre of the city to have a wander and find some food, before finally making my way back to Rockefeller where, over the course of the evening, we’d all be treated to at least three headline-worthy (or almost headline-worthy) performances, perhaps as the universe’s way of making up for yesterday’s slightly lacklustre finale!

Of course, due to my poor time-keeping, I managed to arrive later than I intended, but still managed to catch a fair bit of Ragnarok, who brought some (literal) fire and (metaphorical) brimstone to their early-afternoon set, along with some brand-new tracks from their upcoming album, and performed with all the vim and vigour of a much younger (and trimmer) band!

Up next, after a prolonged wait, was Tribulation, and while I’ve never been a fan of the band previously… I didn’t “get” them then, and I suppose I still don’t “get” them now… after seeing them live I definitely understand why so many people like them so much, as they’ve just got “it”, that hard-to-define x-factor, which makes it nearly impossible to turn away once they hit the stage.

Of course it also helps that, with all its needle-sharp melodies and raucous, riff-friendly hooks, their music hits an unexpectedly sweet (and arguably pretty unique) spot halfway between Dissection and Motley Crue (a buddy of mine says Cinderella would be a better comparison, but then he’s not writing this review is he?), and that each and every member of the band practically oozes charisma out of every pore. And, yes, I’m including the drummer in that assessment.

So while I still don’t know if I’d ever be in the mood to listen to them in my spare time, I can definitely say that I’d be more than happy to see Tribulation live again, especially since they arguably put on a much better and more headline-worthy show than Dimmu Borgir did last night.

Down in the bowels of John Dee I was next to discover my first big surprise of the festival, in the form of Italian Stoner-Doom Satanists Caronte, whose mix of massive, rumbling riffs, strident, dramatic (not to mention entirely clean) vocals, and ambitious occult stage setup made an immediate and lasting impression on this particular listener, and frequently put me in mind of the psychedelic, doom-laden soundtrack to modern-day cult-classic Mandy.

Expect a Synn Report about them VERY shortly.

Back up on the main stage Swedish Death Metal veterans Vomitory made a great case for why they were a great choice to be one of the warm-up acts leading up to Tagtren and co.’s headline set later on, as while their sound isn’t quite as overtly melodic (or alien) as their more famous countrymen, their use of big, bombastic riffs, heavy grooves, and brutal, bowel-loosening vocals – all topped-off with a pinch of crisp, almost Carcass-esque melody – made for a neck-wrecking good time for all involved.

Moving back downstairs I had my first encounter with the mournful, atmospherically-intense Black Metal of Skogen, and was very impressed by what I heard, particularly the fluid interplay between melancholy clean vocals and gritty growls provided by Mathias Nilsson and Joakim Svensson which, over the next forty-or-so minutes, helped turned the enclosed confines of John Dee into something/somewhere much greater and much grander.

One of the most anticipated bands of the night (and not just by me) were up next and, as a result, the main Rockefeller arena was absolutely packed well before Mgła even set foot upon the stage.

Thankfully, not only did I manage to grab myself a good spot from which to watch and listen, but the band themselves were on stunning form, ripping through every single track like they were the evening’s headliners (and, considering the crowd response, they quite easily could have been).

Granted, the faceless foursome aren’t exactly big on audience interaction, preferring to let the music do all the necessary talking for them, but when you’re still riding the wave off back-to-back classics like With Hearts Towards None and Exercises in Futility (which, unsurprisingly, made up the bulk of the band’s set this evening) then you’ve got more than enough songs to allow you to do this!

It really was an incredibly intense and immersive performance, and one I hope to be able to witness again as soon as possible!

The night’s penultimate band offered a slight change in pace, as while The Ruins of Beverast definitely have a prominent Black Metal side to them, tonight’s set seemed (to me at least) to focus a little more on the doomier and more darkly proggy side of their repertoire, interspersed here and there with moments of searing savagery which served to remind the audience that, even fifteen years into their career, the band can still bring the thunder with the best of them!

The grand finale of the evening, however, was left to Hypocrisy to deliver, and deliver they did, both with an impressive light show and a heavy, high-energy setlist which culled material from practically every era of their career, kicking off with an electrifying one-two of “Fractured Millennium” and “Valley of the Damned” (with the latter in particular enforcing a mandatory “headbang or die” rule on the audience).

Tagtren, as always, conducted himself as master of ceremonies with aplomb, encouraging an ever-more enthusiastic response from the crowd as the band stomped and swaggered their way through riff-heavy ragers like “Adjusting the Sun”, “Killing Art”, and “Warpath” (with a quick diversion along the way for a medley of tracks from the band’s earlier, more primitive, years), while drum-god Horgh conducted the entire thing with perfect precision from his elevated percussive throne.

Of course the one issue with any Hypocrisy show is that, even though their most recent album is now over six years old (with only the title-track getting an airing tonight), the band’s back-catalogue of albums is so deep at this point that there’s never going to be enough time/room to hear everything you want, which meant no “Born Dead, Buried Alive” (though we did get a damn fine rendition of “Eraser”), no “Let the Knife Do The Talking”, and no “Solar Empire”, for me this evening, as the setlist definitely skewed more towards the band’s late-’90s era.

Still, that’s a minor complaint considering, when the final strains of the climactic “Roswell 47” finally rang out, pretty much the entire venue (myself included) was on their feet applauding and chanting the band’s name.

So, in case you were wondering, you can definitely consider Hypocrisy’s headline set a resounding success. More please! 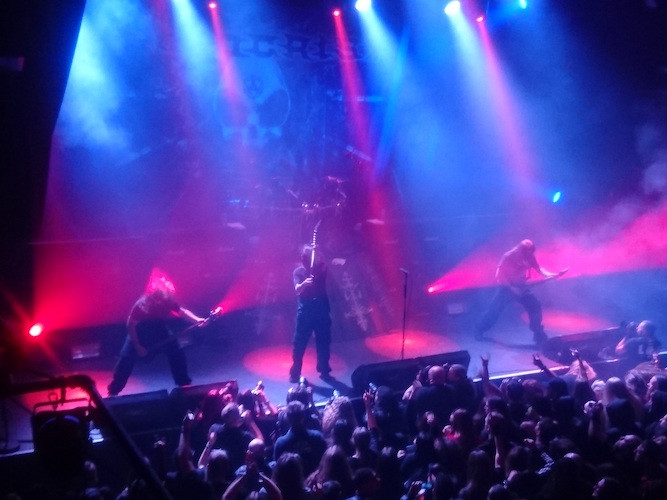