This review is very late. The fault is mainly mine, though I do think the band share a certain amount of the blame. My first trip through their latest album damaged certain vital cognitive faculties (the ones that tell me who I am, where I live, and what day it is), and the injury became more severe as a result of subsequent trips. A memorial service for the fallen brain cells resulted in further delay, even though I was the only person who bothered to attend and the deceased had already been cremated (by the music).

Still, I should have done better, even under disabling circumstances, especially because V2 – Vergelding: Dawn of the Planet of the Ashes has been out since November 15, 2018, when there were still turkeys awaiting slaughter for Thanksgiving (I wonder how many farmers used a stream of V2 to exterminate them?), and I had even received a handsomely packaged (but not autographed) physical edition of the album. Amends must be made, and now they have been (I hope).

The album is two seconds beyond 47 minutes in length, consumed by six new tracks and including live recordings of two slightly older ones from Graspop Metal Meeting 2017 (more about those later).

Conceptually, the album is a sequel to V1 – Versus: It Will Burn Us Without Leaving Ash, reviewed here, which was released in 2017 (and is the source of those two songs performed at Graspop). Lyrically, that album (which included reworkings of a couple of songs from The White Crematorium) vividly told tales of horrors wrought before and during World War II by human monsters (Hitler and Stalin) in Lovecraftian and demoniac language, as if expressed from the mouths of those monsters and their twisted followers. The words alone were terrifying.

V2 – Verdelding deals with the aftermath of the events in Versus, and in particular, with the meting out of retribution, which is one of the meanings of vergelding (the other meanings listed on the interior center panel of the CD package include “retaliation”, “reprisal”, “revenge”, “requital”, and “vengeance”). And so the title track takes as its subject the payback that the Nakam group of Holocaust survivors sought to achieve in an effort to poison 6 million Germans, and of the “hunting birds of prey” in Shin Bet who sought vengeance for the killing fields of Warsaw, the pits of Minsk, and the crypts of Sobibor, while “Fist of Stalin” recounts the fury of the Red Army as it exacted its own retribution against the remnants of the Third Reich.

“Rise of the Dhul-Fakar” is perhaps a less-expected narrative of retribution, focusing on the shahidkas (Black Widows) — Islamic Chechen female suicide bombers (many of whom were widows of men killed by Russian forces in Chechnya) who engaged in a campaign of terror within Russia from 2000 through at least 2013.

Well, enough about the lyrical themes, other than to note that V2 is only the second part of a trilogy. One more album is in the works, but where it will take this narrative cycle of human violence I don’t know, though stories of human cruelty and revenge are of course never-ending. It is a black vein that will never be mined-out, because it is continually replenished by ignorance and hatred. We are, in the words of this album’s opening track, a Planet of Wrath. 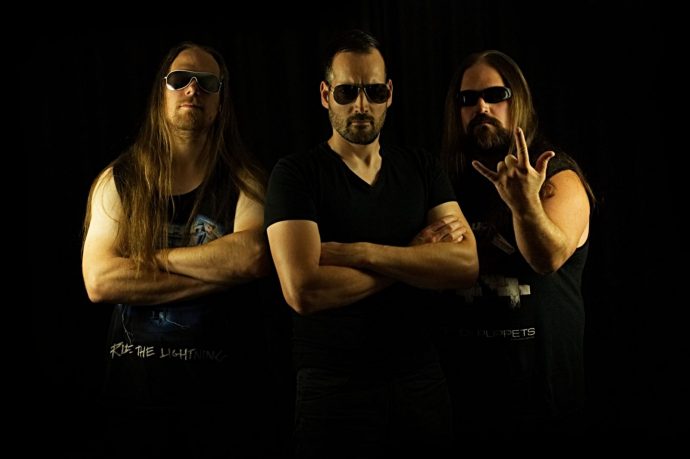 To me at least, there has always been something particularly paradoxical about TMDC, and especially so in the aftermath of the their last two albums in this ongoing trilogy. There is absolutely nothing hopeful in the lyrics of either album, or the historical subjects they explore — nothing bright, nothing redeeming. It is all a pitch-black reminder of humanity’s worst impulses and actions that can do nothing but invoke disgust and resignation. And yet the band themselves are funny as hell, and comically self-effacing. And as I’ll explore a bit further, their music isn’t as catastrophically bleak as one might expect. Maybe it’s a reflection of the adage that sometimes it’s better to laugh when the only other option is to cry.

There are indeed opportunities to chuckle throughout the album, beginning with the samples and narration in “Planet of Wrath” (delivered by Sir David Attenborough and/or someone with a posh British accent who sounds very much like him) in which, among other things, the narrator observes about TMDC that “though few in number, they cause more harm to art and culture than any other group on earth”. The narrator tends to reappear humorously in between each succeeding track, but to be clear, the opportunities to laugh are dwarfed by the displays of foot-pounding, neck-wrecking, breath-taking musical spectacle.

With “Planet of Wrath” behind us, the following five tracks administer addictive hooks, stupefying grooves, waves of symphonic grandeur, spectacular soloing, macabre vocal terrors, and nuclear-strength detonations. And although TMDC have a well-proven proclivity to indulge in unabashed, over-the-top death-metal theatricality — a trait that is still nakedly on display in Vergelding — it doesn’t become tiresome, because these songs have other dimensions as well, and there’s a dynamic quality about the flow of the tracks that doesn’t allow you to wriggle off the hook.

As opening songs go, that one is a shock-and-awe campaign. Wisely, it’s followed by music that’s a slice of gloomy mid-paced grandeur. Yes, “Come Forth Lazarus” is ominous and miserable, infiltrated by shrieking, febrile filaments of alien melody  and laced with especially gruesome and imperious gutturals and with fusillades of snare-drum mania. And it’s still heavy and jolting enough to fracture vertebrae. Moreover, waves of dolorous symphonic strings cascade through the song’s latter half in a display of grief-stricken majesty.

You never really escape the impulse to headbang in any of these songs, but “Fist of Stalin” is a particularly massive neck-wrecker. But that’s not it’s only attractive aspect. An exotic, serpentine melody slithers through the opening warlike battery, and surfaces repeatedly, trading places with bursts of blaring, pulsating, head-hammering riffage, augmented by a skull-flattening low-frequency industrialized rhythm (and some cowbell). But that’s not all! The song also includes a rapidly rippling keyboard motif and flares of darting electronica. Oh hell, yes you can bounce to this! And why the hell didn’t I put it on our list of 2018’s Most Infectious Extreme Metal Songs? (Answer: because I’m an idiot.)

The band decided this would be a good time to throw a bit of a curveball, because curveballs are definitely part of their stock-in-trade, and so we get “The #Snowflake Anthem“. Most normal people will laugh at the title, but the music’s not laughable, and it does become anthemic. A dreamlike symphonic interlude at first, with a bright, vibrant melody, it becomes much heavier when craggy guitar chords make their appearance, and more soulful thanks to a gorgeous solo that may be the most grand and glorious thing on the album. And oh yes, when the band lock into a big hammering rhythm, you can wear out your neck once more. 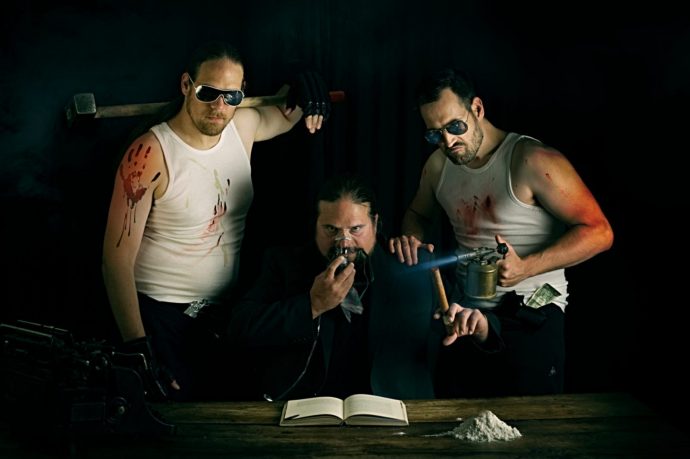 Everything is relative on this album. Nothing is really “a breather” or a moment of reflection here, but “The #Snowflake Anthem” might seem that way by comparison to the turbocharged, kaleidoscopic extravagance of the last new song on the record, “Rise of the Dhul-Fakar“. From blasting drums and brutal, drilling riffs to scalding screams and gargantuan roars, from swirling and flickering keyboard melodies to rapidly writhing chord-work, from bursts of electronica to malignant pounding and crazed, fireball soloing, the song is a merciless adrenaline trigger — right up until it becomes something else.

The song slows, and the melody groans, even though the drum pattern is vibrant — and then the band reach for heights of ominous grandeur once more, only to erupt like Vesuvius once more, with yet another solo capable of raising goosebumps on your arms, and it ends in a crescendo of titanic drama.

After a finish like that, you expect the curtain to drop, and the band to come out, take a few bows while enjoying their standing ovation, and then exit stage-left.

But no, there are two encores, those two live tracks I mentioned at the outset — the gargantuan, doom-stricken behemoth that is “Die Glocke” and the bleak, brutalizing, berserker insanity of “The Furious Gods”. Both prove that TMDC are capable of carrying off their decimating pageantry on stage as successfully, and with as much sheer visceral power, as they muster in the studio. Those songs left me wondering whether the venue was left standing after the band finished. I’m very happy to have both tracks, because who the hell knows when I’ll get the chance to witness such a spectacle in the flesh?

P.S. Silence falls with about a minute and a half left in the final track. I waited patiently, hoping for a personal tribute to me, by name. That didn’t happen… but something else hilarious does, right at the end.

And with that, at last, all amends made, I’ll fall silent myself.