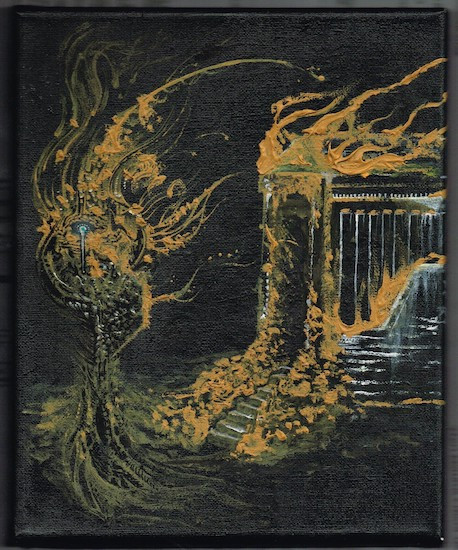 It’s fair to say that most of our premieres, even for genuinely underground bands who are seeking neither fame nor fortune, are arranged by PR agents and labels — but certainly not all. Our mission is only to spread the word about metal that makes a strong and positive impression, music that moves us and that we think might move you, regardless of how we learn about it. Here is an example of that, which came our way via a message from the band itself, and which we then sought permission to premiere.

The band is Lux Nigrum (“black light”), which is the work of Chilean solo artist Azerate, aided by session drummers. On this new EP, Burning the Eternal Return, the drums were performed (with extraordinary skill) by Holycaust, the man behind the Chlean black/thrash band Morbid Holocaust. Conceptually, the EP is about “the destruction of the cosmic order imposed by false gods through the sacrifice of the Ouroboros (when you can recognize it’s representation as a tyrannical form of eternal emptiness and absurd repression) putting an end to the cycle of life and death”, and thus it concerns “rejecting the life given (not denying it) and dissolving the ego that binds us in an earthly way, to accept the return to the Primordial Chaos”. 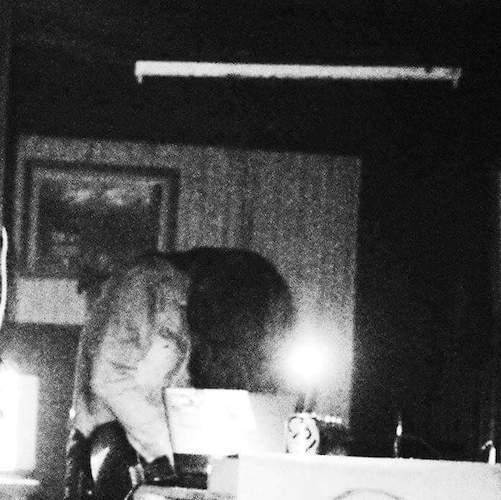 Azerate’s lyrical texts reflect that theme, with a spiritual devotion to the acceptance of the “neverending and formless infinity which chaos represents”, and transcendence over the cosmic cycle of death through appeals to the “holy igniter of the black flame”.

Consistent with these inspirations, the music on Burning the Eternal Return does channel chaos, but not in the sense of some flailing, disorganized cacophony. There is a palpable sense of fierce wildness and burning devotion in the music, but an equal devotion to the crafting of excellent riffs, which have both emotional power and magnetic musical appeal.

In the quality of its sound, the EP strikes a nice balance between clarity and roughness, with a predominant “naturalness” to the tones that seems to be a rejection of gimmickry, yet without the production sounding shiny and clean. There’s certainly nothing clean about the vocals, which expel the lyrics in extravagantly vicious growls and snarls that manifest absolute conviction.

The songs are all relatively brief, and the pacing is usually rampant. The main driving pulse comes from thunderous drum pounding and throbbing bass tones, but it’s what happens around those fast, primal thrusts that seizes attention. With a skull-cracking tone, the snare drum leaps out in extravagant clattering flurries and light-speed fills, an electrifying performance that reveals eye-popping speed and athleticism. And the riffs prove to be equally striking.

In each song, Azerate does a fine job establishing a musical theme in the lead riff and then creating variations on the theme that reveal differences in mood. The first track, “Solvet Cosmos in Favilla”, opens with a burning, immediately head-hooking riff that writhes and pulsates with chaotic life, but changes to something colder and more cruel as the snare strikes reach even further heights of frenzy, and more variations in rhythm and mood are still to come.

Elsewhere, the whirring riffs, edged with dissonance, are grim and bleak, glorious and seething, dervish-like in their wildness and ominous in their feeling of implacable menace and terrible majesty. In some of the songs there are brief breaks, when the cadence slows to a lurching movement or a menacing stomp, when the feeling becomes dismal, or stately and sinister. The songs may not last long, but long enough, and they don’t wear out their welcome.

Although “cacophonous” is the wrong word for this EP, even if primordial chaos is what it seeks thematically, the EP as a whole does comes to a close in a genuine cacophony — a final track that’s a short, sharp shock, an abrasive storm of destructive electronic noise that explodes in searing tones and distorted voices. And it’s then an easy decision to go back to the beginning and start again (though the next time you will have figured out that it’s best to take some deep breaths, because you’ll need the extra oxygen).

Burning The Eternal Return ie being released today as a digital download, and it will also be available on cassette tape (limited to 100 copies) through the Chilean labels Herejia Prods and Street Metal Blasphemy. The EP was produced, recorded, and mixed by Danilo Vergara, and was mastered by Michel Leroy. The cover art is “Fyre” by Igor Carotti. More info is available through these links:

3 Responses to “AN NCS EP PREMIERE (AND A REVIEW): LUX NIGRUM — “BURNING THE ETERNAL RETURN””