(This is Evan Clark‘s review of the new album by Virginia’s Inter Arma, which was released by Relapse Records on April 12th.)

There are few pleasures like that of rediscovering a beloved band through a new release. In 2016 I discovered Inter Arma through their then-new album Paradise Gallows and I was quickly swayed and enamored with their unique take on blackened metal. I am remiss to say that I did not spend much time digging into their back catalog, but that may have to change. With Sulphur English, the band’s fourth full-length, the Virginian quintet return to bludgeon listeners with another sample of dour, unhinged, and apocalyptic metal. Precision, beauty, and the juxtaposition of those two traits with sheer destruction were the defining qualities of that earlier record. On Sulphur English, the band have taken those qualities to new levels, and have left a trail of misery in their wake. 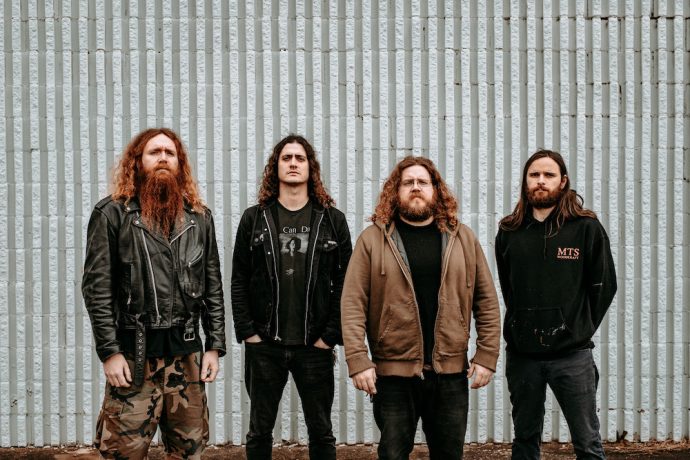 The album begins with the simple instrumental ‘Bumgardner’, the occupational surname for someone who tends an orchard or garden, as well as a touching tribute to Bill Bumgardner of Lord Mantis, who unfortunately passed away in recent years. A lot is conveyed in this short intro, but the most important aspect is that of impending doom. Like the album at large in some ways, there is a sense of mourning and quietus involved in this track, and it is a perfect calm before the almost unstoppable storm that lies ahead.

As a whole, the record is a slow burner, but I never once felt like it was taking too long to make its points. It moves with steady precision, laying down finely crafted riffs and methodically performed drum fills that scrap the mind and pull you closer and closer to a proverbial edge. This is music designed as a soundtrack to slow, impending, real-world destruction. Salted earth and burned gardens are left in the path of this album

Genres are always being played with, blurred, cross-stitched and mangled together in modern day musical scenes, for better or for worse. This is true as well of Sulphur English, as the band continue their slow descent into harrowing lands of death metal, yet are still confident in their sludge and black metal territories as well. The track ‘Citadel’ is a perfect example of this mixture, with some truly impressive guitar work that crosses various musical lanes, with the backdrop of a remarkable vocal performance. Dual vocals ring out as death growls are aligned with dissonant and tortured screeches. It’s a sublime ugliness.

There are also wonderful moments of acoustic bliss on the track ‘Stillness’, the midpoint of the album, which like the other tracks features a slow build toward a climactic and gnashing finale. This is the music that would play during the point of no return in a screenplay. The moments where all hope is lost, oblivion beckoning toward the end. The vocal performance is simple, soulful, and clean, yet it transitions into harsher, more aggravated and distressed performances later in the track.

There is a wonderful energy to be found on Sulphur English. The album is mixed with delicate hands, and while the denseness of the record might put some listeners off, those who do take the time to delve into its murky depths will not be disappointed. The highlight of the album comes toward the end of the record, with ‘The Atavist’s Meridian’. This is the longest track on the album, yet somehow the most engaging and satisfying. Like the other tracks, it features a slow build, but it also has some of the most frenetic and frantic guitar work and drumming on the album. It is claustrophobic, and intense. This is not only a highlight of the album, but a highlight of the year at large.