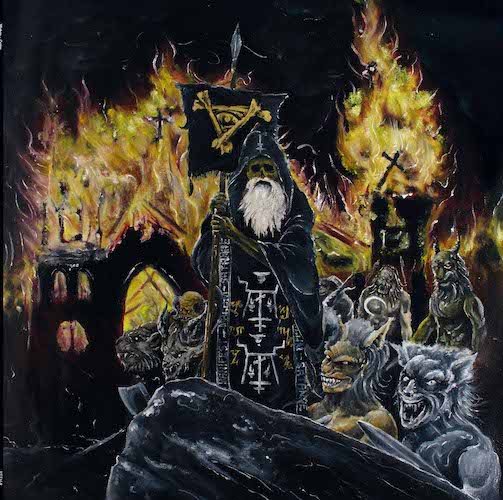 Devil-worshipping black metal has taken a multitude of shapes, but the word that comes to mind most frequently in listening to the new album by Malum is “glorious”. Unmistakably, the music within Legion carries the hallmark fire and ferocity of Finnish black metal, but the songs reach mythic heights, becoming magical anthems of praise and exaltation that electrify the senses. Yet Malum have a gift for creating the kind of dynamic changes that hold listeners in place for the full run, and so they also use their beautifully crafted melodies and ever-changing momentum to carry the mood into dark places where peril and tragedy dwell.

Malum have been a prolific force since their founding in 2013, with a multitude of EPs and splits to their name, in addition to three albums, of which Legion is the newest — and most signal achievement yet. It will be released on May 31st by Purity Through Fire, and we have the great pleasure of presenting a full stream of all its extravagant tracks today. 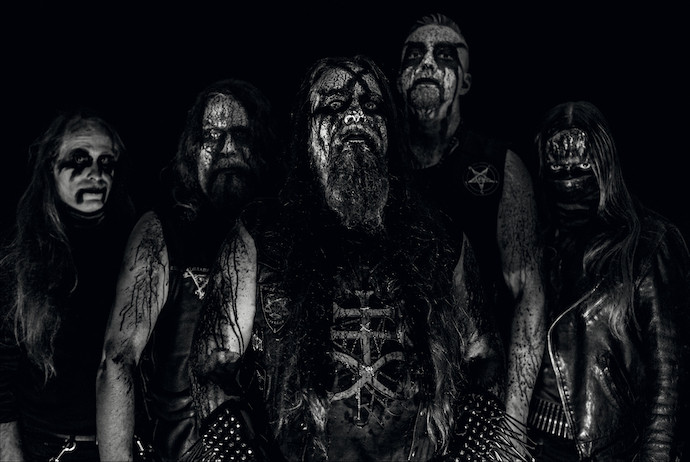 The first two entries on the album,”The Sun Devouring Dragon” and “Manifest Malum“, which flow together as one, blaze like the audio equivalent of a meteor rocketing across a midnight sky. They immediately reveal a remarkably vibrant production, mixed in a way that allows all the ingredients of the music to stand out in equal measure — and each contribution is worthy of attention. The combination of them on this opening duo of songs sends the blood surging through the veins, hammers the head, and makes you want to throw your arms to the skies in fierce exultation.

Here, the drum performance is maniacally fast but dynamic — a thrilling mix of ferocious blasting, rapidly tumbling progressions, and d-beat rhythms, matched by the vibrancy of the deep, thrumming bass tones. The riffing is incendiary… and glorious… soaring and sweeping, pierced by wild, flashing, rippling leads and by absolutely scorching vocals, whose barbaric shrieking expulsions put a shiver down the spine. Segmented by hard-rocking beats and pulsing chords that add a classic heavy metal flavor to this musical feast, the tracks are an explosive and inspiring one-two punch to start the album.

After such a breathless start, you might expect a more subdued follow-on, but “Sexual Demon” is fast and fiery as well, but not a clone of its predecessors. It features another dynamic drum performance that introduces new progressions and rhythmic variations, again joined by an equally spirited bass companion, but the song is as grim and cruel as the opening tracks were magnificent. The song is laced again with leads that are no less scintillating, yet for the first time, near the end, Malum slow the pace, the rhythm section diminishing into a lurching march and the riff creating a manifestation that’s dismal and doomed.

“Days of Slaughter and Destruction” might be the shortest track on the album, but it still makes a deep impression. Moving in a mid-paced, swinging cadence, accented by big ritualistic booms and powerfully neck-wrecking rhythms, the song features shining guitars that create a sense of ominous and otherworldly majesty. The vocals, as always, are blisteringly intense, helping to drive the track to a grand yet forbidding finale fueled by a flurry of double-bass artillery.

For a song that’s nearly nine minutes long, “Blessed by the Devil’s Blood” proves to be one of the most infectious tracks on a persistently memorable album, even as it reveals different emotional dimensions. Launched by pummeling drums, its first searing riff has a melancholy air — a kind of feverish desolation in its sound — which alternates with a more methodical and stately rhythm as the guitars ring out, pealing like forlorn voices singing their solemn laments. The music eventually erupts in an effusion of hammering drums and soaring, trilling guitar that combines a feeling of terrible bleakness with a sense of panoramic, majestic beauty. And as if the track weren’t already dynamic enough, it moves through sequences of variable, rocking beats as a striking riff cycles through your mind, becoming more and more penetrating and indelible as it moves through its changes.

As mentioned earlier, one of the album’s true strengths is that Malum continually introduce new variations into their songs, while maintaining a stylistic through-line that’s unmistakable. They do that again with “Luciferian Legion“, whose melody is immediately gloomy and perilous, augmented by an off-kilter drum pattern and a bass line that slowly moans — while alternating with bursts of rapid-fire double-bass and delirious guitar frenzies that intensify the feeling of emotional splintering. Throughout, the song has a palpably otherworldly atmosphere, even as it presents gleaming vistas which arrive over a jolting, skull-shaking bass-and-guitar pattern. Soaring clean voices rise up in hallowed praise at the end, when all the instruments join together to create a magnificent crescendo before the music drifts in haunting fashion into the ether.

By the final track, it’s hard not to have high expectations for how Malum will bring the album to a close — and they don’t disappoint. “Ajattoman Viisauden Loisteessa” is an immediate conflagration of barbarous drumming and burning chords, but quickly delivers a transfixing melody that channels a sense of defiant striving on a mythic scale. When the drumming slows, the music becomes grand (another word that continually comes to mind), accented with fast-jabbing chords that will again get your head moving. A brief but absolutely beguiling guitar harmony provides a bridge to a riveting solo that only adds to the mythic aura of the music. It’s a song that has visceral, carnal appeal yet is also mesmerizing, and provides a fittingly glorious close to a glorious album. The closing melody rings in the mind long after the album ends.

Legion features cover art by R. Ärling and layout by M. Lehto (October Falls). It was recorded, mixed, and mastered by Hex Inferi (Horna). The album will be released by Purity Through Fire on the 31st of this month in CD and vinyl formats, and digitally through Bandcamp. For more info about the release and how to obtain it, check these links:

2 Responses to “AN NCS ALBUM PREMIERE (AND A REVIEW): MALUM — “LEGION””