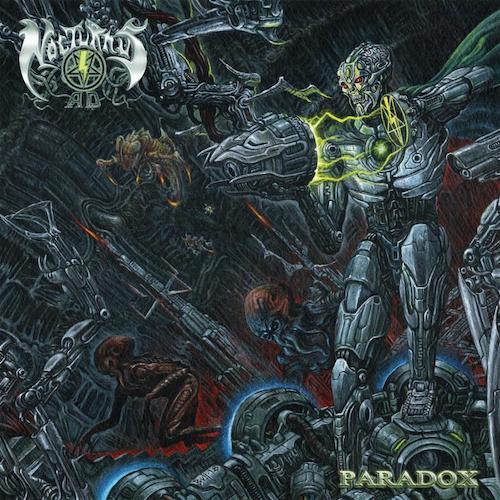 (Todd Manning prepared this review of the new album by Nocturnus AD, which was released late last week by Profound Lore Records.)

There is a small but dedicated group of metalheads who have been waiting a long time for a new record from Floridian Sci-Fi Death Metal powerhouse Nocturnus. Well, the wait is finally over. They have returned, now known as Nocturnus AD, and their new album Paradox dropped on May 24th.

Most fans consider their first album, 1990’s The Key to be their best. Nocturnus’ style was jarring to say the least, and at the time, it certainly triggered strong opinions both positive and negative from Death Metal fans worldwide. The production was cold and the band’s technical Death/Thrash hybrid could be bizarre at times. The most divisive element, though, proved to be their heavy use of keyboards. In the early days of the genre, this amounted to pure heresy. 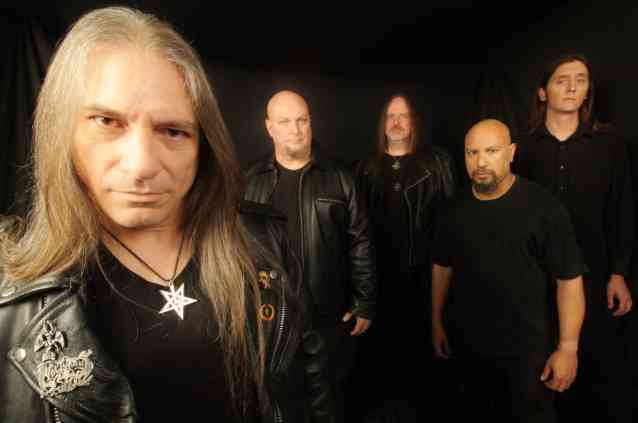 They released their sophomore album Thresholds in 1992, split up in 1993 over musical differences, and lay dormant for years.

Nocturnus briefly revived in 1999 to release a third album, Ethereal Tomb, with a different lineup, most notably without founding member and former Morbid Angel drummer Mike Browning. The style on this record was more straightforward, and though the keyboards were still there, their presence was not as dominating. Honestly, it’s a damn fine album but it didn’t really capture the classic Nocturnus sound. Despite the strong material, the fans were left wanting more.

Which brings us to Paradox. Mike Browning is back, and the group is now known as Nocturnus AD due to copyright reasons. Not only is Browning back, but so is the band’s classic style, sounding like the logical successor to the first album. Paradox opens with a ripping statement of intent, “Seizing the Throne”. After a pummeling intro, the true Death Metal kicks in. The opening lyrics set the stage:

“Satan takes his place,
upon the throne of the fallen God”

It’s a goddamn powerful way to start off the album. The sound is classic but far from stale. If anything, Nocturnus navigated similar territory to another contemporaneous Floridian band, Hellwitch, whose Syzgial Miscreancy is an absolutely underrated classic. Both combined Thrash and Death Metal, with Nocturnus being a bit more Death-focused. Both were technical, but too raw to really be classified as Tech-Thrash or Tech-Death. Both had a penchant for shredding, yet included unpredictable and off-kilter guitar leads. There’s a savagery in both bands that make them timeless.

It was the keyboards, so controversial at the time, that have always been the band’s calling card, and Nocturnus AD aren’t afraid to place them prominently in the mix. It’s hard to pick a spot where they make the most impact, but one such moment might be about halfway through the second song, “The Bandar Sign”. After a couple of verses of mid-paced Morbid Angel-ish material, the pace picks up and the keyboards dive in with a fit of atonal madness. The sound is like Sun Ra has been resurrected from the grave as some sort of demonic cyborg synth player. The guitars trade frantic leads between the electronic squalls, and eventually all the instruments duel with each other for a weird supremacy.

Paradox quite appropriately seems to oscillate equally between an indefinable weirdness and quite memorable material. Sometimes the keyboards act as a gravitational center, the block chords and swells providing a solid foundation for the guitars to mount their obtuse and shredding assault. Sometimes, as mentioned before, the keys launch into crazed squalls of unpredictability, with the guitars slipping into the more traditional supporting role. Then at other times, such as on “The Antechamber”, the guitars will start playing what can only be described as Middle Eastern-style melodies, once again providing another hook for the listener to latch onto.

The album tends to reveal all its surprises in the first few tracks, but there are so many elements to the sound that it will still take the listener the entire length of Paradox to digest everything. Nocturnus AD’s material shifts tempos at a rapid pace, sometimes even mid-riff. The vocals are commanding and weave a path through the instrumental madness, and may in fact be a large factor in why Paradox is memorable almost in spite of itself — as in the aforementioned opening lines, or in the roaring of “Procession of the Equinoxes”, when the vocals are brutal yet intelligible, at least to the degree that one can certainly growl along with key moments in the songs.

For all their far-reaching, occult Sci-Fi weirdness, Nocturnus AD capture the raw intensity of Old School Death Metal. The originality they brought to the table back in the day surely expanded the parameters of what would become possible as the genre progressed. Paradox picks up right where they left off, and sounds as exciting and brutal as The Key did way back in 1990.