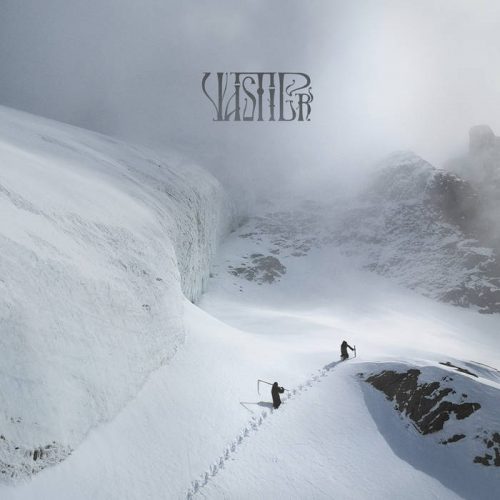 My mind is on Iceland today. Soon my body will be too. Ascension Festival looms ahead this week, set to begin on June 13th in Mosfellbær. Anticipating that event, I’ve drawn a few connections with Iceland in today’s SHADES OF BLACK selections. My selections are numerous enough that I’ve divided them into two Parts. Part 1 includes advance tracks from forthcoming albums. What I have in mind for Part 2 are three or four full releases. If I can’t finish writing Part 2 in time to post it today, you’ll see it first thing Monday morning.

However, I’m doubtful you’ll see a SHADES OF BLACK here next Sunday, which will be the day after Ascension concludes. Maybe I’ll be able to scrawl a few words about the just-concluded festival, but probably won’t be able to prepare another one of these columns. For Part 1 of today’s column, the organizing principle is subjective impressions first, objective info second.

Despite the imposing wintriness of the cover art, this first song has the ebullient mood of a thronged carnival in full swing. The reverberating notes sparkle and dance, soar and swirl. The music grows more frenzied, ever-bursting with extravagant drumwork, and darkness creeps into the atmosphere even before the manic exuberance briefly abates, and moodiness descends. 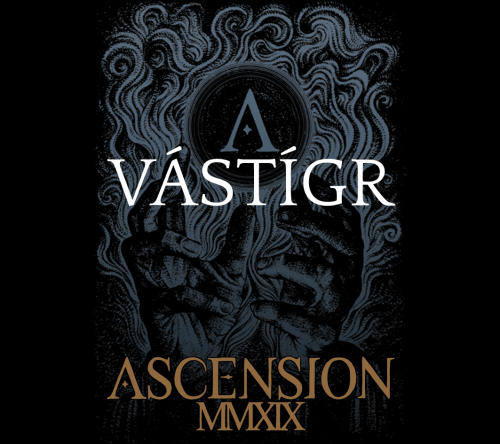 Yet even in the moments when the riotous drumming and roaring vocals fall silent and the music becomes melancholy, the gleaming guitar melodies prove entrancing. If winter is in the music, maybe it’s the iciness of a blizzard lit by the sun, carrying us aloft amidst the shining snowflakes, scattering in the wind.

“Ouroborus” is the second track on Aura Aeternitatis, the debut album of the Austrian band Vástígr. It was produced by Stephen Lockhart (the maestro of Ascension Festival — at which Vástígr will deliver their first live performance) at Iceland’s Studio Emissary, and it features cover art by Metastazis based on a photograph taken by Benoit Fabre. I’m not sure when the albm will be released. However, this single is available for download now: 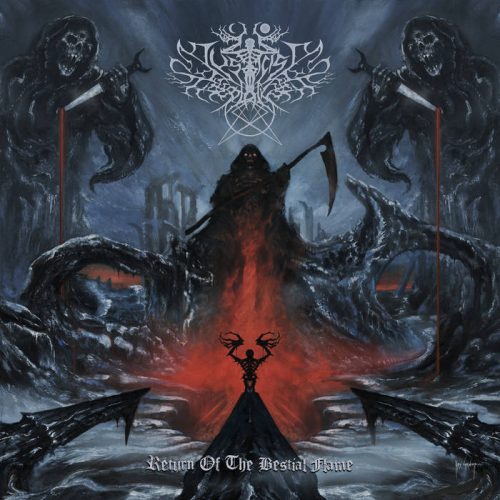 This next song is a long one, and a variable one. Like the first track above, this one also made me think of a carnival (but a demonic one in this case). There’s a darting, calliope-like quality to the opening keyboard melody, and an increasingly frenzied energy as the drums begin blasting and the scorching vehemence of the vocals enter the frame. The song spins like a whirlwind of razors, mounting toward heights of savage mayhem.

Other ingredients eventually come to the fore — rapidly jabbing riffs and tumbling drum progressions, slithering leads and pummeling double-kicks, an interlude of ringing chimes and spectral pulsing tones, a squalling solo over bombastic percussion, gravelly growls and incinerating shrieks — but this grand, dynamic progression remains joined together by that calliope-like motif that persistently glimmers in the mind, like an expression of Bacchanalian joy.

“Return of the Bestial Flame” is the title track to the second full-length by this Washington State band, whose members consist of OldNick (Nick Superchi, who does everything on the album but the drums) and drummer Blood Hammer (Mathew Mattern). It will be released via Crowned Underground on June 28th. The fantastic cover art is by Kris Verwimp; the album was mixed by Mysticism Black and Joel Grind, and mastered by Joel Grind. 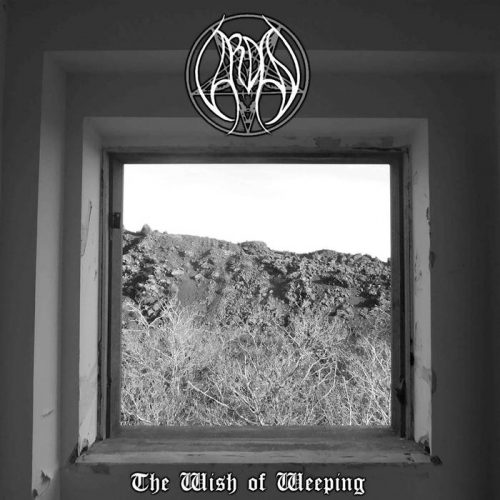 The next song is another long one, but very different from the Mysticism Black track. Although it’s slow and solemn in its pacing, it still operates like a vortex, inexorably drawing the listener downward into a place where sorrow reigns. The melody, which unfurls in a mix of tonalities both rough-edged and ethereal, is dreamlike and even beautiful, despite the moaning and wailing grief that so palpably inhabits it.

The vocals are a marvel, ranging from clean song to manifold expressions of terrible agony; they’ll keep you alert, when everything else is working to create a spell. But if you’re like me, you’ll sink deep into this seductive darkness anyway, slowly drifting all the way down into a realm where naught by ghosts await.

“The Wish of Weeping Pt. 2” is the name of this piece. As the title might suggest, it’s one of three long parts on an album entitled The Wish of Weeping — which is this one-man Italian project’s 32nd (!!!) full-length album. It will be released by Moribund Records on July 26th. 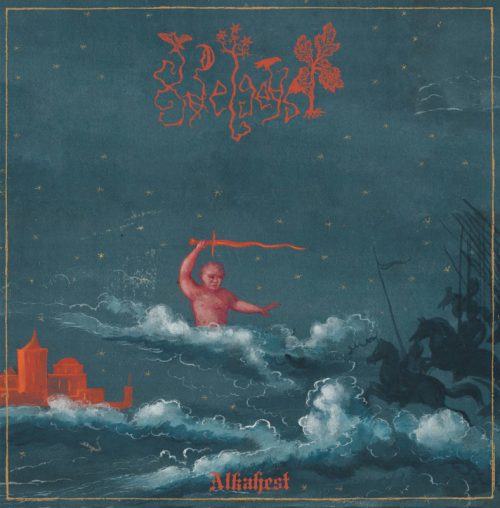 After that last piece of sorcery I thought we’d kick the adrenaline into high gear with this next song. It doesn’t take long for that to happen, thanks to the hammering bass and drums, and the pulsations and cascading swirls of the riffing, which initially has a dismal and discordant quality. There’s a wild and weird quality to the music as well, as it builds to crescendos of whirling mayhem and fierce, hellish joy, laced with bursts of bounding drumwork and extravagantly crazed vocals.

The song sinks its claws into the brain, shakes it hard and sets it spinning like a top. Both feral and fascinating, it proves to be so addictive that I’ve re-played it often since first encountering it last week.

“In Schall und Rauch zerflossen” is one of two tracks that have appeared so far from the debut album Alkahest by this Swiss band, whose members are part of of the Helvetic Underground Committee. The single is available for download through Bandcamp. The album will be released by Vendetta Records on June 12th. You can listen to the other track, “Demiurg – Denaturierung Holobiont“, at CVLT Nation (here), who characterized it as “a European version of Negative Plane or a more experimental reinterpretation of the arcane mysticism of Mortuary Drape“.

(Thanks to eiterorm for pushing me to explore this music.) 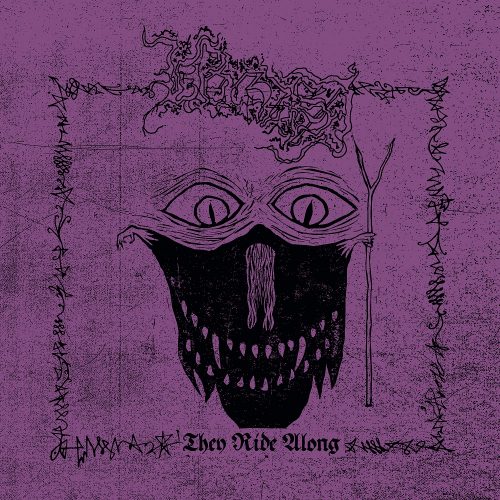 To close Part 1 of this collection, I’ve turned to another song that has a feral, carnal quality — and this one will get your adrenaline pumping too. It mixes punchy, head-hammering rhythms with equally heavy riffing that channels cold-eyed and ultimately brutish cruelty. As the song becomes more crushing and miserable, the lunatic, shrieking vocals transform to wild wails and cauterizing cries, but it swells again like a building storm, erupting in a final surge of savagery… before ending in unexpected fashion.

The name of this final song in Part 1, which has a paranormal feeling to go along with its animalistic qualities, is “Irrsinnsdimensionen (A Bath Amidst the Wells)“. It was created by Hagzissa, an Austrian black metal band founded in 2016 by B. Moser (also in Kringa), who performs vocals on the album and is joined by three instrumental bandmates.

They Ride Along is the name of the album that includes this song. It will be released by Iron Bonehead Productions on August 23rd.