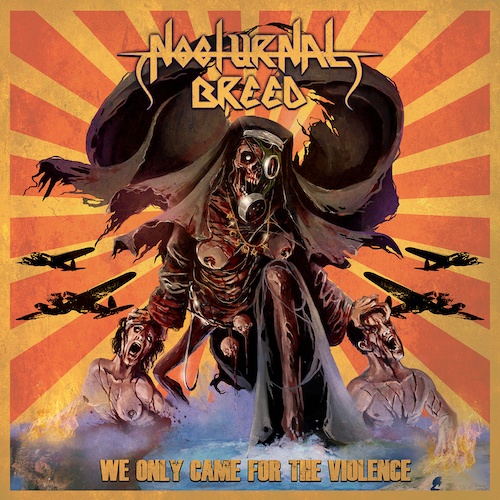 As you make your way through the new album by Nocturnal Breed, you might get flash after flash of past glories — memory bursts of Nuclear Assault and Accept, of vintage Metallica and Megadeth, of Celtic Frost and Black Sabbath, of Motörhead and Venom, of King Diamond and Iron Maiden. It’s as much a matter of spirit as of sound, the feeling of fire in the blood and steel in the hand, a dedication to metal domination that won’t be diverted or denied. The music rips and rages, and revels.

Of course there’s a difference between trying to clone the music of legendary bands such as those mentioned above and revealing the influences because it’s what you love, because it’s part of your DNA and thus works its way naturally into what you do, without calculation. That’s the feeling of this new record, We Only Came For the Violence, the sixth full-length by this Norwegian speed metal cult in a career that goes back to the mid-’90s. This is a hell-thrasher’s record, but one in which the backbone of thrash is fleshed out in other ways that channel the band-members’ inspirations and interests. The result is a record packed with killer riffs, razor-sharp rhythm-section work, and vocals that send chills down the spine.

It’s also the kind of dynamic experience that gives every song its own character, and we’ve got a prime example of that in the contrast between the first song revealed from the album and the one we’re premiering today. 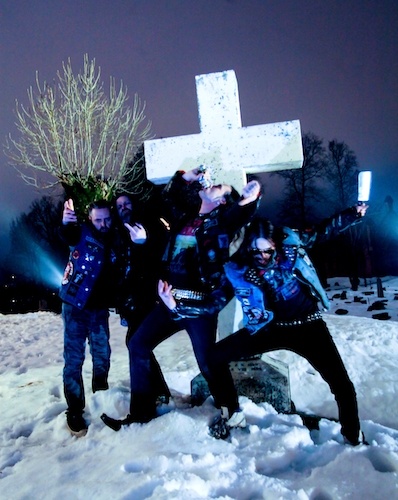 That first song, “Choke On Blood” (a stream of which you’ll also find below), is a speed metal rush that gets the blood pumping fast and hard. On the other hand, the song we’re premiering today — “Sharks of the Wehrmacht” — is just down-right evil.

Mid-paced in its tempo, the sound is cold and cruel, but also brazen and intense — and powerfully head-moving. The main riff is heavy-metal gold, the leads seethe with venom, ripple with delirium, and sometimes cast a pall of gloom, and S.A. Destroyer sends his wide-ranging voice into the stratosphere, pushing the track’s intensity into the red zone. It will get stuck in your head, too — like every other track on this album.

Anyone who’s read any interviews with S.A. Destroyer knows that he’s fascinated with the history of warfare, and in particular with the two World Wars, spawned in part by his own family’s history (which includes grandparents who fought against the Nazis in the Norwegian navy and in the resistance, and one of whom spent time in a concentration camp). Previous Nocturnal Breed songs have focused on the horror of specific events in those conflicts, as well as the Vietnam War. “Sharks of the Wehrmacht” is another one of those songs. As for its specific inspiration (and how it has already been misinterpreted by some people from the song title alone), we received this statement from S.A. Destroyer in response to our request for a comment:

“‘Sharks of the Wehrmacht‘ was made for 2 distinct reasons. The first is quite simple. I heard someone on a TV documentary say bla bla bla ‘Hitler’s hench-men were like “Sharks of the Wehrmacht”‘, and that instantly painted a great storyline and song in my head. And as I took this to our drummer Tex, he instantly kicked on it too. And the first thing that struck us was: We have to do this, it’s a fucking must.

“In these days of over-sensitivity growing to infantile heights, shit-weavers pull the Nazi card on everyone who dares get close to subjects like this, purposely misunderstanding completely the rebellious and confrontational nature of extreme metal. Branding provocateurs of the free word as political and using veeeeery fascist-like ways to force their illiterate ways on others. No, Fuck that we say, and chew on this old bone from the history books. If this is too hard for your over-sensitive soul, well, dig a fucking hole and go lay in it. The world needs to face the shit in a pure sense, so take your bullying ways and direct them at those who actually are into the politics of this and the actual devilry of business and politics. That is where the greater evil is, not in the fucking music scene…

“Apart from that, this song is 100% inspired by my personal love for ACCEPT’s Russian Roulette album. Cold war heavy metal !!! 😉 “

We Only Came For the Violence will be released by Folter Records on June 28th, in variant CD and vinyl editions. It features eye-catching cover art by Maggotmeister. In support of the record, Nocturnal Breed will be performing at a trio of upcoming festivals — Under the Black Sun (Germany), Hellbotn Metalfest 2019 (Norway), and Eindhoven Metal Meeting 2019 (Netherlands). For details about those and other appearances as they’re announced, follow Nocturnal Breed on Facebook.

TRACK LIST:
01 Iron Winter (Intro)
02 Choke on Blood
03 Nekrohagel
04 We Only Came for the Violence
05 Frozen to the Cross
06 Desecrator
07 Cannibalized by Fear (Intro)
08 Sharks of the Wehrmacht
09 Limbs of Gehenna
10 War-Metal Engine
11 Can’t Hold Back the Night
12 Bless the Whore
13 A Million Miles of Trench