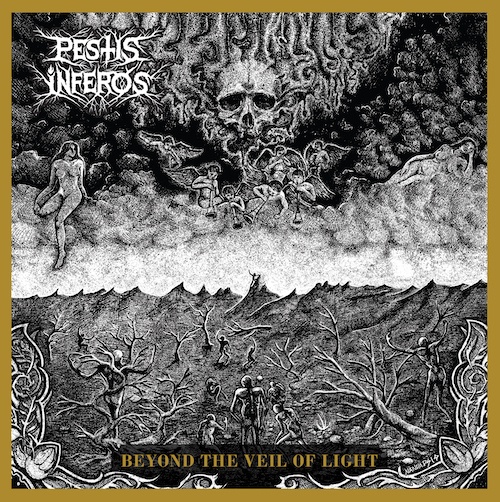 Syracuse, New York, is home to a malevolent new black metal entity who’ve taken the name Pestis Inferos. Their debut EP, Beyond the Veil of Light, is a ruthless statement of intent by this hellish trio, and today, in advance of its June 24 release date, we reveal a new track from it that’s  fittingly entitled “Within the Darkness, I Dwell“.

When the band first began to take shape in the spring of last year, there were not-entirely-serious musings about embracing Darkthrone worship, but as the songwriting began, the direction shifted more in the direction of Dark Funeral (which perhaps explains the name of the EP’s opening song, “From Throne To Funeral”). The song we’re presenting today is certainly heavy as hell’s gates, and the kind of powerhouse track that is at once cold and cruel, and fiery and ferocious. 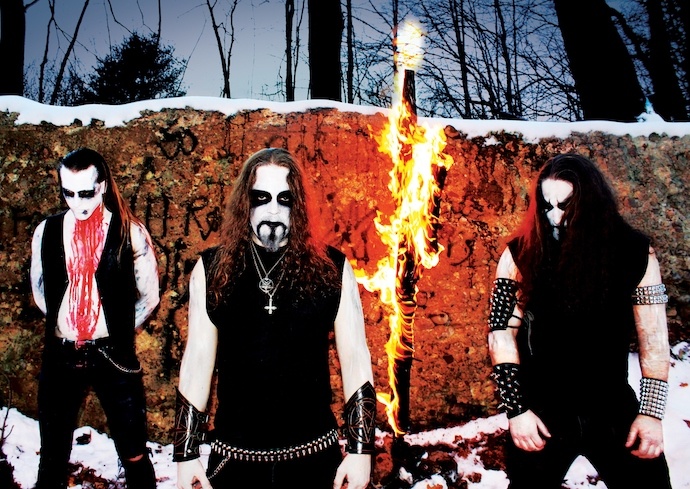 The heaviness of the song, and the megaton power of the sound, is immediately apparent through the explosive drum and bass detonations and the huge hammering riff that sets things in motion. Bursts of boiling fretwork frenzy foreshadow the savagery to come, which becomes manifest as the music leaps forward in a gallop, surging with an incendiary thrashing riff and equally scalding growls. And then the music makes another leap forward in a fury of blasting and thundering drums, while the atmosphere of the riffing becomes both more dismal and more demented.

Feverish melody spears out of this riot like lightning strikes, but the song returns to that gigantic, oppressive stomp from the opening, this time accented by volcanic double-kicks and a ghastly howl, before the band unchain one last barbaric, boiling, and blasting onslaught.

Beyond the Veil of Light was recorded live in the studio, and includes cover art by Nanda Dika. The EP is available for pre-order now at Bandcamp, where you can listen to another song from the EP — “Invoking the Sigil”.

Now, brace yourselves, and press play below.

4 Responses to “AN NCS PREMIERE: PESTIS INFEROS — “WITHIN THE DARKNESS, I DWELL””