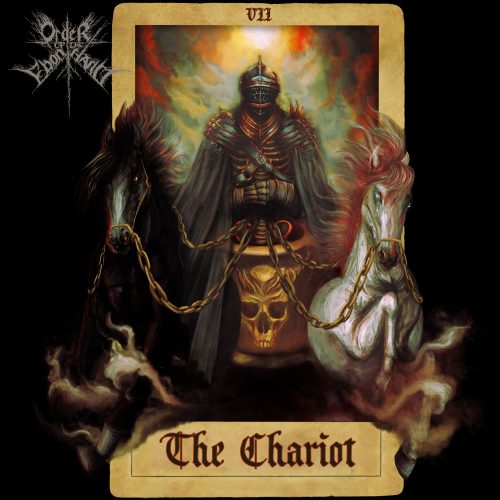 With their second album, released in 2005, the Greek band Order of the Ebon Hand began drawing Tarot cards from an unholy deck, embarking on a plan to explore the signs of each card drawn through the perspectives of black metal. The plan has been slow to evolve. That second album, XV: The Devil, followed the band’s 1997 full-length debut by eight years, and their new album, VII: The Chariot, is now arriving a long 14 years following the second one. It is so sweepingly powerful that we can only hope the next card in the deck will be revealed much sooner.

Today marks the official release of VII: The Chariot by the Russian labels Satanath Records and More Hate Productions, and coinciding with the release we have the good fortune to debut a full stream of this tremendous album — preceded by a flood of thoughts about the experience. 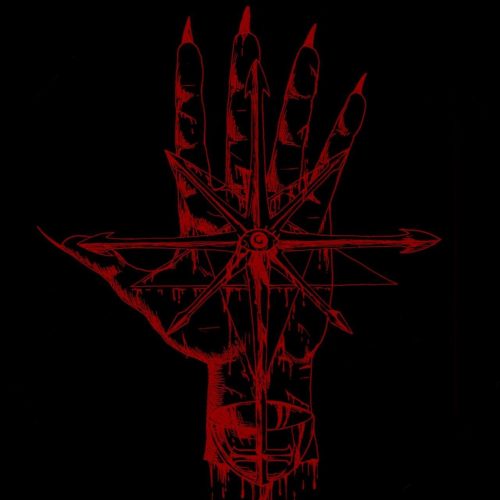 This is an example of an album that matches supremely dramatic lyrical themes and concepts with music of equal dramatic scale and emotional force. The releasing labels (or more likely the band) describe the occult Tarot-based concept of the album in these words, which we quote at length:

“The Chariot” is the Card connecting Mars to Saturn, War and Fate. Appropriately, the album is a rash, remorseless, and Warlike creation of Archetypal Black Metal, pacing on the principles that define all pure Metal. The Fights between Identity and Death, Freedom and Oblivion, surround the Entirety of the Album.

Conquest is synonymous to mobilization whether be it mere steps or a full headlong charge to the Complete Unknown.

The faces of War appear, whether be it in Sea, Land, or Air, and the CHARIOT changes Shapes. It metamorphs from Destroyer Ships, to Nightmare Steeds, Aerial Fighters, Armored Demons, Heavy Cavalry Knights, Elite Infantry, Ancient Heroes, and Demon Kings, all bound to a merciless Race, in which, after the starting gun,there is No Turning Back.

But the Enemy is Unclear. For moments it is the Obvious. Then it mutates — as well, it becomes Imprisonment, Insomnia, a wish for self-destruction, Restlessness, Duty, Addiction, Defeat, then Death personified — ultimately the Inevitable Fate that Haunts the mundane.

“The Chariot” then becomes the means to Exceed the Chariot Itself. The Vehicle, whether it be Weapon or Body, is merely an Instrument, and not the Self. The Conquest itself, becomes a Trial of Realization, its purpose to Destroy all the Illusions of Life — that would prove Oblivious at the Ultimate Hour!

You see? What dramatic, archetypal themes these Greek artists have embraced, guided by the Tarot’s symbology. And they have done justice to those themes through these 8 beautifully crafted and expertly executed songs. You can hear the translation of the conceptual themes in the music, but (at least to this listener) the songs channel other emotional sensations as well: The music is inspiring to the point of becoming transcendent, but it is just as persistently heart-breaking. The album becomes a great pageant of turmoil, torment, terror, and inconsolable anguish.

“Pageantry”, “power”, and “grandeur” are among the words that continually surface in reflecting on the album (in addition to “warlike” and “violent”). With a clear and commanding production, the album delivers the kind of large-scale, all-enveloping, and immersive sound that rivals the force of a symphonic orchestra (though the use of keyboards here is usually subtle and judiciously employed), and the melodic themes play out like a theatrical drama on a vast stage.

If you subscribe to the idea that bands should begin their albums with an opening statement that seizes attention and exerts such tremendous force that listeners feel compelled to move deeper into the record, you will admire what Order of the Ebon Hand have accomplished with “Dreadnought“. Launched by the reverberations of chiming and swirling notes over a heavy low-end current and a pounding, physically compulsive drum-beat, it unfolds in a way that creates a mix of sensations — of solemn grandeur and fervent praise, of ominous foreboding and titanic ascension. It’s a head-moving but also memorable song, especially the slow, sinuous solo, which is both exotically serpent-like and grief-stricken, and then spirals up and out in anthemic fashion, becoming a fret-burning spectacle. And that potent solo is followed by a ravishing finale accented by giant ritualized drum booms.

“Dreadnought” also introduces us to the astonishing intensity of the vocals, which become another hallmark of the album. This rapidly transitioning array of caustic snarls, choking gags, and fervent cries are redolent of fanaticism and fury (but are also somehow well-enunciated), and as the album progresses you’ll find still more variations in the vocals.

The follow-on track, “Μόρες“, creates an immediate contrast through an attack of blasting drums and frenetic tremolo’d riffing, becoming a mad, exultant whirl of feverish sound, with vocals that sound even more extravagantly vicious than on the opening track, and vibrating guitar leads that resemble (at least in spirit) the flight of the bumblebee (the interlude by Rimsky-Korsakov). You might not expect the song to be as spellbinding as it is, or as surprising — with dramatic piano chords surfacing and then carrying the song to its conclusion.

It’s really not until the third song, “Wings”, that the more melancholy shades of the album begin to surface (though they become a recurring and more intense presence thereafter). As a transition from the previous song, grand, skittering, contagious chords and vibrant drumwork open this scintillating race, which creates both a cruel, bleak atmosphere and manifestations of ravaging desolation. Rising melodic accents resemble magisterial horns announcing a grim coronation in the midst of a battle zone.

Aided by scorching guest vocals by Rotting Christ’s Sakis Tolis, “Sabnock” pushes the album to even greater heights of emotional potency, with assaulting drums and whirring riffs setting the stage for dramatic swirling leads that channel moods of heart-breaking tragedy through a fire-bright blaze of sound.

In another contrast, a slow, somber acoustic guitar melody over the sound of whistling wind provides the intro to “Knight Of Swords“, creating a feeling of isolation and moodiness. But that’s wiped away in a flash by booming timpani and a cyclone of rampant riffing. The band’s devotion to displays of inspiring grandeur and heart-breaking agony is again front-and-center, and there is again tragic beauty in the melodies, while the vocals move seamlessly among tortured growls, soaring shrieks, and wailing cries — and the sound of demented laughter, which caps a stupendous finale.

The prevailing mood of “Αίαντας” is again one of sweeping grandeur and terrible tragedy, though it’s also thunderously warlike (and it includes a shift to a methodical rocking beat and a head-hooking heavy metal riff), while the bleakness and frenzy of “Bael” portray turmoil and torment on a larger-than-life stage.

As the band’s conceptual narrative forecasts, death arrives in the album closer, “The Slow Death Walk“. It is indeed slow at first — a stately drum rhythm provides the anchor for slow, dismal chords and weeping notes against a backing shimmer of sound that gives the music a mystical gleam — but it becomes more boisterous and vibrant. A pinging keyboard melody transforms into a sorcerous swirl over a jolting, hard-jabbing riff and rapid-fire drum fusillades (a recurring refrain in this track). As the riffing and the keyboard melodies continually cycle, they burrow into the listener’s head with the intensity of a fever, magnifying the panoramic and shattering intensity of this grand finale to a great album.

VII: The Chariot was recorded and engineered by Asmodeus at Marble Mountain Music, and it was mixed and mastered by V.Santura at Woodshed Studio. The cover art was created by Vamperess Imperium, and the band’s logo by Christophe Szpajdel. As noted at the outset, the album is being released today.

ORDER OF THE EBON HAND:
https://www.facebook.com/OrderoftheEbonHand666/

5 Responses to “AN NCS ALBUM PREMIERE (AND A REVIEW): ORDER OF THE EBON HAND — “VII: THE CHARIOT””