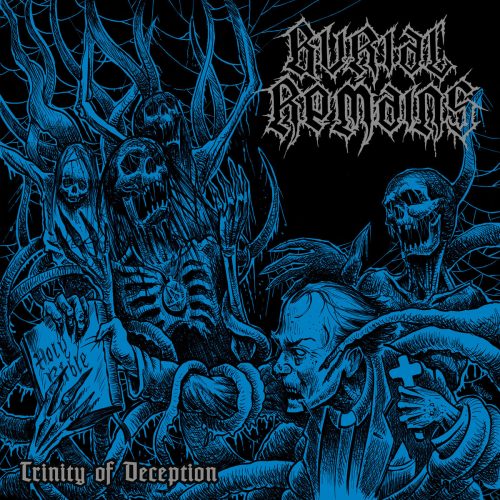 The devotion of Burial Remains to old school Swedish death metal is extravagant, and masterfully expressed. But it’s almost misleading to call the death metal of Burial Remains “old school”, because that assumes they’ve left the beloved institution still standing, when it sounds instead like they’ve taken sledgehammers to teh structure and then burned the remnants to the ground.

“Burn With Me” is in fact the name of the song from their debut album Trinity of Deception that we’re premiering today, in advance of its July 12 release by Transcending Obscurity Records. Actual flames do come to mind in listening to it, but perhaps more often the heated imagery is of the racing fever of a fatal disease. But those aren’t the only images spawned by the track. It proves to be a changing mix of rampaging violence, gruesome putrefaction, and funereal grief. 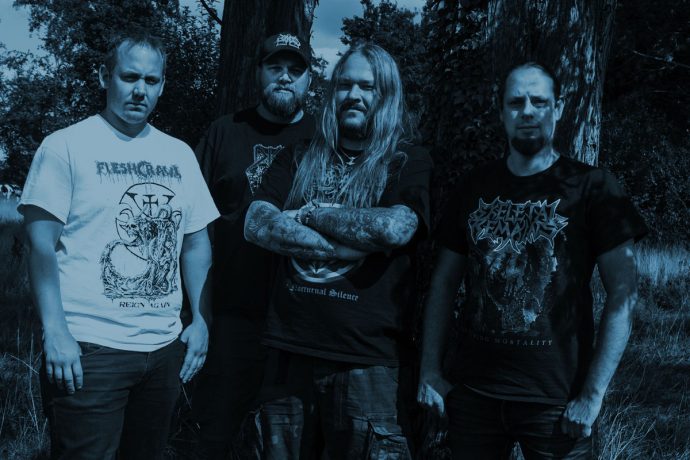 Everything about the album is well-executed by people who seem to know (and feel) this style of music like the backs of their hands, from the horrors of the cover art by Mortuus Art (of Sadistik Forest fame) to the mixing and mastering by Jonny Pettersson (of Wombbath, Heads For The Dead, and more) and the guest appearance on the track we’re presenting by Ralf Hauber (of Revel In Flesh, Heads For The Dead). But of course the principal credit goes to the band’s veteran line-up:

The power of the sounds they and their guest have created in “Burn With Me” (like the album as a whole) is gargantuan, thanks to the massive HM-2 guitar tone, the monstrous serrated roars and scorching demented yells, and the organ-liquefying bass and drum work, which hammers, leaps, and goes off like thunderous artillery. But there are other dimensions to the song, introduced by buzzing leads that seethe with infection and a slithering solo that oozes misery and rises to a pinnacle of despair. The song also displays persistently variable pacing — the music lurches, races, and drags like a dying leviathan. It gets the blood pumping hard, and is just as effective at sending shivers down the spine.

Not surprisingly, Transcending Obscurity recommends Trinity of Deception for fans of Grave, Entombed, Wombbath, Crawl, Feral, Heads For The Dead, Dismember, Paganizer, and Revolting. As further signs of what the album holds in store, three other tracks are already out in the world — “Crucifixion of the Vanquished”, “They Crawl”, and “Days of Dread” — and you can (and should) listen to those below as well.

3 Responses to “AN NCS PREMIERE: BURIAL REMAINS — “BURN WITH ME””