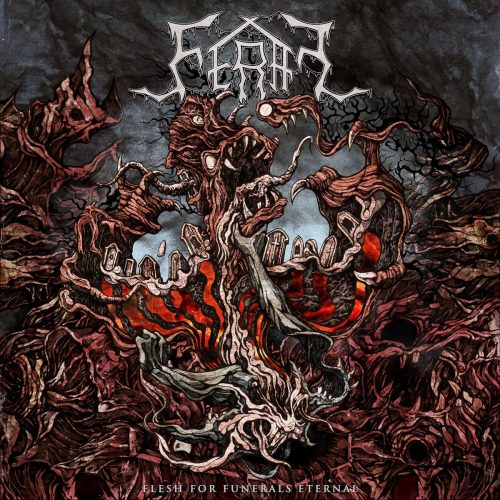 There are so many things to fucking love about this video we’re presenting today on behalf of the Swedish death metal band Feral. One of those things, which is memorable though not at the top of the list, is the chance to see a lyric video that begins with the word BLEH.

Another thing, higher up the list, is the evocative nature of the words that follow (actual words rather than phonetics — though a few more phonetic approximations of the vocal ghastliness would have been welcome). They make for a horrifying manifestation of death and disease on an apocalyptic scale.

The fact that you get to see Feral on stage delivering this riotous attack while the words flicker across the screen is another big plus.

But best of all is the sound of the song as a whole, in all its changing permutations. Even if you know the song like the back of your hand by now, it’s one that’s unlikely to ever lose its appeal. 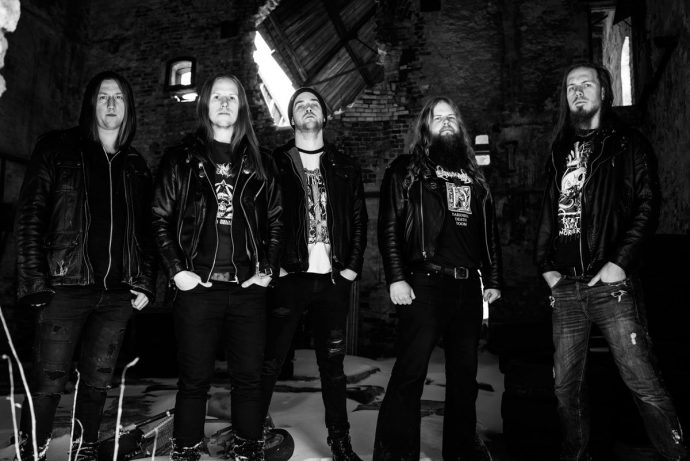 Feral don’t mess around with an intro to “Dormant Disease“. They go right for your head, right off the bat, with a gigantic chugging groove, lacing those titanic HM-2 tones and neck-snapping drumbeats with queasy, suppurating guitar leads. And then with a guitar bridge that sounds like boiling acid, they shift the song into a rampaging gallop, and that’s when the real neck-wrecking begins (along with the truly crazed vocal performance of those ghoulish lyrics) — though there’s a delicious, burbling bass performance in the midst of the romping rhythms and the bone-smashing, flesh-mauling destructiveness of the riffing.

There are other morbid and miserable melodic accents yet to come in the song, but none of them are miserable enough to dampen the adrenaline-pumping explosiveness of the music, and because Feral know what you’re yearning for, they give you one last massive chugfest at the end.

Speaking of things to fucking love, Costin Chioreanu once again created an eye-catching piece of wildly grotesque cover art for the Feral album that includes “Dormant Disease”. The name of that album is Flesh For Funerals Eternal, and if you haven’t discovered it yet, it’s s stupendously great expression of Swedish death metal in its prime.

Released very late last year, the album is out now on Transcending Obscurity Records, both digitally and in a variety of physical formats, along with related apparel.