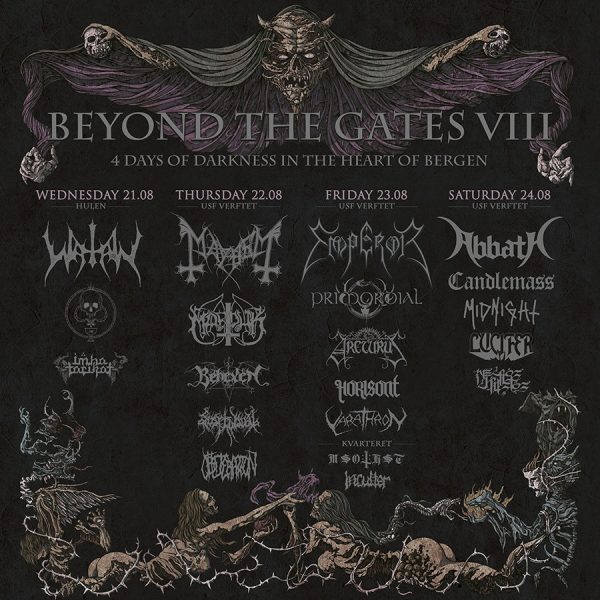 On August 21-24, 2019, the eighth edition of the Beyond the Gates festival will take place in Bergen, Norway, featuring a remarkable line-up of bands, headlined by Watain, Mayhem, Emperor, and Abbath. Our Atlanta-based contributor Tør was able to get the attention of BTG founder and principal organizer Torgrim Øyre, to discuss not only the upcoming event but also its history, and the predecessor Bergen festival Hole in the Sky. Our thanks to both of them for this interview.

Tell us a little bit about the history of Hole In The Sky/Beyond The Gates and how the idea for them came about.

Hole in the Sky was founded as a tribute to our late friend Erik «Grim» Brødreskift. He was a prominent figure in the metal scene in Bergen. Erik played with bands like Immortal, Gorgoroth, and Borknagar. Initially it was intended to be a one-off where friends from Bergen were paying their respects to their lost friend. The line-up was based on Bergen bands only. After the first festival, people kept saying that we should make it a tradition as there literally were no underground festivals in Norway at all at that point. This was pre-Inferno too. The festival quickly took on a life on its own. Slowly growing from the 300-cap venue Garage and moving into USF Verftet a few years later. It was an intense time. Not a lot of metal bands had played these shores before, so everything felt new and exciting. Everyone involved had very high standards for Hole in the Sky and after 12 years, we came to a point were we felt that we had done everything we could within that framework, so in order not to repeat ourselves and possibly compromise the quality of the festival, we felt that it was a good thing to put the fork in the road and end on a high note.

Beyond the Gates on the other hand was not intended at all. The idea came about after x-mas 2012. A lot of the Hole in the Sky regulars were talking about wanting to come to Bergen to hang out the last weekend of August, which is the same period when Hole in the Sky usually took place, just to meet friends and hang out. I was doing all the concert bookings for Garage at the time, so I figured I could talk to some band friends and see if they’d like to come over to do a show. Nothing fancy. It quickly evolved from there. I think we had 12 bands the first year. Still, the idea was to keep it small and intimate. No pressure or big headliners needed. It carried on like that for a while and the festival established itself as an underground event with a line-up pieced together by Ole from Terratur Possession, Stian from Metal Merchants, and myself. However a few years back we felt the need to make a change in order to make it more interesting, so you could say that we’ve put ourselves in a situation we sort of promised we’d never get back into. But I think the key is to focus on one year at a time. Who knows what will happen next?

What were some of the highlights from last year’s festival?

It’s hard to pick, really. The diplomatic answer is that all bands are presenting something worthwhile on their own terms. But I have to admit that seeing Tormentor back together and experiencing Enslaved playing Frost in its entirety was something else. Also Malokarpatan and Spectral Voice delivered some amazing sets. 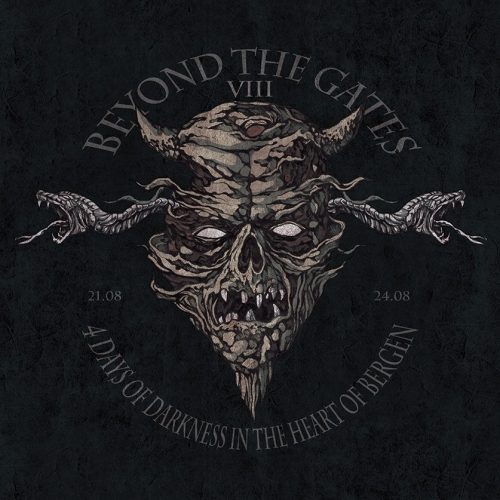 The lineup for this year is quite incredible with Mayhem, Marduk, Emperor, Watain, and Abbath all making an appearance along with a number of other excellent bands —how did you manage to get such a monster lineup together?

Sometimes the starts align, as they say. We had a pretty clear vision of where we wanted to go with this line-up, and that was to sort of try to present the whole scope of the black metal scene, especially the Scandinavian one, fleshed out with some favorites from elsewhere to add light and shade. We pretty much accomplished everything we dreamt off from the get-go. Sometimes you’re lucky and it all fits and sometimes you really struggle to make the pieces work together. This year was mostly smooth sailing and I think that shows.

How much organizing and planning does the festival take?

It takes a lot of planning, but we’ve been doing this for quite some time now, so there’s a lot of routine involved when it comes to the practical stuff. Some of us work with the festival in one way or the other around the year. We’re already deep into the planning of 2020.

What are some of the unique ways in which the festival appeals to an international audience?

I think the location has something to do with it. Bergen has always had a prominent metal scene and I think fans around the world find it sort of exotic to visit a relatively intimate festival in the same environment that spawned a lot of their favorite acts. It has a completely different vibe to all the huge out door festivals on the continent. That being said, we always go lengths to ensure that we have a line-up that works together with some sort of thread going through it. The whole package is extremely important to us – we try not to just throw together a bunch a great names on a poster. They need to complement each other too.

I know Watain are playing in a converted bomb shelter on the first night and that is super cool! Was there a deliberate attempt to combine history and place given the impact that Norway and Bergen in particular have had on the history of extreme metal?

Yeah, as I mentioned earlier – we’re trying to give people a taste of Bergen and also something unique. The idea behind the Watain show is to offer something really direct and in your face in a way you can’t experience on other festivals, as the band is in reality much too big for such a place, but both us and the band has some really great ideas on how to make it an extraordinary experience for the audience.

Outside of music, what does the city have to offer the festival-goers?

Lots of great beer and food – the festival will reflect that. And also quite a few nice hiking spots. The surrounding nature is quite spectacular.

Give us your recommendations for food and beer in and around the venues.

Apollon is a great record store that actually is a bar too, which is a tremendous combination. This place will sort of be our official watering hole. The spot where to hang out when there’s no concerts taking place. We also work closely with the people behind the famous Lysverket restaurant, which delivers the best seafood you could ever want. The same people are also running a fantastic pizza joint called Hoggorm. Pizza and dill anyone? It’s hands-down the best pizza I’ve ever eaten. Pay them a visit. It’s next to Grieghallen where Emperor recorded Anthems to the Welkin at Dusk and In the Nightside Eclipse.

What are you looking forward to most in this year’s edition of the festival?

Easy – just seeing everything come together. The happy faces of the audience, the musicianship, and all our fantastic crew putting their heart and soul into making it the most fantastic festival it can be.

What are your plans for the future of the festival?

Work harder and make it even better.

Feel free to add anything else you wish.

Hope to see as many of you out there as possible. It will be one for the books, I’m fairly confident about that. Thank you all for your support and see you soon.