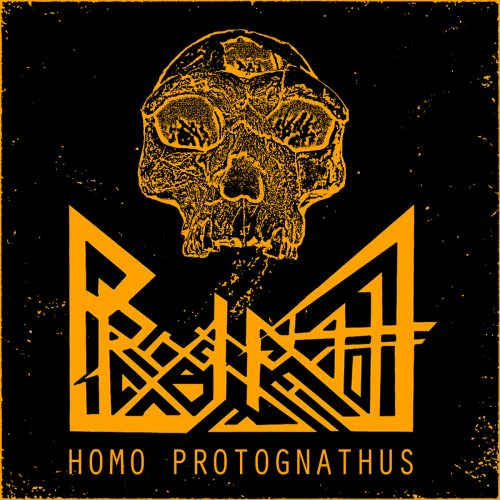 Ask any of my compatriots here at NCS and they’ll all tell you that, generally speaking, Grindcore just isn’t my thing.

Oh sure, you’ll frequently find me at Soundstage during MDF, can of Natty Boh in hand, watching (and enjoying) band after band lurching through song after song of wild, ugly riffs and stuttering blastbeats, but, most of the time anyway, if you were to ask me what makes any of these bands different from one another you’re more likely to receive a long, blank stare than a detailed summary of the history and intricacies of Grindcore as a genre/style.

That’s not to say I actively dislike it, by any means. It’s just that, with a few notable exceptions, it simply doesn’t “click” with me.

And speaking of “notable exceptions”…

The reason that eccentric French extremists Prognathe appeal to me, when so many others fail to do so, is because they’re not really a “pure” Grind band at all.

But whereas their previous releases have, at different times, dabbled in both Sludge and Brutal Death Metal, on their new EP, Homo Protognathus, the duo have gone full-on “Tech-Grind”, and I, for one, couldn’t be happier with this decision.

Of course Prognathe aren’t the first band to plant their flag in the ravaged, radioactive wasteland that sits at the nexus of Tech, Death, and Grind – the moniker could just as easily be applied to bands like Wormed, Cephalic Carnage, and Gridlink (arguably one of the progenitors of the style) – but it still warms my heart to hear the clattering, kitchen-sink-down-a-concrete-stairwell approach of Grindcore melded with the fret-melting, finger-splitting instrumental intensity of Tech Death.

Interestingly, even though both Grindcore and Tech Death are styles that are frequently accused of excessive homogeneity, each of the four tracks on this EP has a slightly different take on what Tech-Grind is, or can be, from the Cattle-Decapitation-on-bath-salts riffgasm that is opener “Transcendental Saliva”, through to the abrasive, angular (albeit surprisingly groovy) assault of hyperactive closer “Crack the Whip”.

In between, the listener’s ears are treated to/tormented by (delete as appropriate) the techtacular riffery and almost unrelenting blastery of the brilliantly titled, and shockingly catchy, “Suture Breed Machine”, and the gruesomely groovy Death-Grind of “And The Living Is Born”, each of which packs an impressive amount of both venom and variety into four-and-a-half and five-and-a-half (respectively) murderous minutes.

What’s really great about this EP is that while it never threatens to outstays its welcome, there’s also so much going on in each track that it’s possible (and advisable) to listen to the whole record multiple times in a row and still find yourself catching new things to be impressed by.

Now, apparently, this EP is the first in a series of short-form releases from the band, each of which is purportedly going to focus on and explore a different aspect of their sound. So while this means that the band’s next effort probably won’t follow exactly the same formula, as long as it retains the same overall quality then I predict it’s going to be a hell of a ride!