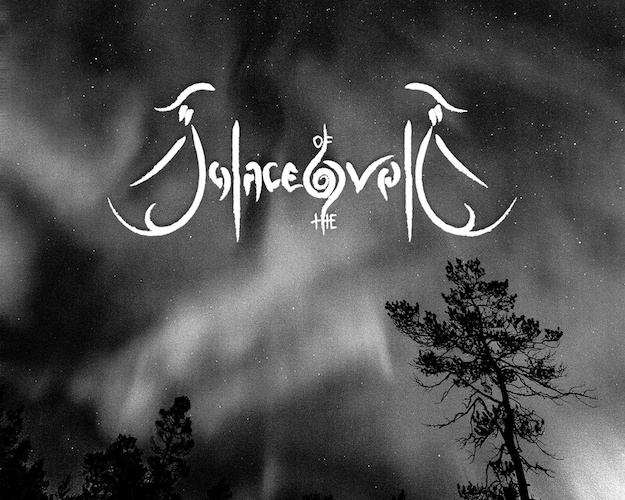 There are places in music, as there are places in the world around us, where we are surrounded by visions that are both glorious and cloaked in air almost too cold to breathe, where the ice shines magnificently like a blanket of crystal across endless, hostile expanses. In the night skies above, in the cascades of an aurora or in the brilliance of compass stars shining in the unimaginable vastness of the void, we might experience a similar feeling of magical wonder and daunting isolation, and there are places like that in music, too.

Canada’s Solace of the Void aren’t the only band who’ve sought to create such sensations in their music, but in the song we’re presenting today (and in their new self-titled album as a whole, which is set for a July 26 release by CDN Records)) they’ve really nailed it beautifully. They’ve located their sound beneath Polaris, creating a fusion of cold atmosphere, symphonic grandeur, blackened ferocity, and mystical folk-influenced melodies to create music that (in the accurate words of their advance press) is “northern, luminous, and majestic” — “rooted in the permafrost of creation”.

Solace of the Void (the album) is unusual in other ways as well. The core duo of Michael Grund (Hexenklad, Battlesoul, SIG:AR:TYR) and John Chalmers (Hexenklad, Pagan Ritual) created the project in 2015, but in recording this debut album they’ve enlisted the collaboration of almost 20 prominent Canadian musicians, whose names we’ll list below:

To return to the song we’re premiering today — “The Fated Prophecy” — the collaborators have created music that’s at once vibrant and heart-swelling, spectacularly grand, and chilling in the wintry, mystical melancholy of its atmosphere. A beautiful ringing guitar harmony begins the song (one of the guitars sounding almost like a theramin), and that leads into heavy chords, pounding drums, and snarling vocals that rise into vicious shrieks. As the vocalist sends his voice heavenward, the drums begin to thunder and the melody gloriously soars.

The song also includes clean vocals, and they arrive at first with a sound that’s both reverent and proud — though the vocals soon returning to slashing shrieks as the song takes flight again over a pummeling double-bass. The music becomes panoramic, continuing to carry the evolving opening melody, enveloping the listener in a shroud of glowing ice (or star shine). A vocalist roars, and, as if the melody couldn’t get more glorious, a soloist creates a flickering, spiraling, fire-bright climax — soon followed by a lilting folk guitar melody and a duet of buoyant singing and harsh growls.

Solace of the Void was recorded at Shiver Sound Studios, and it was mixed and mastered by Greg Dawson at BWC Studios.

SOLACE OF THE VOID:
https://www.facebook.com/SolaceoftheVoid/

TRACK LIST:
1. From Ground To Sky Asunder
2. Before The Throne Of Beauty And Bone
3. The Fated Prophecy
4. Of Stone & Gathering
5. A Diadem Of Twilight
6. The Circle

2 Responses to “AN NCS PREMIERE: SOLACE OF THE VOID — “THE FATED PROPHECY””