The first two selections in Part 2 came my way from Rennie of starkweather. The first of them is a just-released debut album by a Colombian band called GOC, which seems to be an acronym for Gnosis Oscuridad Caos, which is also the title of the new album. It’s difficult to tell what’s coming based on the storm of abrasive and eerie, pulsating electronics in “Schzn”, but what comes is an amalgam of dynamic sounds. The band deliver racing black metal with a bleak atmosphere, coupled with explosive vocals that are as fiery and unhinged as the riffing is often icy and oppressive. The furious yet tortured quality of the vocals is often matched by the instrumental music, when it translates that bleakness into despair and dementia through needling leads and skittering, writhing riffs (laced with dissonance) which build tormented tension and overflow in paroxysms of agony.

Within such songs as “Abstracción Onírica” and the long “Pacto 1” (where the band’s dynamism is most fully displayed), GOC also ease back on the throttle to create haunting, near-hallucinatory moments of brooding and misery, and the reverberant, classically influenced piano instrumental “1011” creates yet another and different translation of pain and desolation. It provides a surprising interlude, but is consistent with the album as a whole in its exposure of emotional ruin, of despondency and desperation. Another grief-stricken piano instrumental, “1101”, closes the album in riveting fashion.

A potent rhythm section is also at work in these songs. There’s plenty of blasting and thundering, but the big booming/clanging bass and hard-hitting drumwork show themselves capable of giving your neck a decent workout too, and the even-ness of the mix allows every instrument to stand out in its contributions.

The trip through the album is a gripping (though a disturbing) one, and the cover art is also great, both on its own and as a reflection of the music, but I’ve not been able to find the name of the artist. 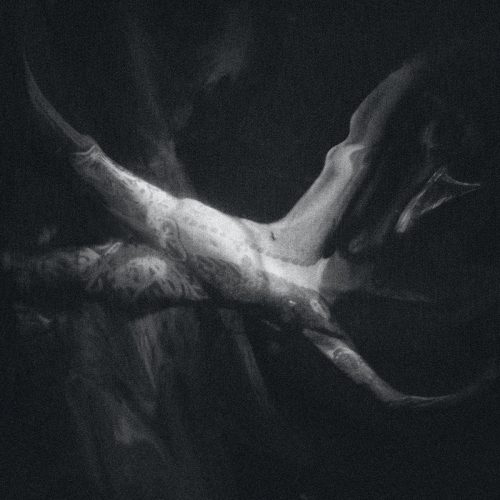 Rennie also recommended this next selection, though in this instance I did have some previous familiarity with the band, having reviewed their extraordinary self-titled debut album in 2018. What you’ll find below is a stream of HWWAUOCH’s second album, Into the Labyrinth of Consciousness, which was released on July 25th.

As the title suggests, the music here does often have an intricate and labyrinthine quality as it twists and turns, winding down mysterious, night-dark pathways and moving ever deeper into a nightmarish realm populated by wraiths and monsters. The vocalist’s horrific shrieks and bestial roars amplify the terrifying qualities of the music, which are themselves manifold.

The guitars have a corrosive level of distortion, yet still ring out in manifestations of alien ecstasy and discordant turmoil, and the murkiness and abrasion of the massed chords doesn’t overshadow the mercurial bass, which plays a prominent (and well-deserved) role. The bassist occasionally shifts into both jazzy and funky rhythms when the surrounding sounds seem single-mindedly geared toward inducing fear, and that’s just one of many juxtapositions in the songs that continue flipping your head upside-down and spinning it around.

Indeed, so much happens within the songs that you can’t really take in everything on a first listen, and that variability and density of texture is part of what makes the album such a completely immersive experience. But although it’s brilliantly inventive to the point of meriting the phrase “avant-garde”, it really is nightmarish from beginning to end (“whacked out and disorienting”, to borrow Rennie’s words). I definitely won’t soon forget it.

HWWAUOCH is part of the Prava Kollektiv (ПРАВА Коллектив) along with Pharmakeia, Arkhtinn, Voidsphere, and Mahr. The members remain anonymous, though they seem to overlap to some extent among the different groups. Of those groups, Mahr just released a pair of EPs (Soulmare I and Soulmare II), and early impressions are positive, but I haven’t had time to make my way through both of them in their entirety. You can check them out yourselves at this location. 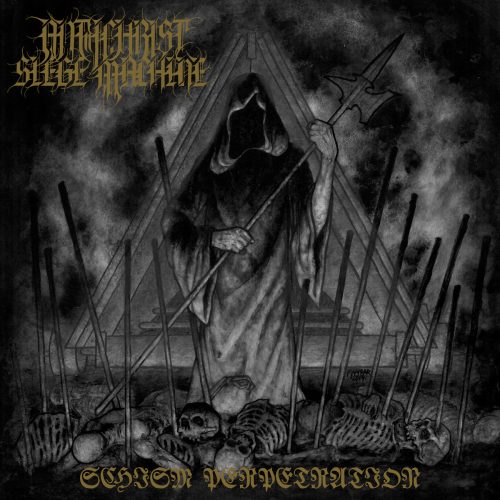 To keep this post going I’ve chosen the two tracks now streaming from Schism Perpetration, the debut album by Antichrist Siege Machine. I came across this band in 2017 through an EP named Morbid Triumph, which I praised at NCS after the EP stream premiered (I ended that write-up by recalling Samuel Johnson’s famous quip that when a man knows he is about to be executed, it concentrates his mind wonderfully.)

The songs below from the new album are “Enduring Power” and “Prime Mover“, and both are absolutely slaughtering expressions of blackened death metal. They exhibit brutish thuggery, pounding with stunning power, and also erupt in frenzies of crazed, ripping riffage and berserker soloing. The vocals are a subterranean roar, a growling that’s heartless but also becomes as deranged as the squirming leads and squealing pick slides. You can feel the drumming in your molars, and although the music is sonic warfare, the band do splice these onslaughts with some head-moving rhythms.

Nasty stuff, to be sure, but it sure does get the heart pumping hard.

Schism Perpetration will be released on August 26th by Krucyator Productions. After that last dose of ugly audio obliteration I thought I’d end this two-part column with a sharp turn in a different direction, taking us to the latest album by UK-based Nyss (who also render their name Þ).

Entitled Ravens II, this is the second part of a two-part series; both records were released by the UK label Miracles from the Gutter, formed by the band’s two main members). Ravens I (which you can find here) was released on July 5th, and I attempted to review it a couple of days later, focusing on each of its three divergent tracks one-by-one. Ravens II came out on July 24th.

I’m going to resist the urge to do the same thing with Ravens II, because I’m running out of time. I’ll say only that the music (which is almost entirely instrumental and heavy on the synths) is a mesmerizing though haunting journey into gleaming celestial realms fraught with peril. As in Ravens I, there are a couple of spoken-word passages laid over the shimmering and groaning ambience, and you’ll also hear angelic voices and the sounds of wretched distorted screams (which might be human and might not). To further keep you on your toes, you’ll encounter doses of head-nodding electronica and bone-splintering percussive rhythms, as well as bursts of ear-wrecking discordance.

It’s a strange trip, as was Ravens I, but I continue to find Nyss‘s creations fascinating.

Nyss began as a one-man project of Þórir Nyss, and then expanded to include vocalist L.C. Bullock; cellist François Boyenval also participated in the recording of Ravens I. However, based on the credits for Ravens II, it seems to be almost entirely the work of Þórir Nyss.