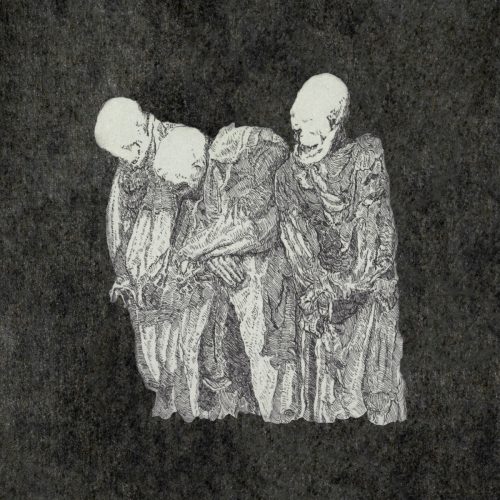 In preparing to introduce the premiere of Mylingar’s new album Döda Själar, I did two things I almost never do. I rarely listen to a band’s previous releases in reviewing a current one, and I never read other reviews of something I’ve chosen to write about. In this case, however, I re-listened to Mylingar’s first two records, and I read some other reviews (after completing my own). I listened again to 2016’s Döda vägar EP and 2018’s Döda drömmar (which was the band’s first full-length), in part because Döda Själar is the completion of a trilogy that began with those two, and putting it in that context seemed important, and in part because I was curious about how this mysterious Swedish band might have changed their music over time.

As for reading other reviews, I was also curious —  about how other people were processing such an annihilating strike. I saw such words and phrases as these: “entering the mouth of madness”; “filthy and nauseating”; “terrifying music for terrified people”; “a record that preys on all that makes humans uncomfortable and tormented”; “routinely twisted”; “heavy and demented chaos”; “some of the most extreme and claustrophobic music released in recent years”; “visceral and unhinged”. Even the advance publicity for the album refers to it as “[a] tempest of whirlwind blackened death metal barbarity and animalistic filth, unrelenting in its intent to rend flesh from bone and inflict torment”.

Resort to such words and phrases is inevitable. You’ll see similar verbiage in what I’ve written. Yet the infliction of different kinds of extreme discomfort, while an unmistakable characteristic of the music, is but one objective of Döda Själar, as I hear it. And the mind-wrecking and bowel-churning qualities of the music (also unmistakable) don’t manage to completely overwhelm the presence of other devilishly devised and insidiously seductive qualities that make the record stand out from the great mass of abusive black/death barbarism.

To provide the briefest bit of context, Döda Själar (as noted above) completes a trilogy, with the titles of each release running from “dead roads” to “dead dreams”, and on to “dead souls” (if Google Translate is to be trusted). There is more in common than there is divergence among the three releases, at least in their dimensions of sound and atmosphere; surely there are lyrical differences, but I don’t have any of the texts. There might be more blood-curdling horror and nightmarish hallucination in the sensations of the first album (reviewed here) compared to the earlier EP (reviewed here), and maybe a slightly greater prominence to the rock-crushing bass tones. And overall, comparing the two, there’s a creeping sense of dread that the band had developed more practiced (but not more polished) forms of audio torture by the time of the album, drawing their communion with demons into a closer circle, and through that embrace finding more sure-handed ways to inflict and prolong the agony.

To amplify that last point, as I wrote of the album near its release, “Even at their most barbaric, the tracks aren’t simply spasms of chaos. Thought and careful planning went into these insidious creations, even if the thinking and blueprints have the mark of deviancy on them.” But that feeling of witnessing a more sure-handed application of  learned torture techniques is only a general sense, because the music on Döda drömmar is so dense and so often chaotic end emotionally ruinous that it’s difficult to dismantle that massive engine of dismaying destruction and lay out all the component parts for inspection, much as it would have been difficult to do the same with the EP.

Which brings us to Döda Själar. If you were as dumbstruck by the first two releases and as prostrate before them as I was, you will fall before this new album, too. If Mylingar needed any further accomplishment to solidify their exalted position in the most horrible realms of black/death, or to create a sound and style that’s unmistakably their own, this record will do that (though I hasten to add that nothing further was really needed to achieve those objectives).

Like its predecessors, the new record shocks the conscience, shakes the body like a rag doll, and broils the mind like a raw steak that’s first been tenderized by aggressive pounding and then seasoned with a spice called Derangement. In those respects, and others, it’s closer to the two predecessors than it is a divergence from them, certainly close kin even if it’s not the kinship of a simultaneous birth. What that means is that if you’re familiar with the previous two releases, you might as well go ahead and press Play, and revel in the madness, or run for the hills in fear and disgust, depending on your reactions to the terrifying brilliance of those previous monstrosities. Still, I do think there are some distinctions worth noting, and further warnings or inducements for new listeners (whether it’s one or the other will depend on your tastes, not your intelligence).

Where does the close kinship lie? To take the resemblances in no particular order, it lies in the vocals. Seasoned listeners of the most extreme forms of black and death metal have been exposed to all manner of distorted atrocities expelled from human throats, but whatever half-man, half-beast is making these sounds, which have been further twisted into grotesque shapes through the ministrations of modern electronics, has achieved levels of horrendous power and lunacy that would be deemed exceptionally macabre even in our mutilated listening circles.

The kinship further lies in the completely thunderous quality of the maniacal drumming and spine-shivering bass. The deep booming and warping undercurrents and bone-fracturing assaults of the rhythm section never let you settle in place for very long, and they give the music an incredibly powerful and threatening aura. Yet they also continue to lock into rhythms that will be familiar to addicts of death metal, while also blasting with breathtaking speed and ferocity.

The kinship also lies in the caustic and corrosive abrasiveness of the guitar tone in the riffs, in the otherworldly reverberations of the leads, and in the layering of all these ingredients in a way that creates a hurricane of sound, with all manner of uprooted structures, fractured objects, and various bleeding lifeforms flying past at tremendous speed. You feel the need to duck, but will be impaled anyway. And, as before, Mylinger periodically put your fragile skull under a pile-driver and then pound it into bloody goo and splintered bone.

But as mentioned earlier, there are distinctions. Some of those become apparent in the opening track, “Obalansen”, which in one fell swoop might be the most ferociously insane track Mylingar have yet recorded, and also one of the most eerie and diseased. That dynamic isn’t new to Mylingar — they have already excelled at hybridizing the sensations of their music, juxtaposing explosions of stunning violence with episodes of supernatural emergence and catastrophic doom — but they have found ways to push many of these extremes even further in that opening attack.

But, truthfully, much could be said of other tracks on the album, which are also often stunningly fast, and filled with braying and groaning melodies and demented, discordant chords, with the sickening sheen of hellish majesty and the remorseless cruelty of a slaughterhouse. The experience is even more overpowering, more terrifying than what has come before — not by an order of magnitude, mind you, but the intensity does seem to have been dialed up, which didn’t seem possible. And Mylingar seem also to have reached even more elevated heights of horrifying majesty. That sense of being in the presence of epic, titanic, utterly lethal eminences of inhuman origin has never been more palpable or potent.

There also seem to be some nauseating electronics in the mix, or perhaps the bassist is caressing his instrument in a particularly perverse way, but it adds to the hallucinatory aura of the music, as do the sheets of wailing and boiling sounds, which might be guitar effects and might be the capturing of radiation from a supernova.

It’s difficult to capture in words the combination of catastrophic destructiveness, seriously queasy disorientation, and nightmarish un-reality that Mylingar have concocted here. It’s also difficult to pick out every last thing they’ve done to achieve these effects. You get fleeting glimpses of many things, but as in the case of their previous releases, the music is just too dense and ruinous to permit careful dissection. And even if you could, why would you want to? If you really knew how this was done, maybe that would sap some of the electrifying excitement and fear that the album channels like a flood of water from a firehose.

Enough with the words. On to the music. Love it or hate it, I’ll venture to say that you will find nothing more obliterating of body, mind, or soul this year, or in most other years, and yet so powerfully and primally compulsive.

Döda Själar will be released on CD and LP by 20 Buck Spin and by Amor Fati in Europe. A cassette tape edition will be released by Vigor Deconstruct. My understanding is that there will be no pre-orders for the physical editions of this album. So put August 2nd on your digital calendar, or circle the date in blood if you still prefer good old paper. Digital pre-orders may be placed through Mylingar’s Bandcamp page. All the links are below.

9 Responses to “AN NCS ALBUM PREMIERE (AND A REVIEW): MYLINGAR — “DÖDA SJÄLAR””