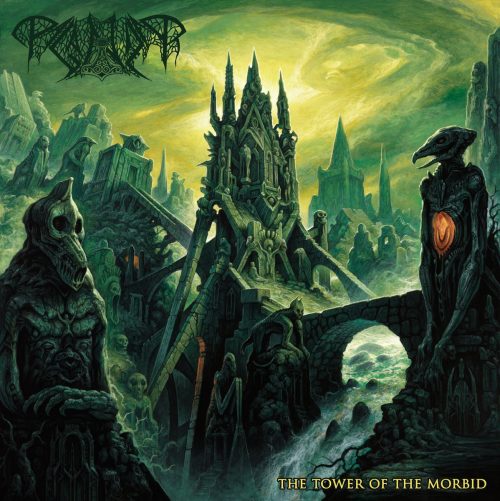 I decided to begin with this new Paganizer track for three reasons. First, because I needed to see Dan Seagrave‘s fantastic artwork for the new album at the top of our page until tomorrow. Second, because I have a crippling weakness for the music of Rogga Johansson, and Paganizer is the oldest and longest-running of the numerous groups to which he has devoted his talents over the last quarter-century. And third, because the track is a killer. 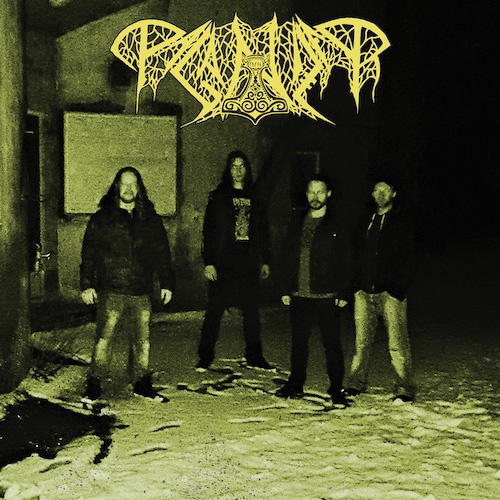 The Tower of the Morbid is the name of the new album. The explosive new song is “Apocalypse Writings“, and it does sound apocalyptic. The riffing is blazing fast, heavy as hell in its tone, and utterly ferocious. The monster vocals are no less ferocious. The drumwork is razor-sharp and neck-breaking in every rhythm. When the song shifts gears for a solo, it becomes even more stupendously head-bangable. Once again, Paganizer has left me weak in the knees.

The Tower of the Morbid will be released on November 1st by Transcending Obscurity Records.

On July 22nd Benediction and Dave Ingram announced that Ingram would be returning as Benediction’s vocalist after an absence of 20 years, and I got so fucking excited after seeing the news that I knew I’d have to find some way to blare it across our page.

Ingram wasn’t Benediction’s first vocalist (Barney Greenway was the frontman on the band’s 1990 debut album), but he was behind the mic for 1991’s The Grand Leveller and three more albums (as well as numerous shorter releases), culminating in 1998’s Grind Bastard. After that, Dave Hunt (Annal Nathrakh) took over, and did great work (it was him at the front of the stage for the one and only Benediction live performance I was lucky enough to see at Maryland Deathfest). He announced his departure earlier this year.

It will be great to hear Dave Ingram performing with Benediction again, and great to hear new Benediction songs — the band are entering the studio next month to begin recording a new album. Watch this space for further news: 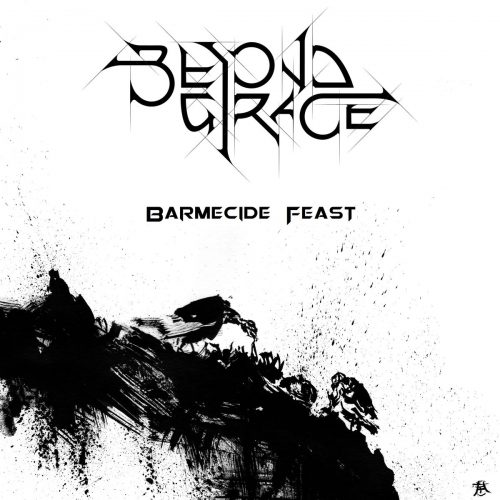 The occasion for this latest effort to help spread the word about Beyond Grace is the band’s release of a lyric video for a single named “Barmecide Feast“, which will appear on their forthcoming second album,  Our Kingdom Undone (produced by Charles Elliott of Abysmal Dawn). I’ve already written about the song (which includes guest vocals by Matt Moss of Slugdge), since it was released as an audio stream via a premiere at Pure Grain Audio several weeks ago. Rather than repeat myself, this time I’m just going to focus on the lyrics.

I know Andy to be a very well-read guy and an excellent writer, and I also know how much effort he puts into writing lyrics, and that shows here. (In fact, the thought has just occurred to me that I should take over Andy’s Waxing Lyrical series for the purpose of putting the questions to him.) The socially conscious words (which concern the growing divide between rich and poor and and the ways in which people are conditioned to play along with that as if it were normal) are powerful, and they’re written in a way that the rhythms in their delivery works very well with the music (which certainly isn’t always the case for metal lyrics, where vocalists often have to speed up or awkwardly slow down their delivery to make the cadence of the words fit with the music).

It will come as no surprise, once you’ve seen the words, that Beyond Grace is donating all proceeds from sales of the single to The Trussell Trust, who work to end hunger and food poverty in the UK.

P.S. If you don’t know what “barmecide” means (and I didn’t), you should definitely look it up. 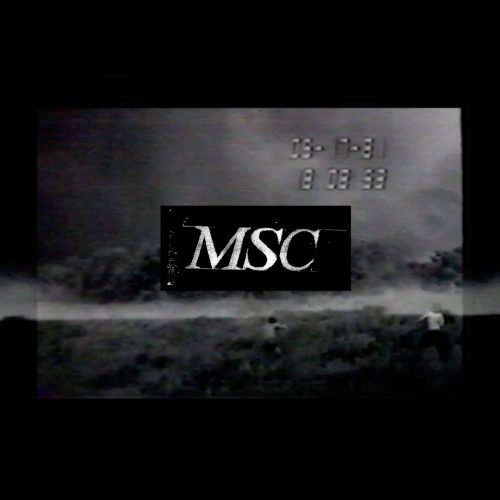 Here’s how I came across this next album, which proved to be an enormously pleasant surprise, even though it’s quite a curveball in the context of the other music in this post and in most other posts at this site.

The path to discovery began with a YouTube clip for a song named “Stories” by the North Carolina band Giant, which a Facebook friend had posted. I don’t think I had never heard of Giant, and definitely hadn’t heard this song, but it bowled me over. I thought it was fantastic. It appeared on the band’s only album, 2006’s Song. Metal-Archives calls the music “Experimental Doom Metal”. And when I consulted Metal-Archives to learn more about the band, I discovered they had changed their name to Braveyoung in 2009, and shifted their sound to post-rock.

The album doesn’t sound much like either Giant or Braveyoung, but I love it. Through guest performances, the music includes violin, viola, cello, trumpet, French horn, and tuba, processed in different ways. It also includes spacey synths (or what sound like synths), various percussive implements and electronics, a piano (the piano is the principal instrument in the second track), , and sparse vocals of different kinds. I’m not sure what label to put on the music — maybe experimental? — in part because all the tracks are different — often beautiful (the trumpet solo at the end of the fifth track is incredibly moving), sometimes harrowing, sometimes majestically grand, but always fascinating.

If you’re in the mood for something different from your usual fare, give this your time. I’m entranced by it.

Below you’ll find a stream of the album, and the song by Giant that set me on the path to this discovery. 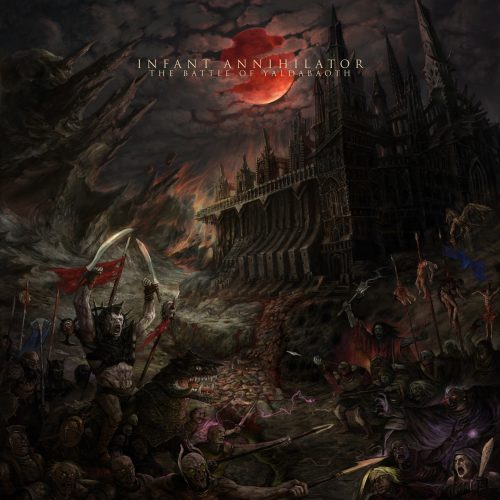 Now for a blast from the past.

Back in 2012, between myself and TheMadIsraeli, we wrote posts about a new band named Infant Annihilator no fewer than six times, leading up to the release of their debut album, The Palpable Leprosy Of Pollution. I found their music insane, and their videos insanely hilarious (though you needed a juvenile sense of humor to appreciate them, which of course I had in spades).

As TheMadIsraeli wrote in his review of that album, it was a rare deathcore release in a genre that had become “a cesspool of inept musicians who are more consumed by the laughable bro-centric culture the style has produced than anything”. He continued: “Not many bands are able to put out an explosive cask of pure badassery this concise, this jarring, and this fury-born”. In the words of The Font of All Human Knowledge: “They are known for their technical, eclectic, parodistic, and brutal musical style; satirically graphic lyrical content and shock humour; and music videos that feature ribald themes”.

Well, that was 6 1/2 years ago, and since then I completely lost track of them. Originally, the band consisted of two Brits — drummer Aaron Kitcher and guitarist Eddie Pickard — with vocals sent across the internet by American growler Dan Watson. After seeing the new video that’s the next item in today’s round-up, I discovered that, with new vocalist Dickie Allen (also an American) on board, they released a second album in 2016, and that the third one — The Battle of Yaldabaoth — is scheduled for a September 11 release this year. It includes guest appearances by Trevor Strnad, Alex Teyen, Alex Terrible, and Storm Strope, and great cover art by Guang Yang.

So, with that background, here’s the new video (made by by Joey Aitchison) for “Three Bastards” off the new album. The music is still insane. The video is a shitload of fun to watch, in part because the lunatic fun that the band are having is so contagious. I mean, I know that die-hard old school metalheads will probably turn this off, but I enjoyed the hell out of it — so here it is: 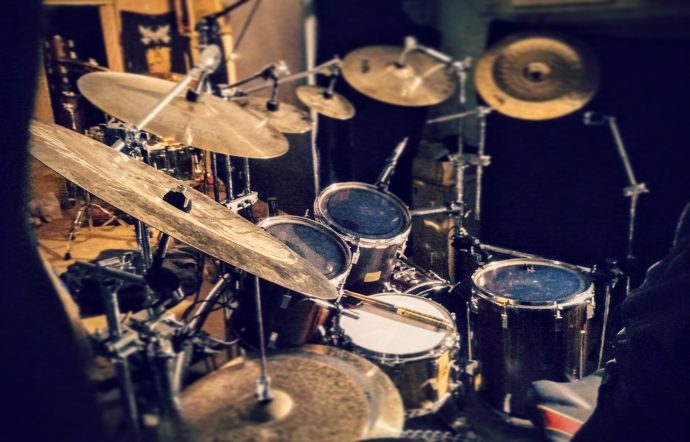 To conclude, I have a video of a drum performance by Robin Stone, whose resume includes current or former membership in such bands as Convulsing, Virulent Depravity, Norse, Somnium Nox, Paroxsihzem, and The Amenta. The performance features “switch blasts” (I didn’t know what the term meant but figured it out while watching) and “china grabs” (same).

And with that, Im signing off. As always, enjoy the rest of your fucking day.