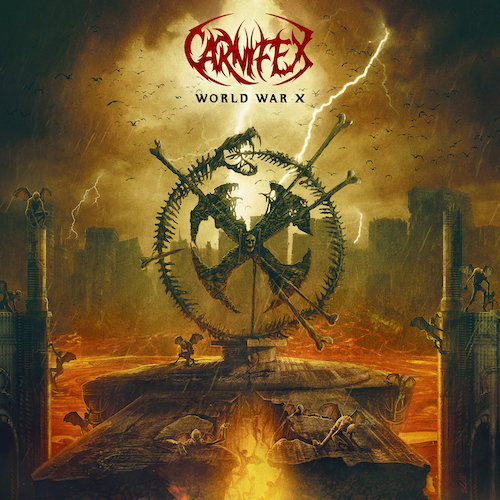 (This is Andy Synn‘s review of the new seventh studio album by Carnifex, which will be released by Nuclear Blast on August 2nd.)

As a wise (albeit fictional) man once said, “with great power, comes great responsibility.”

And, as one of the biggest and most famous bands in all of Deathcore, it could be argued that Carnifex have a real responsibility to act as leaders and shepherds for the genre which they once helped pioneer.

The question, of course, is… do they want to? 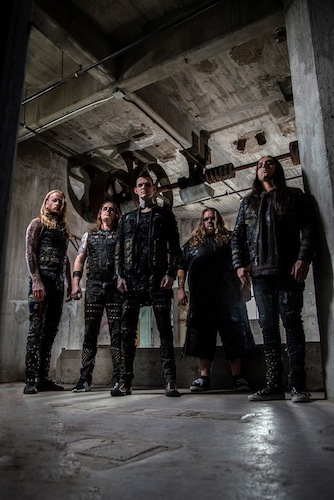 Make no mistake about it, the band’s influence on the scene is huge, and their relative prominence and infamy – signed to Nuclear Blast and currently out co-headlining this year’s edition of the Summer Slaughter tour – means that it’s not just bands from the Deathcore scene who’ve been inspired by the group’s particular blend of blackened fury and brutish chuggery.

But I’d argue that, at the moment at least, any bands following in the Californian quintet’s footsteps will ultimately find themselves presented with the same difficult dilemma which now afflicts their heroes.

What do I mean by this? It’s simple really.

When Carnifex fully embrace their blackened side – as they do on the tremendous opening title track – this album practically explodes out of the speakers with a sense of shameless bombast and big-budget brutality that would put even the latest heavyweight Hollywood blockbuster to shame, with the band throwing volley after volley of scything tremolo, moody synths, and massive riffs at the listener in an ever more OTT display of extremity and excess, to the point where it’s no surprise that certain sections of the internet have taken to playfully referring to them as “Deathcore Dimmu” (just take a listen to “This Infernal Darkness” or “No Light Will Save Us” for further proof/evidence).

But when the band lean into their ‘core roots the difference in quality is instantly noticeable, and the generically djenty riffs and dime-a-dozen breakdowns scattered throughout tracks like “All Roads Lead to Hell” and “Hail Hellfire” serve to completely derail and arrest the band’s forward momentum, as if someone had suddenly spliced in sections from an awkwardly shot and half-finished student film into what should be a major movie event.

It also doesn’t help that although the utterly savage and scorching vocals of Scott Lewis remain one of the band’s most potent weapons, there are definitely times on this record when the lyrics (fun though they are) and delivery settle for repeating the same patterns and hooks he’s utilised to great effect on previous records… something which, as a long-term fan, became more and more noticeable to me with every listen.

Yet that’s not to say that World War X is an album without merit. Far from it. In fact some of these songs (including several of those mentioned above) probably rank amongst the best and heaviest tracks which the band have ever put to tape – “Eyes of the Executioner” in particular is an absolute monster – and it’s clear that, barring a few missteps here and there, the group’s instrumental talents and songwriting skills are only getting better with time.

In the end though, WWX finds the Californian crushers still in a similar position to the one they’ve been in ever since their 2013/2014 rebirth, caught between two worlds, and seemingly unsure which they want to commit to.

Change, of course, is always difficult, and even a little scary, but it seems to me that if Carnifex are ever going to fully realise their true potential they’re going to have to learn to let go of the past.

Until then though, there’s more than even blasting belligerence and outsized aggression here to keep them (and the rest of us) going!