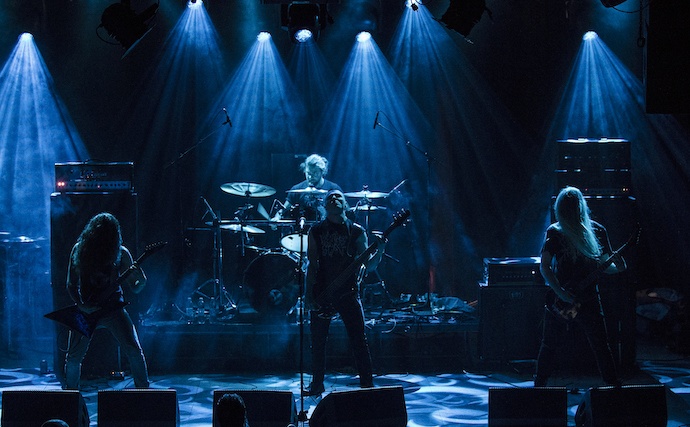 (In this July edition of THE SYNN REPORT, Andy Synn focuses on the albums released to date by the Finnish band Krypts, including a review of their most recent album, Cadaver Circulation, released this past May by Dark Descent Records.)

Fearsome Finnish four-piece Krypts are one of the best bands in Death Metal right now.

As a matter of fact, in my humble opinion, their punishing blend of humongous, heaving riffs, putrid vocal vomit, and dread-inducing Doom is absolutely second to none, and looks to have achieved its ultimate apotheosis on the group’s latest, and greatest, album, Cadaver Circulation, a record which can honestly go toe-to-toe, round-for-round, with the very best of them.

That’s not to downplay the intensity or impact of their previous two releases though, as the band have always been consummate wielders of “the riff”, and have, likewise, always possessed a certain gift for songcraft which ensures that even their foulest metallic offerings are as virulently infectious as they are absolutely crushing. 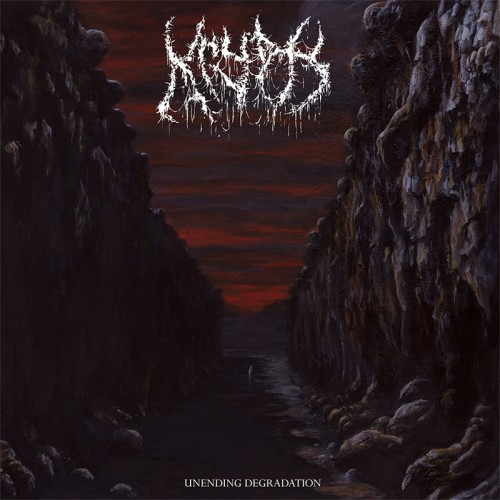 As the most “straightforward” of the band’s releases (“straightforward” being a relative term, obviously), Unending Degradation leans more towards the “pure” Death Metal side of things than the increasingly desolate and doomy style which they’d go on to adopt soon after, but even here there are already signs of the morbid monstrosity that the band would become.

The album’s scene-setting intro, “Perpetual Beyond”, clearly and unashamedly acknowledges the influence of very early Amorphis, before quickly transitioning into the brutal, bone-grinding riffs and neck-wrenching blastbeats of “Blessed Entwinement”, whose occasional moments of gruesome groove serve as but the briefest (albeit welcome) respite from the pure Finnish fury on offer.

Both “Open the Crypt” and “Dormancy of the Ancients” employ a touch of demonic Doom influence (something which would become far more prominent on the band’s next record), with the former lacing its lurching riffs and bowel-shaking bass-lines with a trace of eerie, evil melody, while the latter plays grisly games with blazing speed and suffocating slowness, twisting and inverting itself through sequences of tortured tremolo and crushing chords that never seem to rest or relent.

The pseudo-two-part “Inhale…” and “The Black Smoke” work together to show off both sides of the band’s burgeoning repertoire of brutality, with the former going full-on Doom while the latter delivers a deluge of deathly grit and grimness (with that early Amorphis feel rearing its ugly head once again), before barreling straight into the bombastic bombardment of abhorrent aggression and revolting riffs that is “Day of Reckoning”.

Climaxing in suitably dark and devastating fashion with “Beneath the Archaic”, six minutes and forty-five seconds of gut-churning, neck-wrecking, kerb-stomping Death/Doom that serves as a skull-encrusted signpost towards the band’s future, Unending Degradation is the sort of debut that most bands want, but very few actually achieve, the sort of debut that not only tells you, in no uncertain terms, “we are here”, but also challenges you to prepare yourself for what comes next!

It’s obvious from the first creeping notes of “Arrow of Entropy” that Remnants of Expansion is going to be an even darker, and significantly more doomy, album than its predecessor.

The song’s drawn-out, utterly desolate intro instantly and unflinchingly sets the tone for things to come, slithering its way into your eardrums like drop after drop of the foulest poison before finally transforming into a roiling cauldron of writhing tremolo riffage, pounding percussion, and ghastly, sub-human gutturals, all twisted into a seemingly endless series of harrowing hooks and sinister shapes over the course of the track’s titanic, ten-minutes-and-fifty-seconds, run time.

Speaking of titanic… “The Withering Titan” is as massive and malevolent as only the very best Death/Doom bands can be – latter-day Incantation immediately springs to mind when the Finnish foursome burst into a flurry of scorching blastbeats and screaming riffage part-way through – while also being catchier and hookier than the majority of the group’s peers, both old and new.

The title-track is just under four minutes of crawling dissonance and haunting melody that serves as a moment of instrumental calm and introspective clarity before the flesh-rending, soul-destroying mix of blasting extremity and brooding atmosphere that is “Entrailed to the Breaking Wheel” bursts its way out of the speakers with all guns blazing, after which the doom-laden denouement of “Transfixed” not only ratchets up both the atmosphere and heaviness even further but also introduces a much more blackened element into the band’s already brackish brew.

Not an album for the faint of heart, but still one of the most impressive (not to mention oppressive) albums on the more atmospheric and doomy end of the Death Metal spectrum, Remnants of Expansion may not be the band’s magnum opus (not anymore, anyway) but that’s only because their next release happens to be even better! 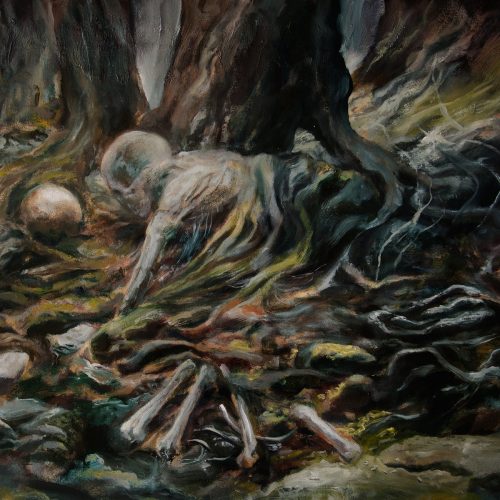 Not only is the band’s third album their best yet, it’s also one of the best Death Metal albums of the year, striking a near-perfect balance between the deathly grimness of their first record and the more gruesomely doomy sound of their second, while also building upon the hints of blackened grimness and psychedelic madness which had occasionally popped up on previous songs.

Sonically-speaking, everything about Cadaver Circulation is bigger, nastier, and uglier, than ever, swamping the listener in a thick and fetid stew of meaty, malevolent riffs and dense, suffocating bass tones, all underpinned by some seriously punchy percussion (courtesy of drummer Otso Ukkonen) and topped off with Antti Kotiranta’s signature vocal corrosion.

Take opener “Sinking Transient Waters”, for example. Equal parts frantic, neck-snapping riffage, crushing, claustrophobic chords, and skin-crawling atmosphere, it’s a savage summation of everything the band stands for as well as a potent statement of intent. Not only that, but for a song that practically reeks of death, it’s also one of the most viscerally vibrant, paradoxically alive, tracks the band have ever recorded, to the point where you can almost feel its flesh rippling and writhing beneath your fingers.

And, speaking of reeking… the stench of Incantation is all over “The Reek of Loss”, whose doom-laden chords and dissonant pseudo-melodies practically pulsate with simmering savagery and deathly decay, while the aura of pure menace which surrounds the chugging, churning guitars of “Echoes Emanate Forms” helps make it one of the harrowing, yet also somehow hookiest, numbers the band have ever concocted.

Despite its relatively short length, “Mycelium” packs in more fire and fury into three minutes and forty-six seconds than many bands manage over a whole album, building from a brooding, booming, doom-heavy intro to the sort of bruising, blast-driven crescendo that would put current Death Metal darlings Tomb Mold to shame, following which the asphyxiating atmospherics and gargantuan guitars of “Vanishing” sees the Finnish filthmongers going almost full-on Funeral Doom in places.

Krypts arguably save the very best for last, however, as “Circling the Between” introduces a lethal dose of bleak, blackened dissonance into the band’s loathsome blend of massive riffs and macabre ambience, sounding at times like a three-way dance of punishment and putrefaction between Immolation, Abyssal, and Hooded Menace, all of which builds towards a truly mesmerising finale that seems designed solely to leave the listener ravenously hungry for more.

If this one doesn’t make a major impact on several End of Year lists… I’ll eat my hat. Or your face. One of the two.