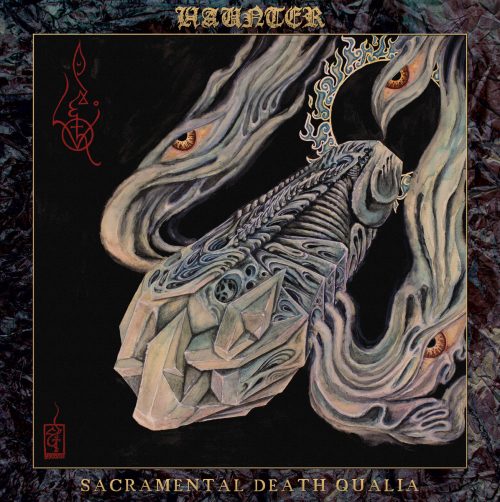 I might have bitten off more than I can chew in the concluding installment of this column, which began here yesterday: After opening with one advance track, I’ve included complete streams of four album-length or EP-length releases. There’s also a risk that I’m serving up a platter of blackened metal that’s too heavily laden for most of you to consume. I’ll have to hope that you at least sample everything. You might find one or more prized additions to your music collection.

As I organized the selections in this second segment of this week’s column, it seemed fitting to begin and end it with the talents of Elijah Tamu. Here at the beginning you see an example of his striking visual art, in the cover of Sacramental Death Qualia, the new album by Texas-based Haunter. At the end, his musical talents will be on display. 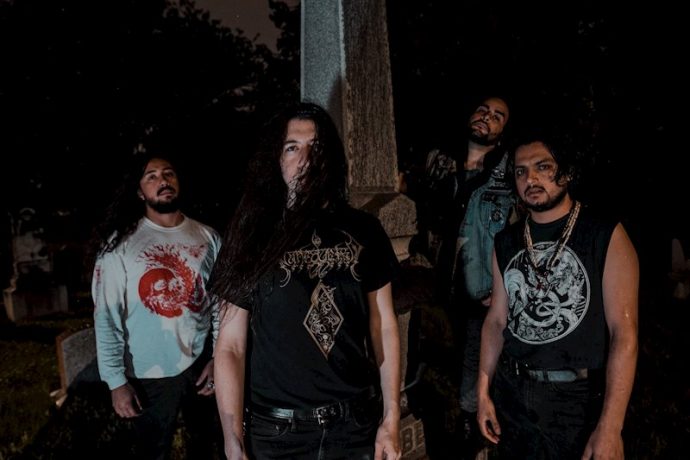 We expected the release of Sacramental Death Qualia earlier than September 13th, which is the current release date, but I, Voidhanger Records delayed it so that it will now soon be followed by an extensive U.S. tour; you’ll find the dates below, after the song stream. The song you can hear is “Dispossessed Phrenic Antiquity“, which premiered at Invisible Oranges last week.

After the strength of Haunter‘s 2016 debut album (Thrinodia) and splits with Crawl, Sovereign, and Black Vice, hopes have been high for this follow-up, but it’s apparent even in this advance track (and even more apparent across the album as a whole) that those hopes will be exceeded. Haunter‘s compositions have become even more creatively elaborate, more technically demanding, and more adventurous.

This particular song is indeed riotously adventurous, combining jarring angularity and mind-warping fluidity; discordance and dementia; cavernous roaring, incendiary shrieking, and demonic, crocodilian growls; sharp tempo changes and exotic, ringing guitar interludes that are bewitching. It has the capacity to shove the listener off-balance, to send shivers down the spine, and to cast spells in the most unexpected ways, yet everything somehow integrates beautifully. Thoughts of Gorguts, Krallice, and Blood Incantation come to mind….

Sacramental Death Qualia was mastered by Brendan Sloan (Convulsing). I, Voidhanger will release the album on LP and CD, and digitally, with cassettes coming our way via Tartarus Records. You’ll see the current schedule of Haunter‘s tour dates in support of the record after the stream of “Dispossessed Phrenic Antiquity“. 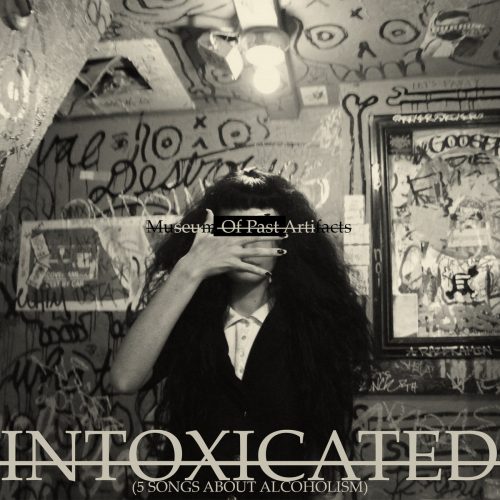 MUSEUM OF PAST ARTIFACTS

Now we move into the first of the four full-length releases, beginning with the debut EP of Museum of Past Artifacts, a one-man band from La Paz, Bolivia. The EP’s title is Intoxicated, and it consists of five songs about alcoholism.

You’ll figure out very quickly, in the opening moments of the title track, that Mörk Darthanas (Daniel Sanchez Flores) has musical interests that extend beyond depressive black metal, though that’s a specific genre term he uses to describe the music, and indeed beyond black metal altogether. The reverberent guitar melody, the shining keyboard tones, and the propulsive beats in the opener bring to mind ’80s-influenced post-punk and futuristic synthwave. I had glimmers of Drab Majesty processed through a black metal prism. Of course, the sounds of tortured shrieking and violent regurgitation, and of abrasive guitar and galloping drumwork, set it apart from those other influences.

Consistent with the thematic focus, the remaining songs are dark and harrowing, but filled with beguiling melodic hooks and irresistibly body-moving rhythms, too (and even more extensive variation in the harsh vocals). I have become intoxicated by Intoxicated, every song an ingeniously faceted gem.

Intoxicated was released on July 28th by the Italian label Visionaire Records.

Consider a concept album about the end of human civilization, inspired by Russell Hoban‘s 1980 science fiction novel Riddley Walker and sci-fi novel A Canticle For Leibowitz by Walter M. Miller, Jr. (both of which are post-apocalyptic gems). Consider that it includes a song named after British author J.G. Ballard‘s dystopian sci-fi short story “The Voices of Time“, which features spoken words taken from the story. Consider further that it includes a cover of a magnificent Townes Van Zandt song (“Rake“, which also appeared on the band’s 2014 EP named for that song). Would you be interested in listening to such an album?

I certainly was, although I was pretty eager to begin with since I was a fan of this New England band’s 2013 debut album, Casualty of the Psychic Wars, and said so here. Six years after that one, Grue released their second album, final transmission from tomb​-​world Earth, on July 5th.

I was completely captivated with what Grue have done with “Rake“, transforming it into a more intensely tortured and desperate kindred of the original, but also including a truly heart-breaking interlude that moves seamlessly from a mystical reverie to a crushing dirge. As much songwriting prowess and emotional intensity went into that cover as you would hope for in an original song, and so it’s not surprising that the original songs are also excellent.

They are also harrowing in their intensity. The opener, “and the Earth became drunk with our Blood“, begins the album in shattering fashion, and also displays Grue‘s gift for insinuating strands of moving melody into songs of tremendous explosive force and emotional power. But the funereal organ melody at the beginning of the second song, “degenerate Remnants of a Sorcerous race“, makes even more clear that Grue‘s songcraft is wonderfully dynamic and multi-faceted. The ways in which they create variations on that opening melody, and push and pull the energy so effectively, make it a stand-out track.

But every track could stand strong alone, even extracted from the context of the album. Every one of them juxtaposes passages of excruciating emotional trauma, delivered in truly electrifying (and often bombastic) fashion, with soft and slow movements of mesmerizing, melancholy beauty. The vocals are as raw and painful as gaping wounds, amplifying the agony captured in the most high-voltage surges of power, and the instrumental variations are persistently transfixing, all the way up through the heart-aching violin instrumentals within the devastating album closer.

In a word, this is brilliant — a riveting musical journey that powerfully captures the narrative of humanity’s self-inflicted downfall. 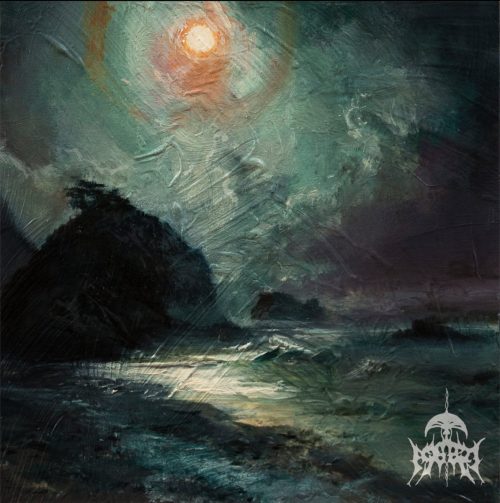 The opportunity to include the artwork of both Elijah Tamu and Adam Burke in the same post is an opportunity not to be missed. It is Adam Burke‘s wonderful creation that adorns the cover of the next album in today’s collection, a debut full-length named Chapel Perilous by North Carolina’s Arghast. I discovered it thanks to an enthusiastic Facebook post by fellow North Carolinians Mo’ynoq, whose own accomplishments we’ve lauded more than once at this site (most recently in Andy Synn‘s review of their own 2019 debut album).

Chapel Perilous provides a very good complement to the Grue album that precedes it in today’s collection. It delivers music of scorching emotional intensity, in this case driven by eye-popping drum- and bass-work as well as searing riffs and striking vocal intensity (a mix of shattering screams and horrid roars), but also reveals a gift for moving melody and extravagant, progressive instrumental variations on the main themes. There’s also brilliant guitar soloing to be found throughout Chapel Perilous, capping exceptional instrumental performances at every station.

The mood of the music is often desperate and despairing, but even in its most wrenching episodes it’s capable of soaring to glorious heights that swell the heart near to bursting (and the band are generous in doling out head-moving riffs, too). Reprieves from the desolating effect of the music’s assault on the senses are few and far between (though it definitely becomes spectacularly exuberant as well as entrancing at times). Even when the band aren’t hurtling ahead at full-steam, an air of tension or hopelessness shrouds the music. But the possible sacrifice of your emotional well-being is a small price to pay for an album as wondrous as this. 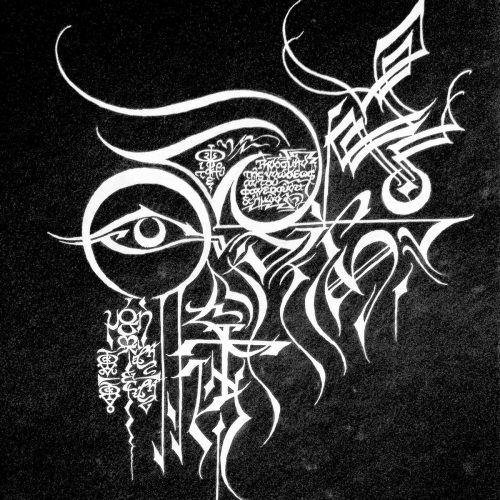 We began with Elijah Tamu‘s visual art and now conclude with his musical art. He is of course already known for his musical artistry under the name Panegyrist, but this concluding selection is a different project, one that he has named Orison Wrethe. This debut release, From Hallowed Cloaks of Night (released on August 3rd) includes three unmastered demo tracks recorded at his home from 2015-2016.

As he has explained, they “grew out of a particular vision of pursuing the mystical and essentially religious heart of black metal by disassembling the familiar elements and reforming them in ways that are often not even categorizable as metal”. What he ended up with “was a combination of lo-fi black metal, dark ambient, and choral music, along with some orchestral, neofolk, and post-industrial stylings here and there”. In further introducing this release he wrote: “Atmosphere is everything here. Much of this music revolves around long builds before unexpected turns. The tracks require some patience, but I hope that at least some of you find the journey to be rewarding”.

If you go to Orison Wrethe‘s Facebook page you’ll find even more detailed notes about each of the three tracks. They do indeed incorporate a rich array of musical ingredients, and they do indeed build gradually, though Elijah is being humble when he says the tracks require patience. Instead, they each enfolded me in their haunting embrace from the first moments.

What sounds like the slow bowing of a violin or cello, set against a backdrop of spectral and angelic ambient tones, draws us into “Through Pall and Sight“, creating a mood that’s both mournful and perilous. The soft guitar picking and bursts of hand-percussion that follow, still accompanied at times by those celestial choirs, deepen the music’s intrigue, as well as its mystical atmosphere. Complete silence falls, making you think you’ve reached the end, but this meditative piece is 20 minutes long, and the spellcasting resumes after that mid-point silence, as the lament of the bowed instrument (or what sounds like one) and the light patter of the hand drum returns.

It is a long build, but what the song is building toward turns out to be magnificent — a combination of more frantic bowing tones, majestic orchestration, and glorious choral voices — before a final spell of bereavement that seems to open the heavens.

The comparatively shorter “Night Orision” (which is only 10 minutes long), again makes use of choral voices and symphonic orchestration at the outset, but there is a feeling of growing tension and peril in the music, a sense of encroaching darkness and incipient madness. The tension builds to near-excruciating levels, eventually torqued to the breaking point by scorching shrieks, harrowing yells, boiling guitar, and a transformation of the choral and orchestral components into end-of-the-world delirium. When the tension breaks near the end, there is still no peace or solace. We seem instead to enter a spirit world of lost souls.

The shortest of the three tracks, “And the Spirits of the Prophets Are Subject to the Prophets“, is an improvisational piece consisting of a single guitar track, morphed through a sequence of effects, with backing vocals of changing dimensions (including throat-singing). It has a dreamlike or hallucinogenic quality, a spell of a different kind from what has come before, yet still with the feeling of an excursion into celestial realms.