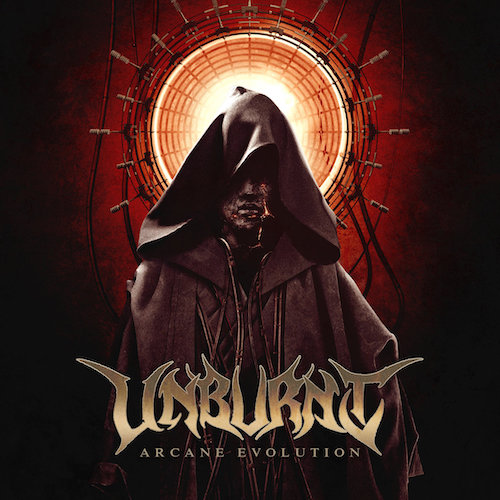 Among the long list of adjectives that leap to mind in listening to Unburnt’s debut EP (and you’ll see many of those in the following paragraphs), the one that probably belongs at the top is “ferocious”. While the music is undeniably multi-faceted, the trip through the four tracks on Arcane Evolution is a turbo-charged rush. It propels us at high speed through a savage gauntlet of blackened death metal that’s attacking on all fronts, in breathtaking fashion. The fact that the band manage to integrate so many other experiences along the way, without ever lessening the wild savagery of the assault, is at least as impressive as their talent for obliteration.

The line-up of Unburnt combines the talents of Canadian performers from other established groups — guitarist Bo Louther (Odium), vocalist Eric Burnet (Samskaras, ex-Derelict), drummer Joe Mullen (Odium), and bassist John-Ryan Godfrey (We Are Human). They chose to form Unburnt as a vehicle for creating a different kind of metal than what any of them had been doing in their other bands, and on Arcane Evolution they’ve succeeded in splicing together an array of divergent stylistic elements in a way that’s coherent — and electrifying. 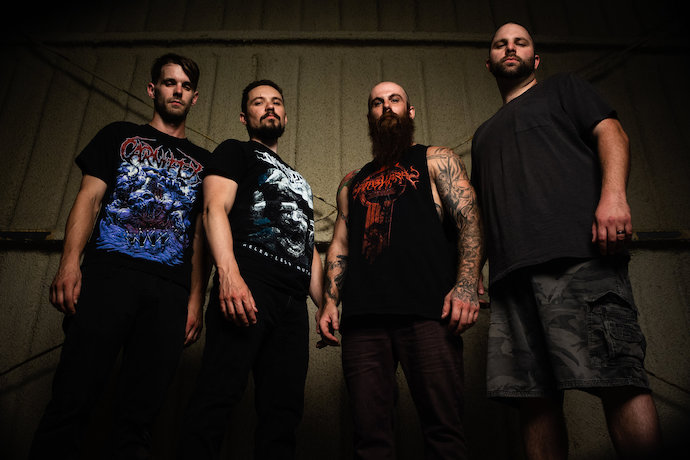 But hell yes, the through-line of the music is ferocity. That comes through loud and clear in Eric Burnet‘s vocals — in his enraged roars, his strangled shrieks, and his crazed screams. It all sounds frighteningly deranged, with the only diversion coming in the vocal harmony that makes one surprise appearance in the closing title track, which straddles a line between singing and snarling.

No less ferocious is Joe Mullen‘s explosive drum performance, and the riveting teamwork created by his interplay with Godfrey’s bass lines and Louther’s morphing riffs and equally variable leads. Yet, as forecast earlier, the collaboration of these instrumental performers creates a multi-faceted dynamism, which becomes immediately evident in the barrage of “A Reason to Live“, which opens the EP in startling fashion. Brutally battering drums and seething tremolo’d riffing gives way to massive jolting chords coupled with a dismal, pestilential melody, laced with dissonance but with a slow, sweeping quality as well. A galloping riff arrives later, paired with rapid, pulsating tones.

The tech-death antecedents of some of the band members are evident, but the music isn’t slavishly beholden to that genre. As a result, “Superiority In Wisdom” includes queasy, buzzing riffs along with rapid-fire drum strafing, and jackhammering grooves as well skittering guitar mania. Start-stop bursts of bullet-spitting frenzy share time with a crazed, darting and slithering solo and skull-cracking snare strikes, while Burnet’s vocal extremism continues to send shivers down the spine.

The band’s proclivity is to attack without warning at the launch of each song, and “Sorrow-Bearing Enemy” bolts from the gate with another fusillade of rapid-fire drum blasting and jittery, jarring fretwork. There are fanfares of crazed melody mixed with those horrid roars and choking shrieks, as well a darting, swirling solo with a desolate feel. Unburnt’s groovesome inclinations are also given free rein in a sequence of rapid, pile-driving rhythms, but they also deliver a bleak yet soaring melody that cascades over the remorseless drum punishment.

Unburnt has shared this comment about the themes of Arcane Evolution:

“This EP combines themes of knowledge, technological change, and spirituality. It asks how these things intertwine and evolve through human society, as well as ponders what kind of future we’re headed towards at this rapid pace. The music itself goes to the heart of what we set out to create with Unburnt: punishing rhythms, melodic textures, and brutal vocals. If you enjoy death and black metal, this is sure to be up your alley.”

Arcane Evolution will be released digitally on August 16th, and it’s available for pre-order now: