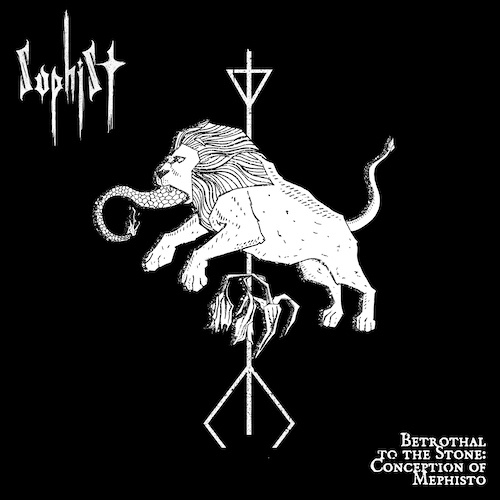 Edmonton-based musicians Davis Hay and Michael Sparks joined forces only a few months ago under the name Sophist with the aim of creating a hybrid of black metal and grind, drawing inspiration from the disparate antecedents of such bands as Napalm Death and Rotten Sound as well as Mayhem, Gorgoroth, Darkthrone, and Anaal Nathrakh. The first fruits of their collaboration is an EP called Betrothal To The Stone: Conception of Mephisto, with lyrical themes drawn from a text called “Hermaphrodite Child of the Sun and Moon”. The EP will be released on August 16th, but we have a full stream for you today.

The EP consists of three complete songs, as well as instrumental-only versions of those same three tracks. As presented in the YouTube stream below, the songs tend to flow from one to the next, creating a sense of being hurled further and further into a hellish occult realm where the listeners senses are under constant assault. 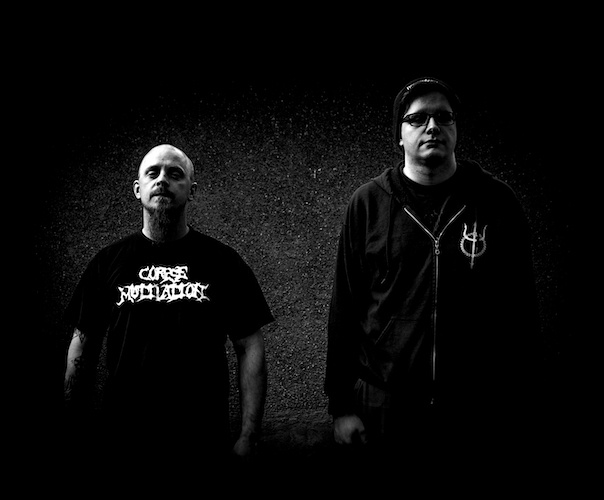 The song-writing process for these three pieces of mayhem is a bit unusual. As the band describe it, Hay defines the song structure and programs the drums, and Sparks then layers in the bass and guitar, after which Hay adds synths and vocals.

They’ve produced the music in a way that creates a dense, murky sound and a chilling atmosphere, but not so dense as to obscure the sulphurous riffs, the fast-changing drum rhythms, or the ear-lacerating impact of the vocals.

Launched by hammering percussionn and thick, roiling riffage that’s cold and cruel at first, the title track also introduces listeners to the deep undertones of the bass, which sound like rolling thunder, and to Hay’s vicious, scorching screams, his tirades sometimes layered for extra skin-shivering impact. The riffing changes, rising in delirium and falling into a dismal, pestilential sound; the drums erupt in blazing blast-fests; and feverish, freakish leads add to the music’s feeling of mayhem.

A more syncopated drum beat creates a contrast at the outset of “Choke On Your Own Bile”, and then switches to rapid-fire bursts (and later slows as the song becomes a lurching stomp). The riffs are still a roiling, fuzz-encrusted mass, but their sound creates a sorcerous and psychoactive atmosphere, while the screams, reverberating howls, and choking snarls becoming ice-picks to the ear-drums. The tempos and drum patterns are in constant flux, and at times the crazed guitar emanations switch to blaring, head-moving chords, meshing with the galloping bass pulse to create a head-moving momentum. The song also features a squalling guitar solo that’s both serpentine and scintillating. Powered by earth-moving bass lines and lunatic guitar work, the song reaches a crescendo of chaos.

But as the EP moves immediately into “A Captive of Saturn’s Scythe”, the sound becomes even more chaotic — a raging storm of thunderous drumming, bubbling bass, and maniacal guitar which swamps the senses in its unhinged fury. Sophist do throw in some booming, head-hooking cadences, and the buzzing chords flicker and fall. But there are also fusillades of blasting, and the vocals become a cacophony of murderous madness. The song explodes in a destructive frenzy before abruptly converting into a tension-filled bit of ambient noise at the end.

Betrothal To the Stone… is a rough and raw piece of work, a necrotic, alchemical creation that does indeed sound like it was spawned in Hell, and although Hay admits to “a few production mistakes and some things we will do a little differently for the next record”, Sophist pronounce themselves pleased with this first effort. And yes, they are already writing new music.

This debut EP will be available on all streaming platforms on August 16th, and it’s also available for pre-order on CD through Sophist’s Bandcamp page. The cover art was created by Unexpected Specter.