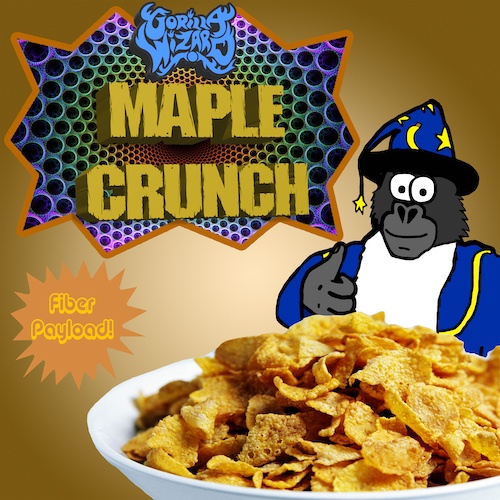 The outward trappings of the sludge/stoner band Gorilla Wizard from Long Island, New York, almost dare you not to take them seriously, perhaps most especially the white-bearded, wizard-capped gorilla costume in which guitarist Bertrum (the Gorilla Wizard himself) performs while his bandmates Mikal (Bang Boom), Ry (Slap Bap), and Gabrel (Howl) kick up a ruckus around him. And no doubt, they’re having a shitload of fun with those outward trappings, and with the music itself. But don’t be misled: Although the music definitely is a raucous kick in the head, it’s far from silly. The songcraft is excellent, the performances are razor-sharp, and when you hear the band’s debut album, Tales from the Cauldron, you’ll understand why this fearsome foursome chose a name like Gorilla Wizard.

Two songs from the record have surfaced so far, and today we’re bring you a third one in advance of the album’s August 23 release date. The name of this new one is “Maple Crunch“. It will crunch your bones and wreck your neck, and it proves to be as addictive as a sugar high. 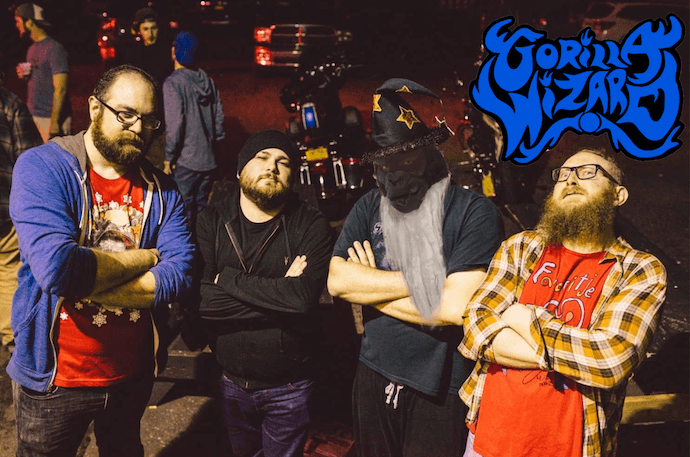 The song is a gut-rumbling, hard-charging gallop, with a ton of low-end heft in the bass and cranium-cracking force in the hard-hitting drumwork. Ferocious snarls, fierce yells, and cauterizing screams accompany the pulsing chords and battering percussion, and the galloping momentum is segmented by giant, skull-caving grooves. When the band dramatically drop the pace into a slow, doom-laden stomp, the vocals become eerie wails, and this boisterous brawl suddenly feels like a chilling spell. But have no fear, the track ends in a clobbering, jolting burst of mayhem.

“Maple Crunch” provides a good clue for why the band chose the name they did — it pounds and mauls like an enraged gorilla, and it’s pretty magical, too.

Gorilla Wizard was originally formed as a side project by drummer Mike Castillo (Favoritje) and “1400 year old Gorilla Wizard, Bertrum“, but grew into a full band when Ryan Markoe joined in on bass and Gabriel Saladino (Kaiju Daisenso) became the vocalist.

Tales From The Cauldron will be available on all major streaming platforms on August 23rd, and you can pre-order the album on CD, cassette, and digitally through the links below.

You can also check out those two previously released songs from the album — “Closet Monster Shuffle” and “Smashosaurus” — via Gorilla Wizard‘s Bandcamp stream, which we’ve also included below. Both songs provide further evidence of Gorilla Wizard‘s body-moving song-writing chops, as well as their ability to bust your head open and slug you black and blue. Those songs reveal even more vocal variety than the song we’re premiering today, with gritty, wailing clean vocals and monster growls in the mix. “Smashosaurus” is especially obliterating, and might be the most turbocharged and explosive of the three tracks made available so far.