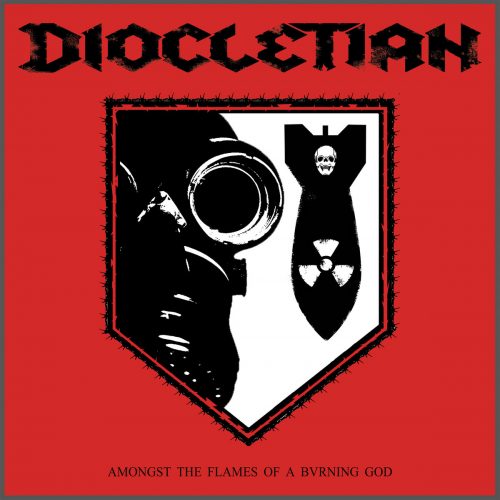 In 2015, after the release of the uber-powerful Gesundrian, Diocletian split up, but the dissolution wasn’t permanent. Guitarist Atrociter re-formed this New Zealand war-metal strike-force with a new line-up that also includes Rigel Walshe (Dawn of Azazel) at bass and vocals, guitarist M.H. (ex-Heresiarch), E. M. at drums, and Impurath from Black Witchery as lead vocalist. That group has recorded a “comeback” Diocletian album entitled Amongst The Flames Of A Burning God that was released two days ago by Profound Lore. 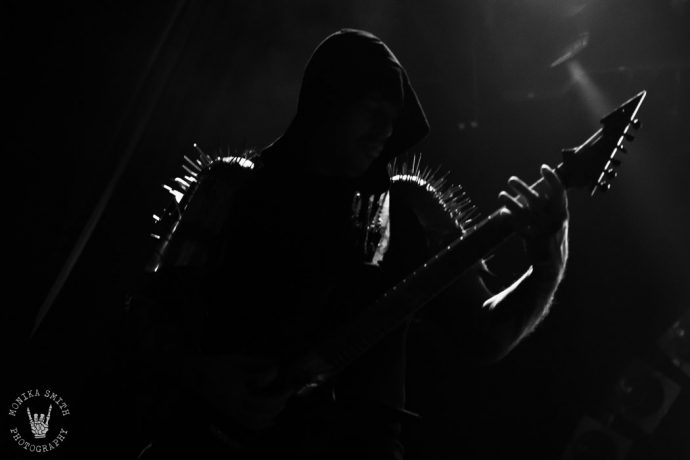 Accurately billed as a regression back toward the impressions and atmosphere presented on the band’s Doom Cult debut, Amongst the Flames… is red meat for the faithful. Lean and very mean, the eight tracks rumble and ravage with extravagant viciousness, each of them wasting no time getting to the point (which is mayhem) and not taking much time to finish the slaughtering either.  Impurath‘s livid shrieks and caustic howls are maniacal, and a good match for the rhythm section’s hair-raising tumultuousness, the roiling and slashing cruelty of the riffs, and the shrieking derangement of the solos.

The songs hit like racing storm-fronts, creating walls of abrasive, distorted sound, but the presence of thundering grooves, blaring chords, eye-popping drum fills, and slithering melodic hooks keep the music from becoming an undifferentiated mass of violence. However, to be clear, with only a few exceptions (such as the skull-stomping bit of misery that lurks within “Berserker Rites”) Amongst the Flames… really IS violent, the sonic manifestation of a war-zone melee that delivers a big kick to the adrenal glands. 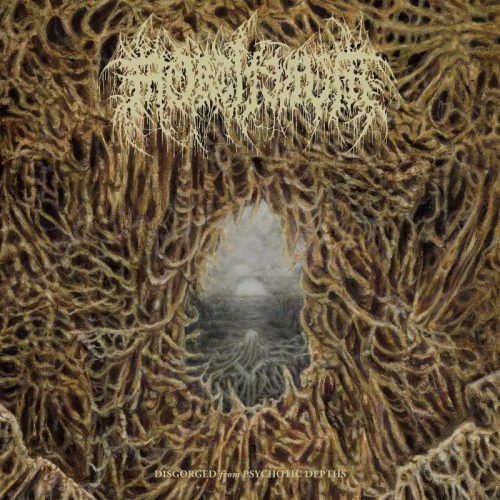 Washington State’s Mortiferum have made quite a name for themselves in short order, through their 2017 demo Altar of Decay and many crushing live performances (one of which I witnessed at the 2018 edition of NCS-sponsored Northwest Terror Fest). It was no great surprise, then, that Profound Lore signed them for the release of their debut album, Disgorged From Psychotic Depths, which will happen on October 11th.

The first “single” from the album, “Archaic Vision Of Despair“, starts crushing and gouging at your guts right away. Down-tuned and distorted to brutally destructive levels, the stringed instruments strike like methodical hammer blows on an anvil and moan like the despair of desolated souls lost in the ether. The flat crack of the china cymbal and the methodical punishment of the drums eventually give way to more accelerated surges, matched by the more heated seething of the guitar, which emulates through sound a disease vector spreading like wildfire.

Ghastly sepulchral roars and a wriggling and wailing solo complete this audio tapestry of towering dread and ruinous derangement, of disease and decay, of remorseless destruction and stygian blackness.

Pre-orders aren’t up yet, but in the meantime check out Altar of Decay at Mortiferum’s Bandcamp, and look for more info in the coming days at the other locations linked below. 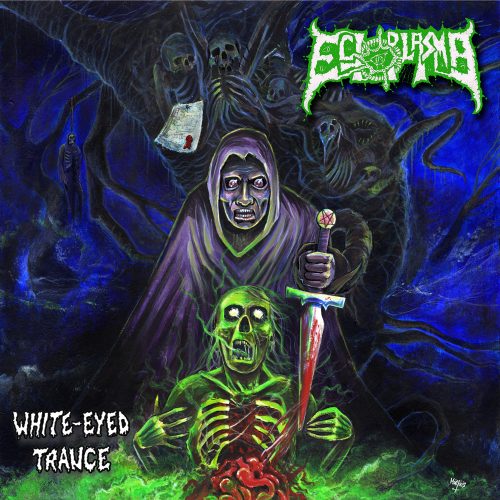 I’m encountering the Greek band Ectoplasma for the first time, despite the existence of two previous albums and a handful of shorter releases in their discography, which extends back to 2014. Their third album, White-Eyed Trance, is the source of the next song in this collection, “Psychomanteum Immolation“.

It’s difficult for a band to stand out when they’re as steadfastly devoted to early ’90s death metal, from both sides of the Atlantic, as Ectoplasma are. Such devotion is evident in the works of hundreds if not thousands of current bands, most of whom will leave no mark after they’re gone. Having said that, the success of the super-group Gruesome in recycling the vibe of Death’s early albums (to pick one example) shows there is still a strong taste among fans for old-school worship when it’s done well, regardless of how saturated the field might be. And based on this first track from White-Eyed Trance, Ectoplasma do it very well indeed.

Armed with impressive technical skill, the band throw themselves into a high-speed assault that doesn’t take long to get the listener’s pulse jumping, and they marry slower horror-prone movements with eye-popping flurries in which the drum rhythms and riffs are in constant flux. The slowest of the interludes, near the end, creates a truly ghastly atmosphere before a final eruption of mayhem — and a last chance to bang your head with vigorous determination.

White-Eyed Trance will be released on October 31st by Memento Mori (CD) and Caligari Records (cassette tape), and vinyl will be forthcoming through Repulsive Echo Records. I haven’t seen any pre-order links yet, but I assume they’ll be publicized when ready through this page:

In 2016 we devoted an extravagant amount of attention to Experiment of Existence, the phenomenal second album by the Chilean death/thrash band Ripper, including both a song premiere and a review and stream premiere of the full album, plus selection of an album track to our list of that year’s Most Infectious Extreme Metal Songs. It’s thus exciting news around here that Ripper will be releasing a new five-track EP on September 30 through Unspeakable Axe (who also released Experiment of Existence).

“The Unreal” is the second of those five tracks. It left my jaw hanging open, even though the PR material had already tried to prepare the way by explaining that Ripper had “leaned a little further into their progressive influences, with a more pronounced presence of Atheist riding shotgun with their usual Teutonic and South American thrash forerunners”. The reference to Atheist is completely justified in the case of “The Unreal“,  which is both a wild, jittery, technical tour de force and a skull-cracking stomp.

The band do inject this unpredictable (end even bewildering) romp with bursts of electrifying thrash (along with those bone-fracturing grooves), perhaps to keep the listener’s brain from exploding in the face of so many riotously kaleidoscopic maneuvers. Amazingly, it all hangs together, but you’ll still need a great many more listens to really appreciate what each performer is doing (and they all shine, including the vocalist, who sounds like a wild beast fully enraged).