That photo up there, it’s a classic example of the calm before the storm — the members of Geist holding still for the camera. Even in that frozen moment, you get the sense of barely repressed menace, a perception of people who are much more comfortable exploding on stage than waiting while the timer ticks toward the detonation.

And man, these dudes from the northeast of England really are explosive. Through a feral mix of dark hardcore, crust, and metal, they channel emotionally raw and devastating sensations (and bone-busting force) through their debut album Swarming Season. And the video we’re premiering today for an album track named “Sleep Deprived” captures them in their true element, throwing themselves with utter commitment into the performance of the music (rather than waiting for the shutter to click). 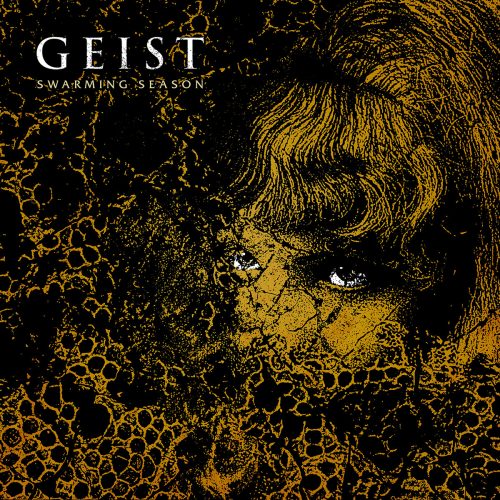 This isn’t the first time we’ve written about “Sleep Deprived“. It caught our ears (and mauled them) when it first debuted a few weeks ago, prompting these reactions here:

“Sleep Deprived“, is, as expected, ferocious. The massive riffs, rock-crushing bass lines, and obliterating drumwork are punishing, but also electrifying, while the vocals are completely unhinged. When the pace slows, the song becomes a bleak, black-eyed, bruiser that gives no hint of hope for a better tomorrow”.

The video is a great match for the music. Fast-cutting close-ups of the performers reveal how completely they throw themselves into the music, working in harness together like a demolition machine but each of them seemingly lost in the wrenching, electrifying catharsis of the sound — which is as it should be.

Swarming Season will be released by Cursed Monk Records on September 20th, in a 6-panel CD digipak edition and digitally. The cover art is wonderful, and credit for it goes to André Trindade. The album was produced by Joe Clayton and was mastered by Will Killingsworth at Dead Air Studios. It also includes guest vocals by Chris Colohan (Sect, Cursed, Burning Love). The album is available for pre-order now: