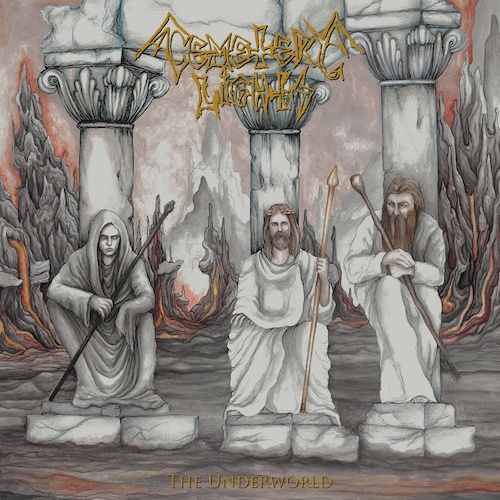 The debut album of Cemetery Lights is a bewildering experience, and a magical one. The sound is earthy, in fact so organic in its tones and so stripped-down in its elements that it brings to mind garage-band rock recordings from many decades past. At the same time it sounds unearthly, so sinister, mysterious, and exotically arcane that it fogs the mind and chills the skin — and conjures visions of otherworldy splendor. Those weirdly perilous and wondrous aspects of the music are in keeping with its conceptual inspirations, which are rooted in the Homerian epics of ancient Greece, in Hesiod’s Works and Days, and in several other complementary texts

This album, The Underworld, is the solo work of The Corpse, a Rhode Island-based musician who began his endeavors under the name Cemetery Lights with a pair of 2018 EPs, Lemuralia and The Church on the Island, which themselves drew inspiration from the history and mythologies of the ancient Mediterranean region — and also sounded like a throw-back to an earlier age of black metal from the same region. Written between 2009 and 2014, the eight songs on the album were recorded at the same time as those EPs, but unlike them include live percussion. 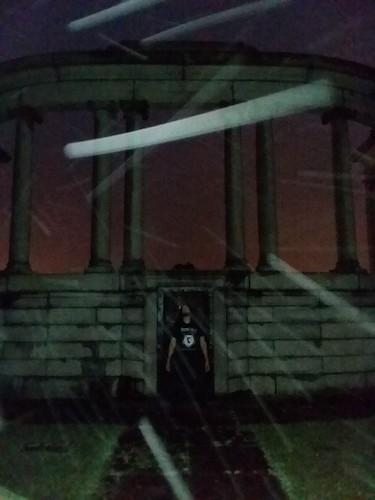 The natural sound of those live drums is matched by the tone of every other instrument — nothing fancy, nothing manipulated, nothing over-produced to achieve an antiseptic sheen nor degraded to cast the music into the murk. There’s a bit of dirtiness in the guitars, but they come closer to a clean tone than to the abrading distortion of most black metal, and the bubbling effervescence of the bass brings to mind a fretless instrument. Nevertheless, as noted above, although the music itself may sound un-polished and “home-produced”, it also sounds un-real at the same time. And the cruel, serrated savagery of the vocals gives it a hostile and harrowing edge.

The thematic subjects of the songs are apparent from their titles, and the music was composed as companions to those mythic lyrical themes. Altogether, the songs may leave your head spinning, and no two of them sound quite alike, though they’re unmistakably the manifestations of a singular vision.

“Erebos” introduces the album in a rumbling, lurching, bounding romp, and quickly becomes fascinating through the combination of those bubbling bass notes, the wriggling, demented riffing, and the eerie gleam of the song’s chiming melody. The song also transitions into a thunderous bass-drum tumult and boiling chords, which becomes a sign of how variable all the rest of the songs are as well.

From the gloomy mid-paced movements, piston-driven accelerations, and other sinister swings of “Hades”, which includes a bleak but also fiery solo over a head-nodding rocking beat, the album moves into the galloping, bacchanalian wildness, the brazen grandeur, and the occult wyrd-ness of “Elysium” and its mysterious and mystical leads, which seem to swirl like psychoactive vapors.

By contrast, “Isles of the Blessed” opens with a slow, moody, and subtly menacing instrumental before jumping forward into a cantering pace and then a pounding gallop, accented by flickering notes and other crazed guitar reverberations over serrated-edge proclamations. There’s a melancholy and reverent soulfulness to the solo that surfaces in the stately movements that break up what becomes a head-long race, and by further contrast that’s followed by “Shores of Akheron”, an almost playful bass-guitar instrumental, which seems both meditative and a bit lunatic.

Cemetery Light‘s musical conception of “Olympos” is not entirely foreseeable. On the one hand, it is indeed a tapestry of glorious, gleaming, exotic melodies and epic heavy metal riffing, which befit the song’s subject. On the other hand, there is a sense of brooding gloom in the song as it changes. It channels mystery, magnificence, and the sense in the closing minutes of drawing us into the presence of a forbidding occult ritual.

The closing songs on the album continue with Cemetery Light‘s creation of contrasts. “Tartaros” surges with galloping drums and dervish–like frenzy in the riffing, with dismal undertones in the grim, ringing notes and strange burbling bass pulsations backed by rampant drum mania, and it becomes a cavalcade of macabre, clanging and twisting guitar extravagance. But “Fields of Asphodel” concludes the album with a sequence of slow, seductive, yet threatening bass notes and a slow drum tempo. In a setting that’s disquieting and morose, a high, reverberating guitar lead seems to wail in anguish over solemn spoken words. Even when the drum rhythm segues to a more animated rhythm (before disappearing altogether, yielding the field to a cycling bass motif at the end), the music casts a dark and dolorous spell.

We present a stream of all the songs on this unusual album below. The Underworld will be released by Nuclear War Now! Productions on LP and CD on September 7th, with a cassette tape edition becoming available on August 31st. For info about how to acquire the record, keep an eye on these locations: