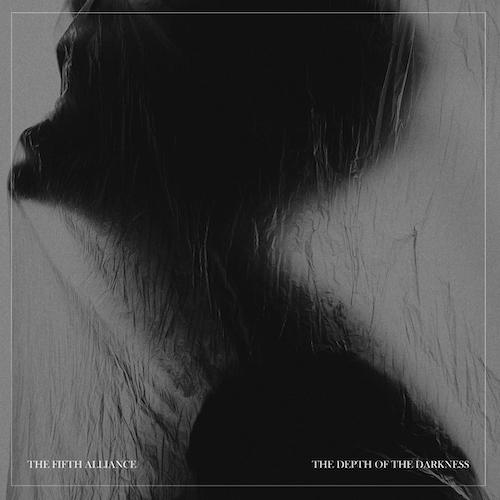 In mid-July the Dutch genre-benders in The Fifth Alliance released a single named “Black”, the opening track on their new album The Depth of the Darkness. It made a stunning first impression on this writer (only a first impression, because I hadn’t encountered the band’s previous two albums, Unrevealed Secrets of Ruin (2013) and Death Poems (2015)).

“Black” amalgamates gigantic, heaving, low-end tones and bone-cracking drum beats; glinting guitar notes and wailing clean vocals; haunting atmospheres of shivering moodiness and building tension; and a thundering eruption of blackened ferocity that takes the seeds of pain in the music and makes them flower in thorns. In that eruption, the guitars buzz and boil in a grim torrent of sound as the rhythm section leaves wreckage in their wake, and the vocals vent scarring torment. After that storm of sound the music becomes spectral and chilling (the vocals even more insane), but seductive as well as disturbing. Those ringing notes you hear at the end don’t go away even after the silence falls.

Of course it is true, as most parents teach their obstinate children, that first impressions matter a lot. But what you do afterward can either undermine a brilliant opening gambit or prove instead that it was no fluke. So the question here becomes, did The Fifth Alliance build on “Black” across the remaining four substantial tracks on The Depth of the Darkness or deflate the lofty expectations created by that first single? You’re about to find out. 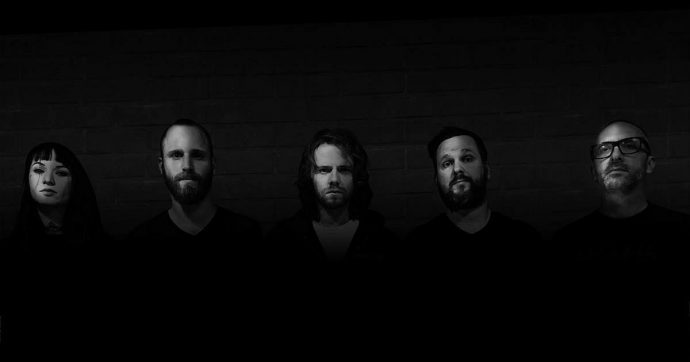 If you visit the band’s Metal-Archives page you’ll see signs of the administrators wrestling with a genre description, leaving “Sludge/Post-Metal/Post-Hardcore” as their best effort. If you check the tags on The Fifth Alliance Bandcamp page you’ll also see references to black metal and doom. If you stitch those additional references into the M-A descriptor with more hyphens and slashes, the result still wouldn’t completely sum up the music. It might instead leave the impression of a disorderly musical jumble, but that would definitely be the wrong impression, first or otherwise.

And to return to the question posed above, what we expect you’ll conclude after listening to our premiere stream of the album as a whole (as I have) is that “Black” is no outlier, but instead an accurate sign of how utterly gripping the rest of the album is, and how masterfully the band have integrated a multitude of stylistic influences into their night-dark musical visions.

The dismal, oppressive melody that opens “Hekate“, paired with sky-high singing, invokes doom in a way that becomes increasingly sorcerous, but the band transition seamlessly into more intensely wrenching expressions, with a piercing tremolo’d riff and caustic shrieks combining with thunderous low-end currents to quicken the pulse and push the mood into one of helpless agony. Yet while terrible bleakness floods from the music in racing torrents, the otherworldly aspects of the radiating melodies remain spellbinding, and the spell deepens when the race relents to allow ghostly guitars to gleam and shiver above the interplay of craggy bass and irresistibly head-moving drums.

The band’s post-metal dispositions come through in “Hekate”, along with the inclinations toward doom and black metal, and they remain a persistent presence in the following tracks. The sludgy potency of the bass and the bruising impact of the drums are also ever-present. They make a big impact in “Hellfire Club“, as do the near-crystalline shine of the guitar melodies ringing above grim, raking riffs and the scorching pain and fury of the vocals. The song is also capable of setting your whole body in motion as its intensity builds, even as the band take a sledgehammer and knives to any sense of well-being you might still have had before being granted guest admission to this hellfire club. The pile-driving groove that ends the song especially risks leaving your neck in ruins.

While the band continue to create dynamic experiences through “Into Extinction” and “Aleister“, the through-line of those experiences is a continuing descent into despair, with perhaps some glimpses of celestial wonder near the end. In the former song, the guitars ring out in a way that channels yearning and fervent hopes, and churn in the anguish of learning that they were all false. The drums erupt in frenzied fusillades, the vocalist howls like a mortally wounded animal, but the music ultimately seems to collapse into a sinkhole of doom and degradation. The whirring guitars move from deliriums of pain into the moaning of abandonment and grief.

The fight in the music comes back immediately in “Aleister” through gales of blazing guitar and tumultuous drumwork. The pulse of the bass is as vibrant as it is gut-punching, but the guitars cascade down into a dark intersection of fever and foreboding before ringing again like chimes over a martial snare patter and then swirling like a mystifying musical borealis above a powerhouse propulsive drive. It would be wrong to call the brazen energy of the song “up-lifting”, yet it’s beautiful as well as soul-searing and body-mangling.

So, with a resounding yes we answer the main question: The strength of “Black” as a first step forward is matched by the long strides that follow it across The Depth of the Darkness, proving that The Fifth Alliance are formidably talented, capable of interweaving rampant ferocity and crushing heaviness, visions of astral beauty and the bleakness of a cancer ward, physically compulsive rhythms and hypnotizing spells, and never loosening their grip on the listener’s attention at any moment during these 40 minutes of ranging sounds. We hope you’ll become just as immersed in the album and just as enthralled by it as we’ve been.

The record was recorded by Tim de Gieter at Much Luv Studio and mastered by the always-masterful Brad Boatright at Audiosiege in Portland. It will be released on CD by Consouling Sounds, on vinyl by Init Records (U.S.) and Burning World (EU), and on tape by Bharal Tapes. The album will also soon be available through the The Fifth Alliance Bandcamp page.