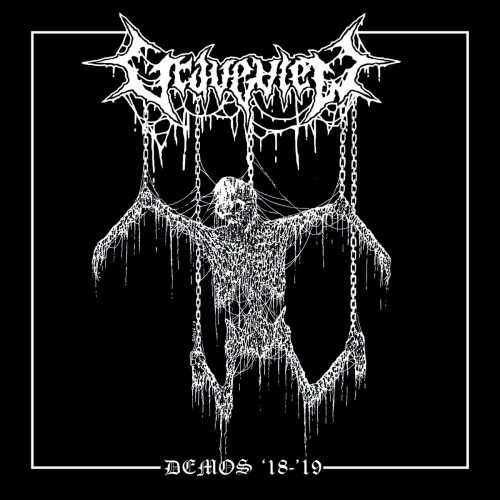 The first thing that struck me about Graveview after listening to only the first track on the recently released compilation of their two demos is how goddamn massive they sound — like being right up next to some giant excavation machine gouging out the guts of a stone quarry, operated by madmen who are ignoring all occupational safety and health regulations. 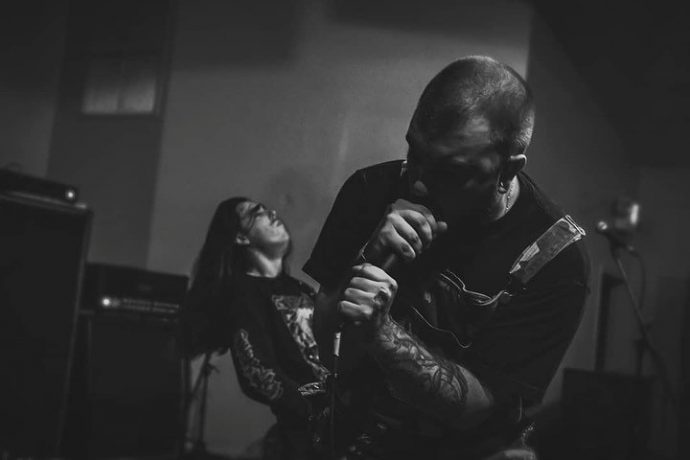 In that first song (“Selective Mortality”) off their 2018 demo, they dial up the HM-2 distortion to teeth-fracturing levels and slowly drag the heaving weight of it across the quarry of your brain, accompanied by gruesome roars and a building atmosphere of rot and foulness. With a few bursts of snare-drum battering to signal what’s coming, this Floridian demolition machine eventually starts rampaging with a rapid-fire, pile-driving riff and maniacal percussive frenzies. Back and forth they go, crawling and clobbering, and howling all the way, with a few injections of crazed soloing.

Across the other two tracks from the 2018 demo, “Grotesquery” and “Descent Into Filth”, they continue to milk that Swe-death chainsaw tone for all its worth, and continue to do a damned effective job wrecking your neck with a mountainous bass pulse and a snare attack that hits you right between the eyes. There’s, scampering, punk-like quality to the gait of the former, while the latter is a marauding rampage accented by squealing strings and episodes of stunning, groovesome punishment. It’s all quite electrifying.

The 2019 demo released through this compilation also includes three tracks. The Redefining Darkness Bandcamp stream for the comp. only includes one of those, but after a bit of pleading on this end we got a code for the streaming of the other two. So, down below you’ll find two players — the first one has everything from the comp except those two new songs, and the second one is our exclusive stream of the other two.

After the terrifying sound of screams, “Inconceivable Possession” becomes pure galloping destruction — a sonic amalgam of humongous pounding, freakish writhing and flickering, and macabre bellows and screams — plus a chugfest that threatens severe neck trauma, all of it overlaid by an atmosphere of horror. But, if anything, the second of the two new songs, “Unrivaled Punishment”, is even more maniacal and bone-smashing, more lunatic in its guitar leads, more grinding and gouging in its bleak chainsawing assaults, and more merciless in its jack-hammering of your skull.

When you’ve finished those two tracks, skip back up to the first player and become consumed by the mix of sheer misery, tortured derangement, earthquake rumbling, and (of course) convulsive crush-and-chug-fests, delivered through “Amalgamation of Insanity”.

All in all, these two demos are damned impressive. Not for naught does Redefining Darkness drop the names of Morbid Angel, Suffocation, Grave, and Gutted in describing the music. You can pick it up now through the links below; it’s being co-released digitally and on cassette tape by Redefining Darkness Records in the U.S. and by Raw Skull Recordz in Europe.

I couldn’t resist following that Graveview stream with this new song by Reek. They share that distinctive chain-sawing, smoke-belching, guitar tone, but in this case the band actually do come from Sweden, with a couple of true Swe-death luminaries in the fold.

Reek is a new project helmed by Håkan Stuvemark (Wombbath, Skineater, Pale King), who performs vocals, guitars, and lead guitars, and he’s joined on guitar by the formidable (and apparently tireless) Rogga Johansson, and by the equally formidable rhythm section of drummer Jon Skäre and bassist Mathias Back (Fimbultyr).

Reek‘s first demo track, “Reformation“, which surfaced earlier this week, finds Håkan Stuvemark channeling his inner L-G Petrov in the braying berserker vocals, and the Entombed influence doesn’t end there, though it’s the Wolverine Blues-era “death and roll” that comes through in the song’s skull-smashing and occasionally punk-like rhythms and rapidly hammering riffs. On the other hand, the song is also maniacally destructive, with through-lines of vicious, crazed grinding and a freaked-out, fire-bright solo.

If your ass is dragging and you feel in need of coffee to get your blood pumping, don’t bother with that. Just listen to this track.

In the interview accompanying Kerrang‘s premiere of the following new song an dvideo by Portland’s Vitriol, front-man and guitarist Kyle Rasmussen spells out his philosophy of death metal — that life is fucking cruel and hard, and that death metal as a form of catharsis should be a harrowing and negative experience, delivered with hostile intent and crushing impact. But if you’ve ever listened to Vitriol‘s music, you’ll have already figured that out.

That philosophy certainly comes through loud and clear in this new song, “I Drown Nightly“. The music comes to a frenzied boil immediately, like a vat of sulfuric acid heated in a furnace, backed by a furious drum attack. The rage in the song is palpable, especially in Rasmussen‘s livid growls, but the music also groans and moans in agony, as well as writhing in a kind of tortured delirium. The vibrancy of the bass is a welcome and noticeable presence, and the extended shrieking solo just makes an already electrifying and technically impressive track even more eye-popping.

“I Drown Nightly” appears on Vitriol‘s’s new album, To Bathe From The Throat Of Cowardice, which will be released on September 6 by Century Media.