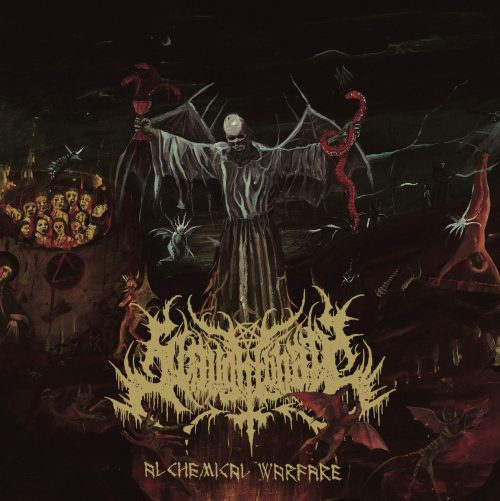 You might be surprised to learn that the Chilean band Slaughtbbath hail from San Vicente de Tagua Tagua, a small countryside town that we’re informed has no metal scene at all. It is an unexpected source for the kind of absolutely electrifying and utterly ferocious power that this demonic trio have channeled through their amalgam of black metal, death metal, and thrash — a power surge that has punched straight through the red zone on their new album Alchemical Warfare, which will be released by Hells Headbangers on September 6th — and which we’re proudly premiering today.

The band waste no time releasing the whirlwind, opening the album through “Ritual Bloodbath” with the sounds of utter mayhem and then a lightning storm of brazen, blaring riffs, rampantly maniacal drumming, and utterly vicious vocal barbarism. Those sounds are delivered with explosive volume and intensity. The guitar leads writhe like fire elementals freed from their magical chains. The percussive propulsion is both turbo-charged and seems to change in the patterns and progressions from second to second. The vocalist ultimately resorts to wild screaming, caught up in the incendiary madness of this music — and who could blame him? 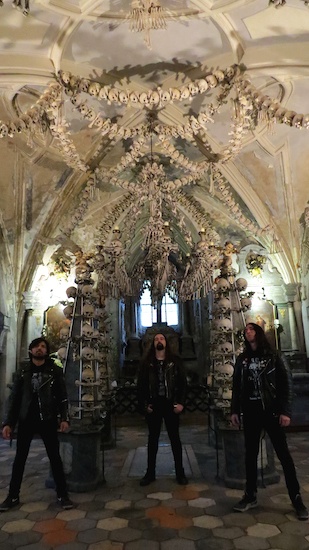 That feeling of absolutely wild savagery also floods through most of the following tracks like a hurricane-whipped storm surge. Most of those tracks are just as fast and furious, the drumming just as breathtakingly explosive, the riffing just as berserk, the leads just as freakishly ecstatic, the vocals just as ferociously unhinged. There are breaks in the riotous tumult, but not many. The horrifying, occult atmosphere at the beginning of “Cavern of Misanthropy”, carried forward into the seething Marduk-like militarized cruelty of the rest of the song by the demonic quality of the vocals, is one of those. The frightening, apocalyptic quality of that song in its slower, catastrophically pounding moments, makes it a stand-out on an album that has no real weak spots — and few spots when you can take any deep breaths.

The moody and mystical guitar instrumental that begins “Rejoined Into Chaos” provides another break in the hellish race, and the song provides a mid-paced and satanically magisterial procession before the chaos begins building again and ultimately erupts, as the song’s title forecasts. That’s the album’s longest track, and proves to be the most multi-faceted, taking a turn to a slower and more profoundly ominous cadence as the foundation for an absolutely remarkable extended guitar solo, whose searing, reverberating permutations seem to channel both misery and terrible glory. Not for naught is the track positioned at the center of the album, because it is the centerpiece in more ways than one.

A few final breaks in the firestorm come at the end, with the closer “Ascension to the Dragon”, which entwines mid-paced episodes of grandeur and terror within the song’s main devotion to unchained sonic warfare.

As crazed as most of these assaults are, the technical execution is eye-popping: In lighting these gale-driven bonfires of chaos, Slaughtbbath deliver razor-sharp, tightly integrated performances. Moreover, in the band’s near-relentless, near-rabid intensity there is a through-line of atmosphere, as well as all the extravagant, pulse-pounding energy: There is a sense of tyrannical majesty that courses through these riots of sound, a feeling of teeth-bared defiance that blends near-bestial ruthlessness with the glorification of fire and freedom. The band sound like a force of nature, reveling in excess and destruction, confident that the forces they’re unleashing cannot be stopped.

In sum, I come back to the word “electrifying”: If there’s a more electrifying album that has exploded into our world this year than Alchemical Warfare, I don’t know what it is. This one really is a breathtaking record, and one well-worth every minute of its run-time. 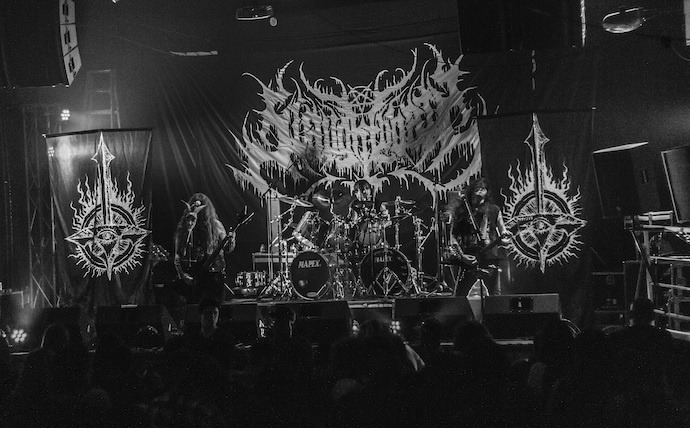 3 Responses to “AN NCS ALBUM PREMIERE (AND A REVIEW): SLAUGHTBBATH”