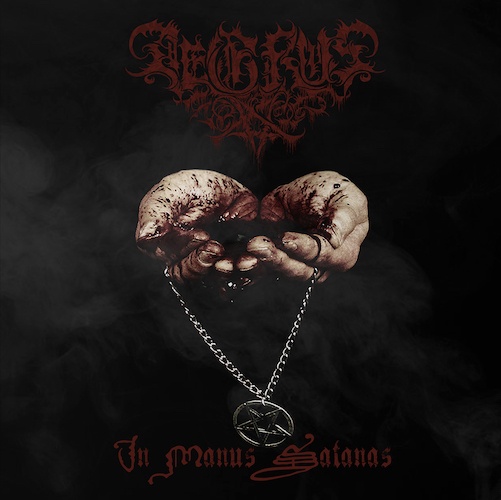 Rapidly approaching their fifteenth year of existence, the Finnish black metal band Aegrus have pursued their visions of Luciferian darkness with unwavering dedication, but with increasing skill. As the years have passed, the band has also grown from its two founding members (vocalist Darkseer Inculta and guitarist Lux Tenebris) to include long-time session live members Serpentifer (drums) and Praestigiator (guitars), and they have all joined forces for the recording of the group’s remarkable third album, In Manus Satanas.

This new full-length will be released on October 11th by the band’s new partner, the cult Finnish record label Saturnal Records. One song from the album (“Nemesis“) has previously surfaced, and today it’s our privilege to present another, aptly named “Ascending Shadows“. It’s a tremendously dramatic and emotionally powerful piece of music, with an atmosphere that’s both reverent and fearsome, both ominous and tortured, and ultimately spellbinding. It builds in intensity at the same time as it’s methodically digging its razor claws ever more deeply into the imagination and the memory, to the point when its haunting after-effects seem to go on and on even after the song has concluded. 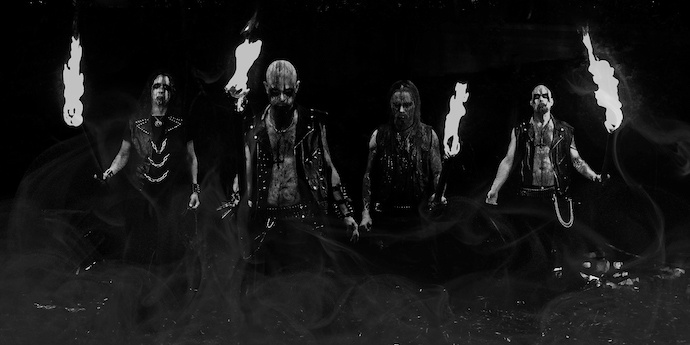 The song’s shrill initial riff itself seems to combine feelings of majesty and hysteria, of fear and exultation. When the full band join in, greatly magnifying the heaviness of the music, the feeling of looming black majesty increases. The stately stomping pace is marked by eruptions of thunderous percussion and pulsating bass, as if forecasting the intensity that’s to come. And the intensity of the music does indeed swell, with the chords braying like fanfares, the drums pounding and tumbling with deep force, and the throat-splitting shrieks becoming increasingly fervent and unhinged.

As that opening riff continues to cycle and to seep into the mind like gleaming ichor, it too seems to grow more piercing, eventually joined by a swirling, shrieking, oscillating solo whose otherworldly sounds lead the song to an extravagant crescendo, manifesting both ecstasy and grievous yet mesmerizing melancholy. As mentioned above, the effect is one that lasts, and the intertwined melodies of the song last as well. The song is an immersive experience, and proves to be a damned infectious one too.

For pre-order info, check the links below. And don’t stop with our stream of “Ascending Shadows“, because we’ve included a stream of “Nemesis” right after it.