(This is TheMadIsraeli’s review of the debut album by Portland-based Vitriol, which was released by Century Media Records on September 6th.)

I reviewed Vitriol’s debut EP in 2017, which you can read here for context, and I gave it VERY high praise. I found the band to be a refreshing new face eager to return death metal to its late ’90s/early 2000s zenith with a manic style that combined excessive technicality, song-writing prowess, overpowering posture, and commitment to their craft in the vein of Cryptopsy, Suffocation, Dying Fetus, Hate Eternal, Origin, etc.  Don’t misread my words though. I don’t think these guys are THE NEW FACE of death metal, but in the current age they do have an acute and rare understanding of what makes death metal, especially on the more technical front, so cathartic and engaging.

And now we’re here, with Vitriol’s debut LP To Bathe From The Throat Of Cowardice.  One thing worth noting is that all four songs from the debut EP are on this record, with the EP’s title track in fact closing the album.  I’m just gonna put my initial hot take about this album out there, and digress from there. 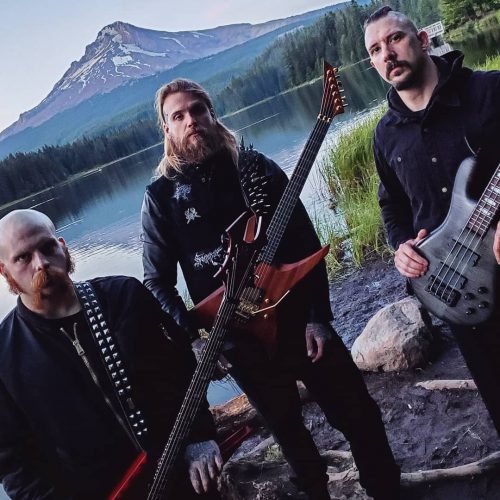 To Bathe From The Throat Of Cowardice is an absolute compositional marvel of oppressive, technically impressive, brutalitarian song-writing — that is really hurt by a super overzealous mix.  Not that I’m TOTALLY complaining, but this record has the clarity of something made in the early 2000s and it does the album a disservice.

With that said, however, this is still one of the best death metal albums released this year.  The laser precision and late-stage-rabies insanity of songs like “The Rope Calls You Brother”, “Legacy Of Contempt”, and the opening track “Parting Of A Neck” stand out; all are cacophonies of dissonant crazed riffing with paradoxically clearly defined direction, harkening back to that quality of chaos we love in the music of those other bands whose names I’ve dropped in this review. I did have a fear that a full-length from these guys might be NOTHING but that, but it turns out I had no need for such concerns. The album balances an immaculate mix of the chaotic and the hyper-technical with a more organized, militaristic blackened death in the form of such songs as “Violence, A Worthy Truth”, “A Worthy Gift”, and “Victim”.  The way Vitriol can switch on a dime from maniacal violence to crushing imperial might is one of their most impressive qualities, and one that makes To Bathe From The Throat Of Cowardice such a diverse and ambitious record in scope.

I do believe these guys are the best of the very recent new faces in death metal to come around, especially if you’re a fan of the eras I mentioned earlier. Moreover, in a lot of ways this band feels very much like a spiritual replacement for Behemoth, who have really fallen off the wagon in my opinion. Vitriol kind of hit all the notes that early/middle Behemoth hit, but are more technical, more ambitious, and more vicious than anything Behemoth ever did in those earlier stages. That’s a tremendous accomplishment given just how much of an absolute force Behemoth was back in the Demigod days.  They’ve found a way to mix that Polish imperialism and those blackened tendencies with the manic foaming mouth seizure absurdist levels of technicality and dissonance, while keeping it all consistently compelling.

I’ll go further and say that To Bathe From The Throat Of Cowardice, at least up to this point, is the best death metal record 2019 has seen.  Let’s see if anyone else can challenge them.

4 Responses to “VITRIOL: “TO BATHE FROM THE THROAT OF COWARDICE””