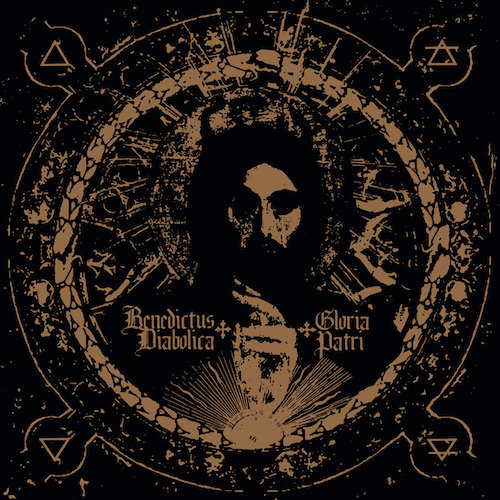 Two tracks. One of them nearly 17 1/2 minutes long, the other one just over 20 minutes, each of them denominated as a Part of a single work. That’s the new album by the black metal band Ancient Moon, Benedictus diabolica, Gloria Patri, which will be released by Iron Bonehead Productions on September 20th. Two very long pieces composed and performed by anonymous artists, locations unknown, but apparently crossing continents.

Music of such daunting length can be… daunting to listeners, and to people such as myself who feel compelled to wrestle with words as a means of communicating sound. But don’t be daunted, or deterred from listening. Patience is obviously required, but in this case it will be richly rewarded. 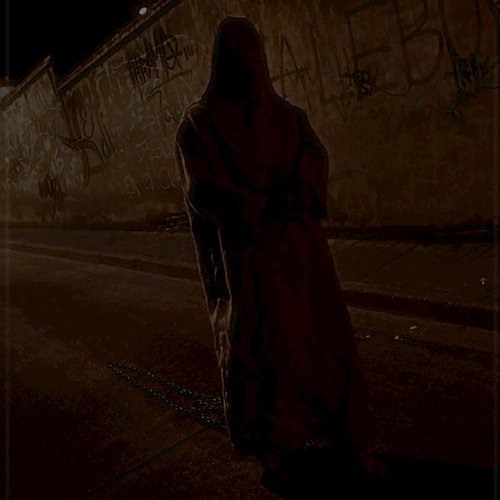 The sensations generated by Ancient Moon on Part 1 of Benedictus diabolica, Gloria Patri are multi-faceted, and the stunning nature of their combined impact derives in part from the many minutes Ancient Moon devotes to their creation. Through the use of keyboards (and perhaps guitar), the music reaches crescendos of tremendous power, drawing further energy from riotous drumming and extravagantly fervent reverberating vocals. The voices convey reverence and solemnity at the same time as they burn with a terrifying devotion. The rhythmic propulsion itself often feels like fire in the veins, a hurtling momentum that’s contagiously electrifying.

In these passages of torrential explosiveness, the music sears and soars, creating an atmosphere of frightening majesty, an apocalyptic vision unfolding on a mythic scale, as if Death itself has risen up in all its immensity, towering over the earth in a stature that dwarfs mountains, and wiping away humanity’s most vaunted (yet now feeble) creations with grand sweeping gestures, raining down fire and blanketing the skies with storming thunderheads and flashing lightning.

Of course, 17 1/2 uninterrupted minutes of such terrific (and terrifying) sounds would risk exhausting a listener at some point. And so Ancient Moon leaven their titanic displays with moments of relative calm. But it really is relative. When the thunderous drumming, the sweeping cascades of soul-scouring force, and those blood-freezing vocals diminish, the organ-like chords that ring out and reverberate aren’t assaults on the senses, but they are still frightening. Their spectral quality, and the moods of misery and doom they create, shiver the skin like a bath of ice. Those quieter shimmering passages also serve to magnify the shock of the sudden eruptions that follow them, creating juxtapositions of hypnotic yet nightmarish reveries and blasts of volcanic explosiveness.

When Part 2 begins, the music reveals yet another dimension. There is an even more solemn and ceremonial aspect to the sounds. The pacing is slow, and the melody dirge-like and oppressive, as if the accompaniment to a march toward the gallows or to a mass grave. The sound is still powerful, but shrouded in gloom. When the power ebbs, you can imagine coffin nails being hammered into caskets of old oak.

When the music eventually erupts, it’s again a shock, and once again it leads the mind’s eye to envision the rise of a cruel and heartless tyranny. It’s also a wondrous sensation, shot through with high flickering tones that seem alien and mystical. The music heaves like a leviathan and cascades like monumental rolling waves, though the drumming still provides an electrifying pulse, and the vocals (which both howl like demons and rise and fall in stately song) resonate like the carriers of invocation and praise — of death.

As in the first track, the second one ebbs and flows. But here the diminished passages are built from tribal-like rhythms and other less easily identifiable sounds that still chill the skin. They too have a near-hypnotic effect, but still a frightening one. And they too serve to create contrasts that make the surges of mystical and mortifying sound which follow them all the more petrifying.

Together, the two tracks fashion a symphony of the void above and the abyss below, an experience that becomes as entrancing as it is terrifying.

So, don’t be daunted, but do set aside the time (which you will lose track of) to become fully immersed in the album and carried away by it. You can do that through the player below.

Iron Bonehead will release Benedictus diabolica, Gloria Patri, on CD and LP on September 20. For more info about the release and how to acquire it, check the following links as the appointed date approaches.