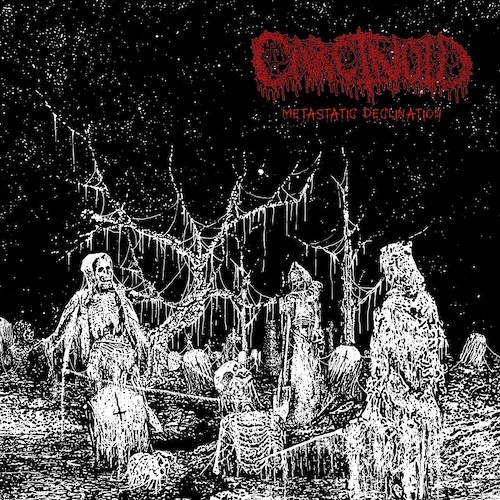 Prepare your hardened ears for a mutated offspring of death and doom that’s as foul as a rotting corpse, as punishing as a jackhammer applied to the spine, and as horrifying as a runaway cancer. All of those ghastly sensations come through with blood-congealing power in “Sickness“, the sickening song we’re presenting today off the debut album by a quartet from Melbourne, Australia, who fittingly call themselves Carcinoid.

Speaking of fitting names, the title of that album, which will be get a vinyl LP release on November 1st through Blood Harvest, is Metastatic Declination. In keeping with these naming conventions, Blood Harvest‘s publicist writes (and we can’t resist quoting him): “So odorous, pugnacious, and hideous is the music that this quartet belch forth, it verily sounds like a radioactive, cancerous growth bubbling up from a post-apocalyptic landscape.” 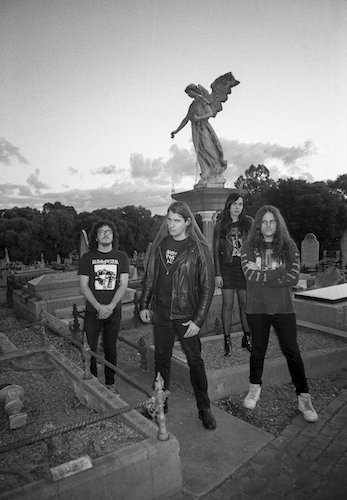 Carcinoid pull influence from the likes of Autopsy and Napalm Death, early Paradise Lost and Corrupted, Pungent Stench and Obituary, Grief and Carcass, early Cathedral and Brutal Truth. Just perusing those names will signal to you that Carcinoid display electrifying dynamism in their ugly musical creations, and “Sickness” is a prime example of that.

Gigantic, ponderous, gruesomely distorted, and severely oppressive chords launch the song, but the riffing soon starts to jackhammer and the drums to batter and boom, creating a charging juggernaut of sound. Further change occurs as the guitar squalls in horrid blasts over jagged, jabbing, mid-paced rhythms. As the song continues to cycle through these changing cadences and differing manifestations of horror, oppression, and cruelty, the vocalist bellows from subterranean vaults, his miles-deep voice echoing across the interior of the listener’s skull like a hellish monstrosity.

As the music further proceeds, the melody becomes a writhing, moaning apparition and then a vicious, swarming thing that channels savage frenzy, while the drummer executes one neck-cracking pattern after another. The band’s dynamism is indeed unrelenting, veering from mutilating chug-a-thons to the most morbid and merciless stomp-fests, every variation coated in such a dense layer of vibrating distortion that it really does feel radioactive — and cancerous.

Credit for the monstrously old school cover art goes to Necro Frost, and the album was mastered by Blood Duster‘s Jason Fuller at Goatsound. You can pre-order the vinyl album now from Blood Harvest; Memento Mori will be doing a CD version as well. Finally, if you’d like a further taste of what these deviant Australians have cooked up, we’re also including a stream of the previously released track “Suffering Reborn“.

One Response to “AN NCS PREMIERE: CARCINOID — “SICKNESS””