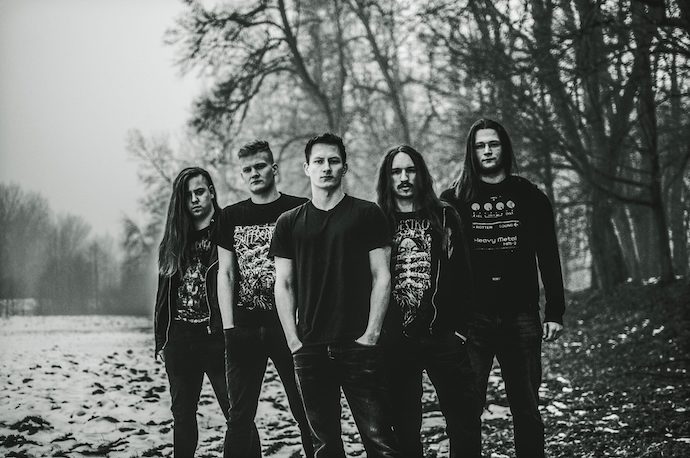 Formed in 2010, they released a straightforward grim demo, Twisted Perversions (yep, pretty primitive), in 2013, and a more sophisticated full-length work Grievous Psychosis saw the light of day in 2017. The album has its charm, so I was wondering when they planned to return with a sophomore album… Thus we organized this conversation with one of Martyrdoom’s founders, Grzegorz Młynarczyk (guitars).

Martyrdoom was started under the name Deathlust in 2010, but soon it was renamed. What motivated you to start the band and choose this direction back then?

Basically the urge to play metal. Once upon a time when Młynar (current guitar/vox) was hangin’ out with Artur, they thought that it would be cool to start a metal band. They were around 16 or 17 back in the day and we did a couple of rehearsals with one more friend (who lost the passion for heavy music over time). One day, while leaving the rehearsal, we met Sociak, Wasyl, and Kryczman, who we knew from our previous band. We jammed with them that day and on a couple of next rehearsals, playing Slayer, Metallica, Hellhammer, and Nunslaughter, and that’s basically how the band was born.

We started as Deathlust, but we’ve changed that since we found out that there’s another band in Poland with that name – and they were kinda good at the time. We took a work-in-progress name Pukedrown for a gig or two. After that a good friend of the band, Nekos, suggested we should name ourselves Martyrdoom (from the first track on Dead Congregation’s first CD) and as you can see, the name stuck with us. 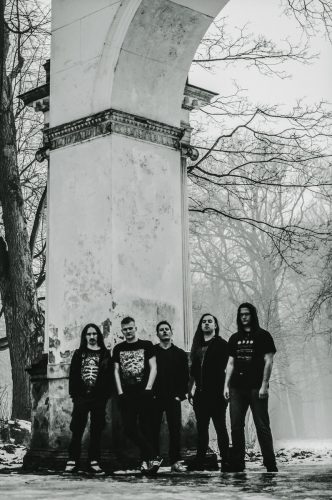 How did you spend the first few years as a band? Did you search for your own identity or did you just search for the right tag for the music you played?

As any bunch of teenagers that started a metal band. First, we were playing a bunch of covers, just to get a grasp on playing together as a band. At first we wanted to play thrash or death/thrash, but when we finally started to create our own music, we noticed that anything we were putting together sounded more like death metal, or old school death as you’d like. So that’s what we’ve been doing ever since. Our current sound is basically an evolution of this.

Despite your tendency towards death-doom metal, the demo recording Twisted Perversion (2013) rather suits conceptually some kind of extreme death outfit. Did you think to switch onto the old school death metal train, leaving doom influences behind?

We have to disagree. For us, Grievous Psychosis was a natural evolution of the things we presented on Twisted Perversions. If you look past the raw production (as we didn’t really know what we were doing back then), you can still find doom breakdowns and passages that identify us today as doom-death. We weren’t really thinking about “switching styles”. Our music evolves with our growth and development as extreme music fans, and maybe that’s the reason why tracks on Twisted Perversions sound more old school death than our current ones.

Also, Twisted Perversions was more like “we’ve got to record something to get recognition” than a thought-out recording process. One thing for sure – it gave us a lot of experience we could use later, while recording the LP.

By the way, where are the roots of Martyrdoom’s doom element? Were you inspired by particular doom bands or was it all about Asphyx, Autopsy, and Cianide?

A little bit of both to be honest. Those three bands were some of the inspirations, but we would also add stuff like Rippikoulu, Hellhammer / Celtic Frost / Triptykon, Electric Wizard, Coffins, Godflesh, Demilich, and Immolation. Other than that, we all listen to lots of different things outside of the genre, so you never know what may bring the inspiration for a new track.

The demo consists of tracks with names like ‘Goretrip’, ‘Corpsefuck’, ‘Burning Cross’, ‘Twisted Perversion’, ‘Witching Slut’, and ‘Lying Whore’. Actually I’ve listed all the tracks… So what really made you to write such lyrics?

Haha, a lot of those tracks were written when we were maybe 17 or 18 and the same goes for the lyrics for them. We wanted to be “edgy” with our horror / gore-oriented lyrics, so to speak. 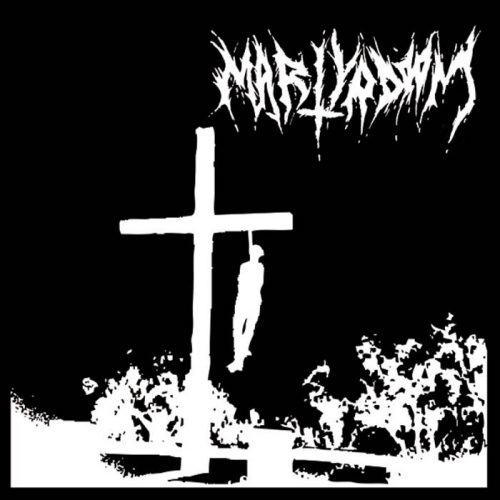 Did your approach to lyrics writing change on Grievous Psychosis? At least there is only ‘Corpsefuck’ left from the demo tracks.

The lyrics on Grievous Psychosis continue the gory, Lovecraftian, horror-oriented theme started on Twisted Perversions, but in a less crude manner (as they weren’t written by a 17 year old). In addition, we’ve got tracks like “Face Without a Person” and “Psychosis” that are more like a sonic representation of our emotions, and in a way, our venting of hate for certain people or situations that occurred in our lives. Also a one-off song called “Oldschool Death” is basically our tribute to all the titans of the scene.

As for the writing process, after we have a finished track Młynar and Sociak talk about the theme they see for the lyrics, and after they’ve got a consensus Młynar writes them. Afterwards when we play the finished song, we fix some words or rhythmic patterns of the lyrics, together as a band.

Currently, Młynar takes most of his inspiration from old school slashers, current political events around the world / Poland, and from the works of H.P.L. – nothing new to be honest.

Current political events? What disturbs you most nowadays? By the way, why is “religion” absent from this list of inspirations?

Oh man, don’t even get us started on politics. Even though Martyrdoom’s music is non-political, and will stay this way, we hate what we see around the globe, and that’s the inspiration — the ever-growing hate for stupidity.

What disturbs us the most? Tricky question. We’d have to choose from the far right or stupid American-like far left. On one hand you have people who want to execute other people who don’t fit in their narrow-minded, conservative dogma. On the other you’ve got people so blinded by their ideology that they basically turn into the same thing they wanted to fight in the first place. Don’t get us wrong, we’re far off from people saying “antifa and nazis are the same”, it’s just sad that common sense is getting lost on the good side.

On the side of Polish politics, we’ve got a far-right, Catholic government that gives a silent acquiescence for violence against minorities, LGBTQ+ community, and anything that is anti-patriotic. It’s a crazy mess and you can seriously get tired of getting angry at their next stupid ideas. A couple of days ago we heard they want to make an “artist card” to decide who’s allowed to be a “professional” artist and who is not. Like what the fuck? And people are still gonna vote for them because they’re giving a shitload of money to the white-trashes.

As for religion, we didn’t mention that because for us it’s kinda obvious in the music we’re playing. We despise any form of religion and it can be heard in a couple of songs. Maybe not as in-your-face as in the track “Burning Cross” from Twisted Perversions which is about burning the corpse of Jesus so he wouldn’t rise again, but the themes are still there. Who knows, maybe our new tracks will be more anti-religious. We just don’t really care about religion nowadays when there’s other topics to be sung about. 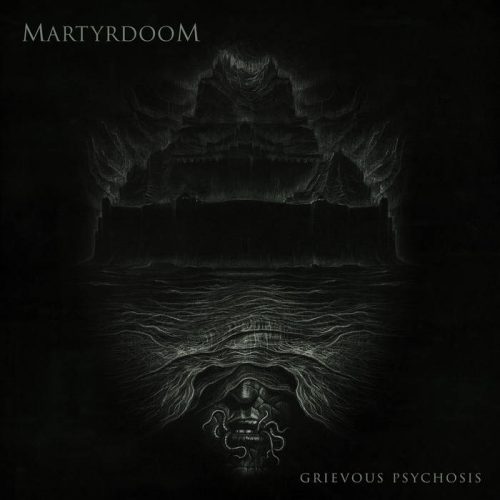 The album has a raw old school feeling, and at the same time it’s quite potent and fresh. How long did you work on it in the studio?

A shitload of time, but we did everything ourselves, hence why. It was the first recording we did with our (then) new guitarist Marol, who replaced our previous one, Kat. We recorded the drums at our rehearsal place, and guitars / bass with vocals at Sociak’s place. Then – the mixing came. Our album was almost finished about a year before the release. When we had it recorded, we started looking for a label to put it out – we hooked up with Memento Mori. Raul loved our music, but he told us we need to record some more music, because the thing was just too short. We weren’t able to recreate the sound of the first session, so we basically re-recorded the whole thing with 2-3 tracks added.

Overall, the whole process was kinda tedious — we were constantly changing things since the first recording session, until basically the end of it. But that exhausting process resulted in something we’re all really proud of.

The extreme metal scene is filled with bands nowadays. How would you summarize Martyrdoom’s strong sides?

We don’t have sticks up our asses like many of the bands nowadays do. And we play because we love it, we don’t really give a fuck about anybody’s opinion nor do we dress ourselves like christmas trees to make up for the music. We’re doing it for the kick of it. For that feeling of madness when you’re on the scene, or under it — if you like it as well, then good for you, grab a beer with us. If you don’t, then whatever, we’re not going to bother with that.

Martyrdoom is based in Warsaw, so I believe that it’s not a big problem to organize gigs there. How often do you play live? Do you have a company of bands with whom you used to play together?

Not so often as you would think. The scene in Warsaw is highly over-saturated with bands, and people often just don’t bother with a third-league underground death-doom band. We mostly try to play one-offs, while supporting someone bigger than us, or alongside bands we’re friends with (both in the capital or outside of it) like Cancerfaust and Anus Magulo, among others.

How do you see Martyrdoom’s prospects of playing abroad? Have you already played in other countries?

Nope, not yet. But that’s the plan for the nearest future. If someone wants to invite us for a show or a tour – we’re up for it, and we’re cheap. We’ll play for gas, weed, and vodka.

What’s your plan for a sophomore album? Do you already have some ideas for it?

We started working on the songs for it at the beginning of 2019. The plan is to have it recorded by the end of 2020 if everything runs smoothly. You can expect more gore and horror influenced caveman riffs for sure. Hailz!