(Accompanied by a full stream of the album, this is TheMadIsraeli’s review of the new album by the Swedish band In Mourning, which will be released on October 4th by Agonia Records.)

I’m kind of in a strange place when it comes to In Mourning. As far as melodic death metal goes, they are one of the genre’s best exports and one of the best bands of the style in a modern era extremely lacking in such. However, I feel that with the band’s last record, Afterglow, they started to make a very deliberate departure from what defined them and revealed an interest in expanding their horizons. I loved Afterglow, but it became impossible not to notice the band engaging in a little more ’70s prog death, and adopting some black metal and more post-y elements into their sound. In Mourning aren’t what I first looked to them for any more, not that that’s at all a bad thing, but the new path they are treading feels like it’s a work in progress.

That isn’t to say the band’s new album Garden Of Storms isn’t good. It’s fantastic, and it’s a super step up from Afterglow in just about every way, but it also definitively signifies that the band are done with their take on the doom-driven melodic death metal style and want to be more of an amorphous progressive band with a death metal foundation. 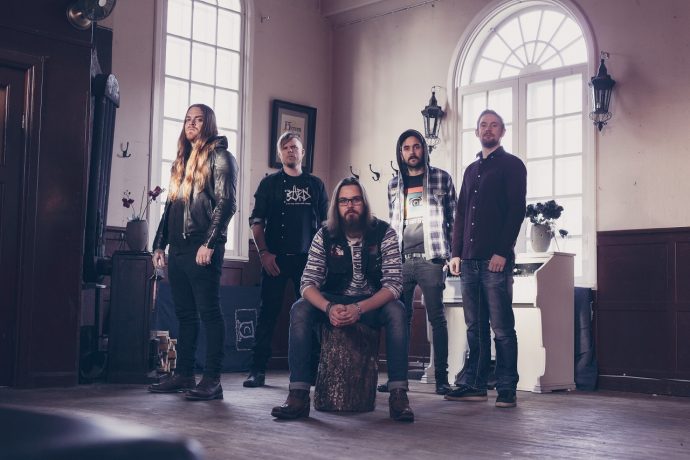 It sounds like In Mourning are really on a listening kick of anything Dan Swanö-related, Opeth, and a lot of the doomier/groovier more black’n roll side of things (Khold and maybe a little bit of Enslaved come to mind). As I hear it, opener “Black Storm” is a majestic piece of progressive black metal with a ’70s flair, and it’s a fantastic opening to a pretty expansive album.

Other songs like the sort of ’70s take on Death’n Roll thrasher “Hierophant” demonstrate just how weirdly In Mourning are willing to pull together their various tangled musical threads to make something feel complex and all their own in ethos alone. Even songs you might argue are more traditionally In Mourning, like “Huntress Moon”, are more about an oppressive sense of melancholy conveyed in a much more aggressive manner. Instead of being a wall of sound that just washes over you, the heavier songs are torrents of layered melodic tapestries backed by constant blast beats.

The songs where the band go full Opeth and Dan Swanö, though, are some of my absolute favorites. The pre-closer epic “Tribunal Of Suns” is EASILY the best song on the record, all the swagger and prestige of Opeth channeled into In Mourning’s sense of misery and angst in a lyrical riff driven extravaganza that shows the height of the potential for their new sound since Afterglow. The previously mentioned opener “Black Storm” falls in this group of songs as well. Closer ”The Lost Outpost” is also a highlight and may be the best closing track In Mourning have ever written (next to “Past October Skies” from Shrouded Divine).

Garden Of Storms is certainly a great album, but I still feel we have yet to hear the peak of this new sound In Mourning have been developing. It shows just how talented the band are, proving their ability to switch gears and pull off the changes from where they began with equal mastery and proficiency. And at the end of the day, it’s still In Mourning. It grooves, it’s miserable, and it’s majestically powerful and driving all the same.