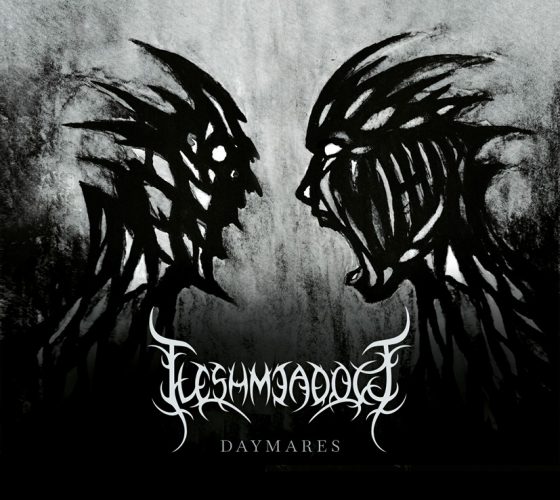 (TheMadIsraeli introduces our premiere of the new EP by the Norwegian band Fleshmeadow, which will be released via Bandcamp on October 11th.)

I try to avoid hyperbolic statements about how a new or new-ish band to the scene are paving the way for their style or how they’re the sickest fucking thing I’ve heard in forever, but Fleshmeadow are one of those bands to me.

I reviewed and we premiered the band’s debut album Umbra back in 2016‘s final days, and it was one of my favorite records that came out that year.  Their uncanny mastery of technical black metal mixed with touches of ritualistic death metal and a bit of deathgrind really hit a note in my soul that screamed with feral ecstasy.  I’ve listened to Umbra regularly since I discovered it and have eagerly awaited what I would hear next from these blasphemous Norwegian carnage mongers.

The band’s first new music in three years, and today’s subject, Daymares, is a four-song EP containing quite frankly some of the most majestic, feral, but progressive and fusion-minded brutalitarian black metal I’ve heard all year.  They double down on everything that hooked me to begin with, channeling the best of bands like Mayhem, Keep Of Kallessin, Khonsu, or Old Man’s Child with just a bit of Chaos A.D– era Sepultura, Gojira, Obscura, Decapitated, and the like.  The musical steps they’ve taken forward on this EP are astonishing, even by the lofty expectations I had for them.

I suppose it’s silly to some people from the outside looking in that I’m calling Fleshmeadow a black metal band, since so much death metal is in their sound, but black metal nowadays really feels like it’s more about an ethos.  The signature elements are there — a good deal of the vocals, the emphasis on full chords and tremolo-picked sections — but I find the machine-gun death metal riffing a pretty delicious complement to what’s already going on here, carried by the band’s pristine song writing.

I hope you’ll all enjoy Daymares as much as I have, and I’m only more stoked to hear the next batch of music from Fleshmeadow in the future.

3 Responses to “AN NCS EP PREMIERE (AND A REVIEW): FLESHMEADOW — “DAYMARES””