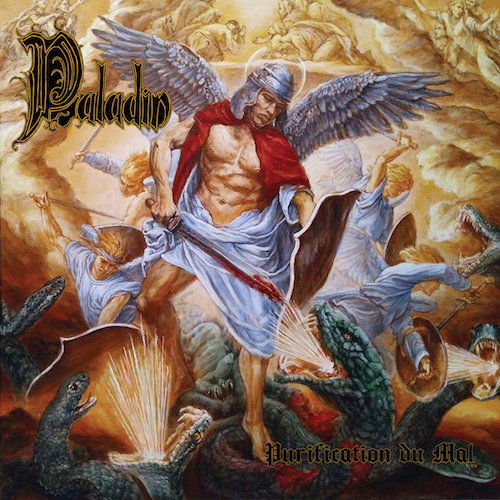 (The following conversation is Comrade Aleks‘ interview of Louis, vocalist/bassist of the Quebec death/doom band Paladin, whose debut album was released last month.)

Paladin is a brutal death-doom metal project started by Louis a.k.a. Napalm Holocaust (vocals, bass) from Canadian thrash band Survival Instinct. Louis performs stuff in the vein of Asphyx, Autopsy, and Rippikoulu together with his colleague Will (guitars) and busy maniac N.C. (drums), who has experience in quite extreme yet obscure local metal bands. They’ve been working together in Paladin for about two years, and Vrid (bass) joined them not long ago.

Their debut album Purification Du Mal just saw the light of day on the 20th of September due to the  efforts of PRC Music. As you see the artwork, you may think it’s some Christian stuff, but don’t be fooled, that’s an opposite thing. Louis isn’t a very talkative guy, but he has managed to uncover a few things about Paladin for us.

Hi Louis! You got some experience playing with fast and brutal guys like Crasse de Marde, Survival Instinct, Abusor, and Sin. It seems you are always occupied playing extreme metal. What drove you to start one more band?

I never really got to play Old School Death Metal. I had a couple songs on the side more in that vein, so I started from there. I always loved extreme metal and the old school sound, so it was a good moment to start Paladin.

You recruited your band mate from Crasse de Marde, Will (guitars), new man Vrid (bass), and experienced brutal drummer N.C. to perform this task. Do you remain the solid music and lyrics writer in Paladin?

Yes, William helped a lot from the start to give life to the project, but I had most of the songs already composed before I reached out to them. N.C. helped quite a bit with vocal rhythms during the recording process.

Did you leave some space to improvise in the studio or was everything strictly planned and written to note?

The core was set, the rhythms and tempos. But we definitely added to it in the studio. Something that comes to my mind is the ending of “Diablerie”. We had some extra bars for the drums to fade out, and the little ending N.C did I found to be pretty good, so we just didn’t cut or fade anything.

You started with the tape single Le Mal Dans La Nuitin in 2018. Back then did you already have the same Paladin concept you kept on Purification Du Mal?

Yes, the concept is picturing the oppression of religion and high class influence, in a satirical manner.

Purification Du Mal looks like a concept album, and as your lyrics are written in French (and I appreciate this authentic approach), and it’s said that “Paladin is a satire of bourgeois and religious oppression”, so I’d like to ask you what’s it all about?

It’s pretty simple. The texts are always from the oppressor perspective, and exaggerating their character to reflect the evil behaviors that plagued our past.

What kind of events or personal experience pushed you to approach this theme? To say it straight – would you tell more about lyrics?

I have a bad relationship with authority, and I like to watch events unfold and think about them. No personal experience really went into it, so it’s pretty much an expression of my disgust for hierarchy. I give the ideas behind the songs to “Vicissitude”, and she writes something about it.

Who’s the author of this striking artwork? Did you discuss with them the album’s concept before they started work?

Marie-Pier Lapointe, a painter from Quebec. She did the artwork for Ultra Raptor, and with the quality of the painting, I went to her for the artwork. I explained what I had in mind and she did what she is good at.

Purification Du Mal is just released. Do you aim to promote it actively? Or is the fact of this release enough for you?

In collaboration with our label PRC Music, we are actively promoting the album. It is also quite widely distributed with all PRC Music partners.

You point out that your main influences in Paladin are Autopsy and Rippikoulu and you tag Paladin as a death-doom band. What attracted you to these bands? It seems that you are more focused on the death metal side of this matter, and doom comes in addition.

I did not want to fall too much in the classic doom metal, but more as I talked earlier experiencing, by playing old school death metal. I really like the Cavern Core simple low and slow riffing and rhythms, stuff in the vein of Onward To Golgotha from Incantation. Also the fact that Survival Instinct is pretty much always very fast, it’s hard sometimes to keep it slow hahaha!

Rippikoulu is quite an obscure band — how do you see their semi-cult status?

That band is awesome, their sound, their ambience. The mix of slow and fast. They are cult for me!

Purification Du Mal has a thick, solid sound with some rough edges. Where did you record the album? Were you all in the studio at the same time or did you record it separately?

We recorded at Studio Lelabs in Quebec City. It’s the same studio where we had recorded Survival Instinct‘s first album Hellocaust and I knew I could get a good sound yet not overproduced, to keep the old school sound to it. We all recorded separately, but I was there for most of the recording process. William mixed it himself with my comments.

Did you have any probs during recording? Were there some songs which just go hard in the studio?

In general, it went very well. The mastering took a bit longer because some stuff was bugging me from the mix that were more hearable with the mastered tracks. But everyone involved in the process was pretty good at what they do, so problem solved quick.

Are you going to perform gigs with Paladin? You and Will are in Survival Instinct, which seems to be an active band, and N.C is busy with Kremlin, so is it a question of time management?

Probably, we are playing together at N.C‘s place a couple times per month. I was playing the bass in Kremlin for over a year now, but it’s on ice at the moment — our guitar and also vocalist was busy with his other project. That was also a good motivation factor to work more seriously on Paladin.

So you haven’t played that stuff live yet?

Not officially. We always have people coming around the jam space, so technically, since sometimes we are getting more numbers than certain gigs, that is almost like playing live, hahaha

Louis, do you feel you can keep the focus on Paladin further? What are your plans towards the next album?

There’s always a little downtime in the underground world, and that’s what actually helps keep the focus. Gotta stay busy, musically speaking. Each project is different in itself but also reflects us, as metalheads, and old school maniacs. Working on Survival Instinct, I can come up with a Crasse De Marde riff, or a Paladin one. And vice versa. Playing in two bands of the exact same genre would be conflicting, and for sure weird for me. That was also a motivation factor behind the creation of Paladin — I could now use some of my stuff that was too slow or death metal for my other bands.