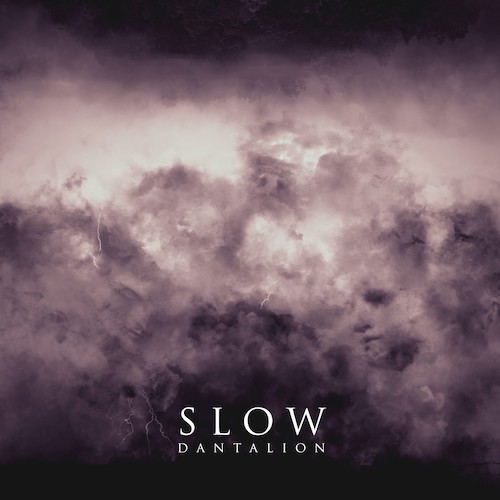 As the title suggests, VI-Dantalion is the sixth album to be released by the Belgian band Slow (although the fourth album was separately released on three occasions in varying manifestations of sound). Now firmly ensconced in their own citadel of atmospheric funeral doom, Slow earn their name on Dantalion, but as you’re about to discover, the music is not only slow, it is shattering in the magnitude of its crushing emotional impact.

The means of discovery comes through our premiere of a track called “Géhenne“, which we present through a lyric video in advance of Dantalion’s release on November 8th by code666, a sublabel of Aural Music.

The atmosphere of “Géhenne” is unmistakably apocalyptic, devoid of hope and steeped in misery and despair. Backed by shimmering ambient sound, gigantic snare and cymbal crashes detonate, and crushing bass tones ring out and are left reverberating, eventually accompanied by truly cavernous growls that themselves go on and on. The sound is immediately mortifying, but a sense of tension builds as the backing sheen of guitar and ambient sound magnifies in intensity and the groaning bass and sharp crack of the snare appear more frequently.

That gargantuan voice rises toward heights of agony, just as the music itself seems to swell like a titanic ocean wave that builds in slow motion under storm clouds glowering overhead, rising to towering heights without cresting, or (as the lyrics suggest) like a slow-motion upheaval of barren earth where nothing will ever grow. The riffing becomes an inexorable pounding sensation, punctured by the drummer’s gunshot cracks and shrouded in the tension-filled backdrop of sound, until all is lost in silence.

Like “Géhenne“, the album as a whole (as the label says) is all-consuming in its atmosphere — “compelling, captivating, emotional and even renewing”. It’s available for pre-order now:

One Response to “AN NCS VIDEO PREMIERE: SLOW — “GÉHENNE””