It’s been a hell of a week, and I do mean HELL. I’ll spare you the details, because no one likes a whiner (except the core supporters of our current President), but mishaps befalling a loved one and demands by my fucking day job have interfered (again) with my NCS time. These round-ups are always the first casualties when such things happen, so I thought I’d use this relatively placid Saturday morning to catch up a little.

I picked the following songs a couple of days ago after a rare opportunity this past week to do a bit of listening. Many other new songs have come out since then, adding to the long list that already existed, but I decided not to listen to anything else new and just get this done.

Jeszcze Nie Mamy Na Was Pomysłu is the name of the second album by the Polish black metal band Gruzja, whose line-up includes members of Furia, Mentor, and Biesy (among other groups). It’s set for release (CD and digital) on October 22nd by Godz Ov War Productions, but the whole album is already streaming on Bandcamp. Google Translate tells us that the album’s title, in English, is “We don’t have an idea for you yet”. But Google Translate has a habit of mangling its translations of the Polish language, so I wouldn’t put too much stock in that rendition.

When I began the process of selecting music for this round-up, I only found one song from the album (“800 ZŁ”), which grabbed me in a head-lock, and only this morning discovered that the whole record had been launched on Bandcamp. Consequently, my impressions of the album as a whole may be a bit mangled, too, and have certainly been rendered hastily. 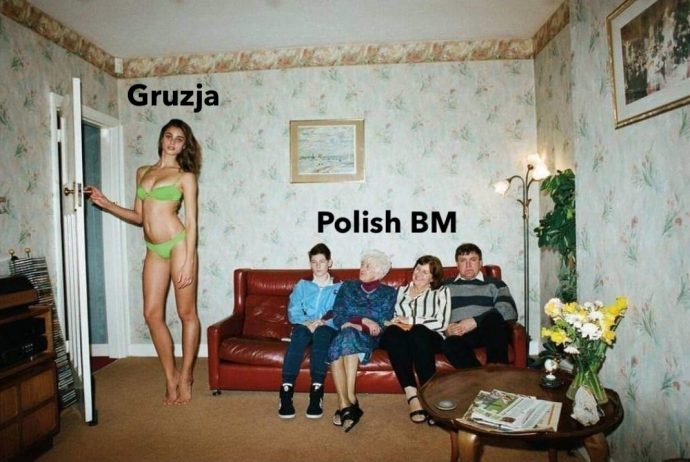 Gruzja are, shall we say, irreverent. Their motivations and lyrical themes seem to focus mainly on sex, and secondarily on drinking heavily, though I gave up my investigation of their lyrics after it became apparent that Google Translate was delivering mainly gibberish, and perhaps some Polish cultural references that were beyond me.

As for the music, it’s very good, and much more grim and cutting than you might expect from what you’ve just read, though there’s plenty of carnal swagger in the slashing riffs and rocking beats as well. Speaking of beats, the drum rhythms do occasionally erupt in double-bass or blast-beat flurries, but that’s not their mainstay. Accompanied by a pulsating bass lines, they’re more devoted to getting your head moving, while the remaining instrumentalists are delivering a wide range of searing chord cascades, body-wracking riffs, and keyboard layers (at least I think they'[re keyboards) that lend the music an air of grandeur or spooky futurism. There are also some songs that made me imagine black metal polka.

The vocals are fantastic and are themselves wide-ranging, from vicious throat-cutting snarls to crazed screams, ugly growls, pungent grunts, and even a fair amount of singing which has its own allure. At times I found myself thinking of Rammstein‘s Till Lindemann. And, as you’ll discover, like Rammstein, Gruzja are damned adept at cooking up melodic hooks that stick these songs in your head.

No two songs on the album are exactly in the same vein, and you may find yourself digging some of them and disliking others, depending on your tastes. Some of this isn’t black metal at all (the rocking “Kamera Dionizosa”, which includes some intensely seductive guitar work, is a prime example). Some of it dances, with a post-punk vibe. And some of it is downright vicious and depraved, or moodily grandiose. But these unpredictable variations are a big reason I’ve become such a big fan of the album.

(Thanks to Miloš for sending me the link to Gruzja.) 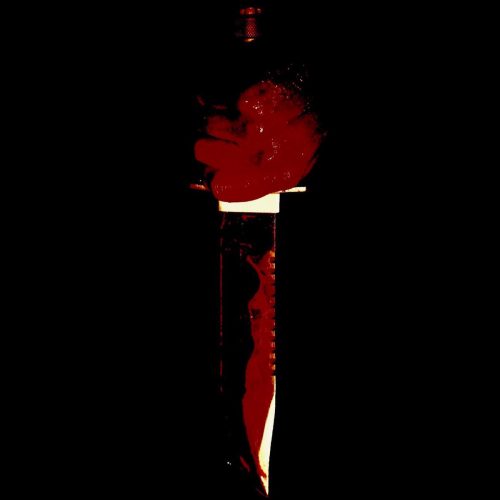 Villainous Temple‘s debut EP, Homicidal Starts, came out in April but I didn’t find out about it until last week, thanks to a recommendation from a close collaborator on Northwest Terror Fest (promotional plug: we’re presenting the fourth edition of the fest in Seattle next spring). I had kind of an immediate lustful reaction to the EP by these hate-filled Portland murderors, so I thought I’d share it right away.

You’ll figure out right away, from the opening song “Glass Shards”, that Villainous Temple are fully capable of delivering cruel and crazed black/death slaughtering AND capable of doing that while simultaneously insinuating guitar melodies that give the songs individual character and make them memorable.

The belly-deep, serrated vocals are monstrous; the cold whirring riffs are grim and barbaric, and sometimes destructively jackhammering; the rampant drumming and vibrant bass provide big adrenaline kicks and big head-moving grooves; and the leads veer from moods of misery and pain to manifestations of fiery defiance and tyrannical oppressiveness. The songs are short, and so the EP kind of flies by, but in short order it makes a very favorable impression. I’m eager for more, and soon. 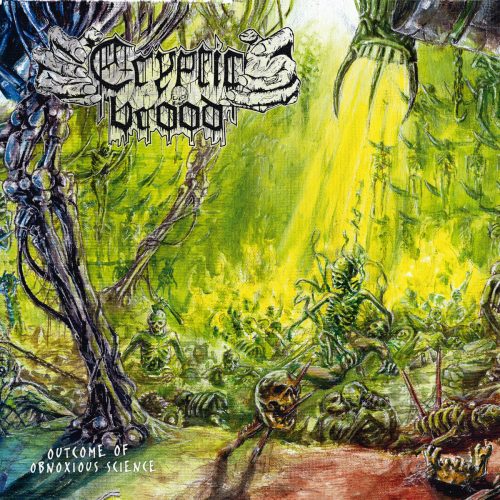 Somewhere, sometime, there must be a convening of psychotherapists and musicologists who will devote themselves to analyzing why large factions of metalheads revel in the sound of rot and bathe their minds in the filth of suppurating decay. I certainly can’t explain it, but I certainly do enjoy it — and in early 2017 I found a new group of ghouls who delivered the experience with precocious mastery.

I’m referring to a trio from the wonderfully named town of Wolfsburg, Germany, who call themselves Cryptic Brood. In 2015 they self-released a demo cassette named Morbid Rite, which was soon released by different labels that same year, and then Xtreem Music vomited forth the band’s debut EP Wormhead in September 2015. In 2017 the same death-loving Spanish label released Cryptic Brood’s debut album Brain Eater, from which we premiered a nasty track named “Slurping Reeking Slime”.

Now these purveyors of all things rancid and rotten are returning with a second album, deliciously entitled Outcome of Obnoxious Science. The first advance track, “Biting Through Flesh“, is a very promising herald for the new album. It’s damned infectious, thanks to some killer opening riffs and diseased leads, but after setting the hook with those, the band start romping and rampaging. The rhythms and pacing change, and the atmosphere of the song does too (it gets pretty gruesome before it ends), but the song rocks hard at all times.

Outcome of Obnoxious Science will be released on November 22 by War Anthem Records. 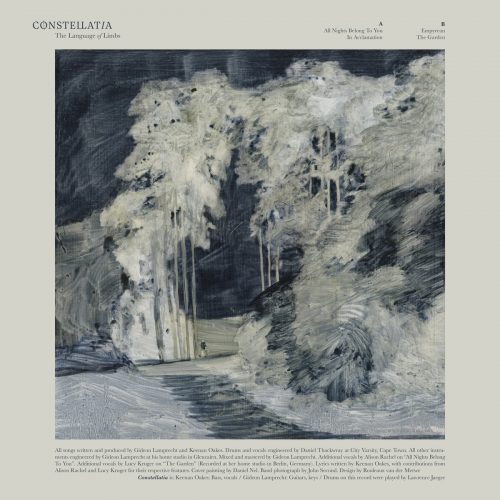 In years past we devoted significant attention to the South African band Wildernessking — who then split up sometime after releasing their 2016 EP Levitate. That band’s bassist/vocalist Keenan Nathan Oakes went on to form a new project named Constellatia with his countryman Gideon Lamprecht of Crow Black Sky (about whom we’ve also written in the past), who handles guitars and keyboards. Their debut album, The Language of Limbs, will be released on November 15th, and includes guest vocal appearances by Alison Rachel of Honeymoan and singer/songwriter Lucy Kruger.

The duo characterize the album as “essentially a post-metal record with black metal and progressive influences, and a healthy dose of ambience and atmosphere,” with “a flair for the romantic and nostalgic”. They recommend it for fans of Cult of Luna, Opeth, Pink Floyd, or Wolves in the Throne Room.

The first single, presented through the entrancing video you’ll find below (made by Pieter Jordaan), is “All Nights Belong To You“, bears out those descriptions and references as it moves through differing shades and phases. At the outset, driven by a blasting percussive drive, lush but melancholy keyboards wash across the top and a plaintive melody rings out like chimes. The vocals here are tortured shrieks and screams. As the drumming segues into a more measured gait, the music’s sorrowful mood deepens (though the melodies are quite beautiful too).

When the drumming vanishes and dreamlike ambient music takes over, Alison Rachel carries a new melody in soulful tones, rising to a beautiful falsetto as the drum and bass return. When the drums begin racing again, and the music swells, it’s a glorious experience — and, most definitely, a feeling of romance and nostalgia permeates the music’s mood. The vocals amalgamate pain, grief, and anguish. Overall, it’s a sad song, and one that poignantly wears its broken heart on its sleeve. And it’s also one that’s hard to forget 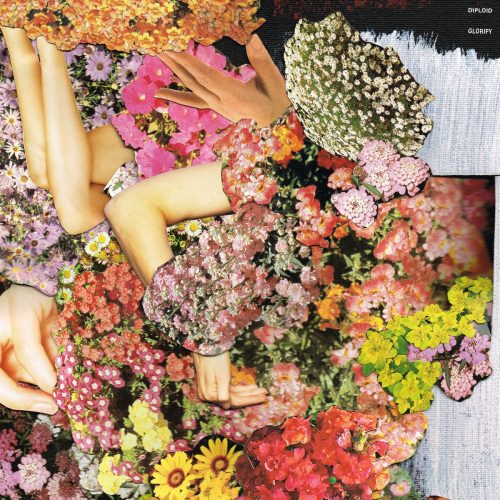 More than three years have passed since I last wrote about this Australian group, and their debut album Is God Up There?, but I do generally remember being rattled and surprised by what I heard. There was an intervening album, 2017’s Everything Went Red, which I managed to overlook, and now they have a third one named Glorify that’s set for release on November 20 by Art As Catharsis.

“Homicidal Art” is the first advance track from the new album. Like other songs in today’s collection, this one has a big rocking drum rhythm, which here becomes the main accompaniment to some truly throat-ripping screams of pain or rage, or both. When the heavy guitar crashes in, it’s like being hit by a big ocean wave you didn’t know was coming. The rhythm of the song remains compulsive, but the needling guitar lead that arrives is unnerving enough to put your teeth on edge, and the skittering noise at the end feels like it’s about to lead into something nasty before an abrupt stop. We’ll have to find out what happens next when more of the album becomes available.