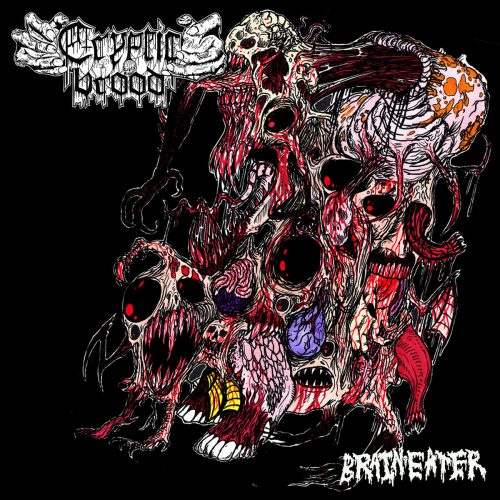 Somewhere, sometime, there must be a convening of psychotherapists and musicologists who will devote themselves to analyzing why large factions of metalheads revel in the sound of rot and bathe their minds in the filth of suppurating decay. I certainly can’t explain it, but I certainly do enjoy it — and I’ve found a new group of ghouls who deliver the experience with precocious mastery.

I’m referring to a trio from the wonderfully named town of Wolfsburg, Germany, who call themselves Cryptic Brood. In 2015 they self-released a demo cassette named Morbid Rite, which was soon released by different labels that same year, and then Xtreem Music vomited forth the band’s debut EP Wormhead in September 2015. Now the same death-loving Spanish label is going to release Cryptic Brood’s debut album Brain Eater on the first day of March.

In advance of that foul event we have a song to share with you. Not mincing words, the band named it “Slurping Reeking Slime”. 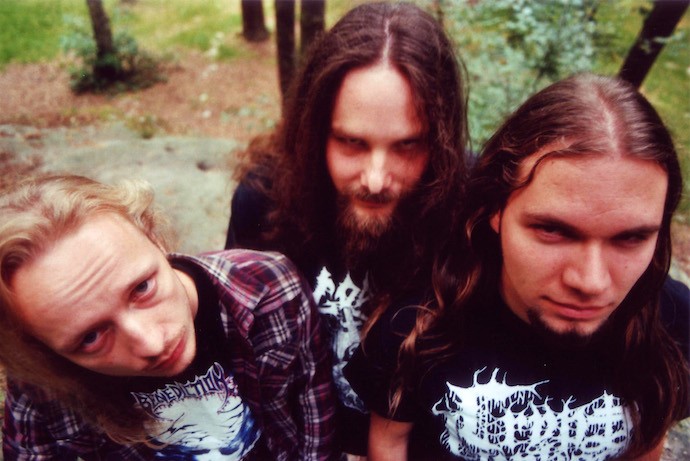 When you hear the song, it will come as no surprise that Cryptic Brood have fashioned their music by drawing inspiration from such bands as Autopsy, Winter, Asphyx, and Hellhammer, as well as newer groups like Derketa and Undergang. As the band explain:

“The brood’s debut full-length presents lobotomizing death metal rotteness flavoured with grinding eruptions and creepy doom to mangle your brain. Nine putrid tracks will contaminate your mind with filthy slime from the sewers of Wolfsburg/Germany. The song ‘Slurping Reeking Slime’ is a representative example of this varied death metal madness that will be released on CD via Xtreem Music on 1st March 2017.”

This new song romps and rampages at first, introducing the listener to an organically disgusting guitar tone, and then it… decays… collapsing into a sluggish, slimy crawl with a melody as dismal as a mortuary lab and vocals that are both roaring and shrieking in a ghastly mix of terror and hunger.

To repeat, Brain Eater will be released on March 1 by Xtreem Music. It’s available for pre-order here: