At the beginning of Unaussprechlichen Kulten‘s new album Teufelsbücher we hear a haunting piano melody and the swell of symphonic strings. The stateliness and solemnity of those moments is at odds with nearly everything else that comes after, and yet its mystifying grandeur is in keeping with the magnificence of the insanity that soon ensues and never really relents until the grandiose and sorcerous extravaganza of “Necromancy and Torment” brings the album to a close.

The six songs on Teufelsbücher are asylum dreams, hellish visions of menace and madness that also relentlessly challenge the listener’s own sanity. The ever-twisting-and-turning compositions are ecstatically exuberant and the performances technically bewildering. The music boils like an overheated cauldron of unchained creativity, un-tethered to trends and un-bowing to conventions. It’s as if the band, in the throes of a possession, succeeded in opening Pandora’s box, loosing upon the world, through the sounds of mutated death metal, a torrent of bat-winged and brazen evils, never to be sealed again. 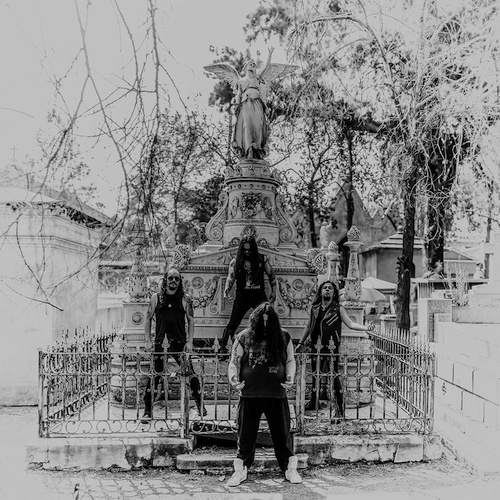 If you’ve heard the first advance track from the album, you’ll have a good idea of what to expect. “Cranquiluria” creates a violent and hallucinatory atmosphere, blending sickening, dissonant melodies with bursts of savage chaos. Rapidly veering, angular fretwork, thunderous drumming, plundering bass notes, and ferocious growls combine with rampantly skittering riffage and freakish, screaming solos to deliver a mind-warping, mentally destabilizing thrill ride. The clarity and power of the production reveal the mind-bending intricacy of the music in detail, but it takes more than one trip through this mad whirlwind to decipher more than fleeting glimpses of all the adventurous nuances.

Like that first excerpt from the album, the other five songs are densely packed with intricate movements and display fiery derangement. They are whirlwinds of constantly changing tempos and drum rhythms; gravel-chewing but mercurial bass lines; jittery, darting, seething fretwork; and full-throated, serrated-edge bellows. The drumwork bludgeons and scampers, seems to turn somersaults in the air, and detonates like megaton warheads. The fretwork spews flurries of lunatic dissonance and shrieks of unhinged savagery. The soloing is crazed and cavorting, wailing and screaming.

There are not many breaks in the full-throttle mayhem — it’s one maniacal, electrifying adventure after another. The experience is technically brain-boggling, but creates changing moods that can be dismal and deranged, insidiously poisonous, morbidly doom-stricken, psychotically hallucinatory, and viciously pummeling. With guitar excretions that are queasy and quivering, menacingly insectile, and joltingly angular, the songs don’t follow any straight lines, and are more than a little unnerving, but their fascination is undeniable.

One of the songs (“Keziah Lilith Medea”) is laced with episodes of eerie chiming tones, extravagant drum explosions, and weird, near-gagging vocals, and there are mystical symphonic-and-piano intros to “Search and an Evocation” and “Necromancy and Torment”, and those diversions aren’t unwelcome, but the album’s main attraction is how completely these Chileans have given themselves over to their own wild muses (the ones formerly locked in Pandora’s box).

For the same reason, this is a challenging album, because it is so single-minded in its devotion to whirling viciousness, deviant dissonance, and mentally up-ending instrumental exuberance. It’s as if Necrophagist, Atheist, and Gorguts were made Princes of Hell in exchange for the loss of their sanity. But for all its challenging aspects, you can also lose yourself (and your mind) in this album. All the songs are spectacles. However, for this listener “Flapping Membraneous Wings” stands out for its glimmering panoramas of mystical and maniacal magnificence intertwined with episodes of jackhammering groove, and for its slow, surreal finale. That closing track, “Necromancy and Torment”, is another stand-out — it’s mayhem on a grandiose scale, but also moans and drags, clearing a rotten path for a completely sorcerous solo, which may be the best of an exceptional bunch you’ll encounter across the span of Teufelsbücher.

The public relations material accompanying the album’s announcement explains that its German-language title, which literally means “The Books of the Devil”, refers to texts circulated in Europe in the late 1500s and early 1600s by theologists and inquisitors with the intent of denouncing sins they attributed to the powers of Hell and putting forth the means of combating the Devil’s arts. As the press material tells us: “Through hundreds of pages, prodigious, fantastic, wonderful, and scary stories were included, as well. However, along with revealing their own perversion finally instead of warning men, they ended up causing fascination and unleashing morbid fascination regarding superstition and witchcraft”.

Teufelsbücher will be released by Iron Bonehead Productions on October 18th. The fantastic cover art for the album was created by Rodrigo Pereira. AND… at last… we premiere a full stream of it below.

One Response to “AN NCS ALBUM PREMIERE (AND A REVIEW): UNAUSSPRECHLICHEN KULTEN — “TEUFELSBÜCHER””