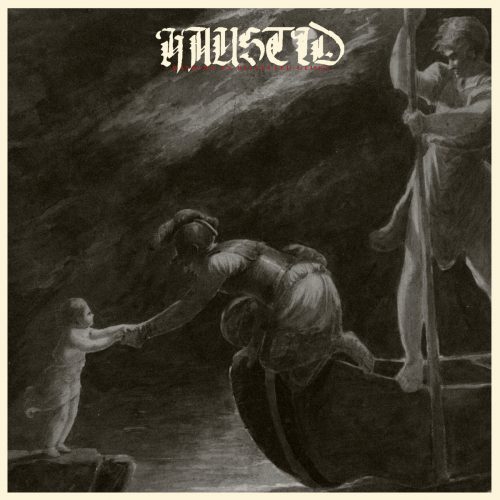 I learned about Haustið just before Thanksgiving last year, thanks to a recommendation from Rennie of starkweather, who vividly compared Haustið’s then-latest demo to “a cross of Emanation and Wolok on a suicide mission”. When I wrote about that demo, Howling, the Sol Above, Nothing Below, I described “a surreal quality to the music as it flows along its twisting course, with outbursts of dark, dissonant, thorny permutations interwoven with soulful, gliding, and sinuous instrumental passages, both moody and mystical, that sometimes partake of traditions other than extreme metal”.

The next Haustið recording, released this past spring and also discussed here, was a two-track EP named Long Lost Ruins Cried their Black Soot. It was also a marvelously multifaceted experience, with both a “physically” powerful impact and a bitter and chilly atmosphere, delivering one changing experience after another.

Now we find ourselves in the midst of autumn, and Haustið (which is itself Icelandic for autumn, though it is the solo project of a Brazilian man who uses the name Draug), has prepared a new EP named Basking In Reflected Glory, and it’s our good fortune to premiere its tremendous title track today.

Though a long song (at roughly 11 minutes), it’s the kind of music that makes a listener lose track of time. A genre hybrid that includes elements of black metal, post-metal, death metal, and doom, it’s emotionally powerful and completely immersive. Like all of Haustið‘s previous works, it’s also an interweaving of contrasts. At times it’s beguiling, like a moonlit reverie, but it’s also crushing in its heaviness and wrenching in its sorrow.

Anchored by mainly mid-paced, neck-bending drum rhythms and a big, gravelly bass, it doesn’t take long for the music to envelop the listener in its power, or to begin building dark moods. The high, searing, slightly dissonant guitar tones seem to transmit anguish, as does the raw, howling quality of the vocals, and the rippling lead that emerges is both feverish and desolate.

There are times when the music pounds, and drags dismal chords over double-bass thunder, creating sensations of calamity. While the bass is a vibrant presence, the shimmering leads become transmitters of oppressive pain. And there’s a ringing guitar harmony that’s a particularly spellbinding feature of the track, the two guitars coming through separate channels, almost like a call-and-response among spirits.

The vocals reach levels of splintering intensity, matched by the tension in a heavy, stomping riff and the beautifully doleful leads, but still propelled by drum beats that get the head moving. As the end approaches, the music reaches a crescendo with all the signal elements of the song — the piercing, rippling lead, the rapidly pulsating bass, the double-bass thunder, the searing sheen of the rhythm guitar — combining to engulf the listener in sounds that are both mesmerizing and freighted with grief.

There’s one more substantial track on this new EP, and the release further underscores that Haustið is a band whose every new work will be worth hearing without delay. Basking In Reflected Glory will come out via Bandcamp on October 18, 2019.

By the way, the cover art is a detail from “Lord William and the Ghost of his Nephew”, by an unknown 19th-century painter.

2 Responses to “AN NCS PREMIERE: HAUSTIÐ — “BASKING IN REFLECTED GLORY””