Regular visitors to our site will be familiar with the French label Antiq Records, a label we’ve come to prize around here for exceptional releases by Grylle, Véhémence, Wÿntër Àrvń, Dorminn, and Créatures (to name a few). And now Antiq will be adding to that list with the striking debut album of the pagan black metal band Tan Kozh.

The name of the album is Lignages Oubliés, and it’s set for release on November 15th. Inspired by ancient Indo-European myths, the first part of the album (we’re told) “contains visions of the past and future wars and destruction, within the background the awakening of ancient pagan gods and the eternal turn of the wheel of time; the second part of the album is made of prayers addressed directly to ancient gods”.

What we have for you today is a stream of the album’s opening track, “Troisième Fonction“, which launches the first part of the record. 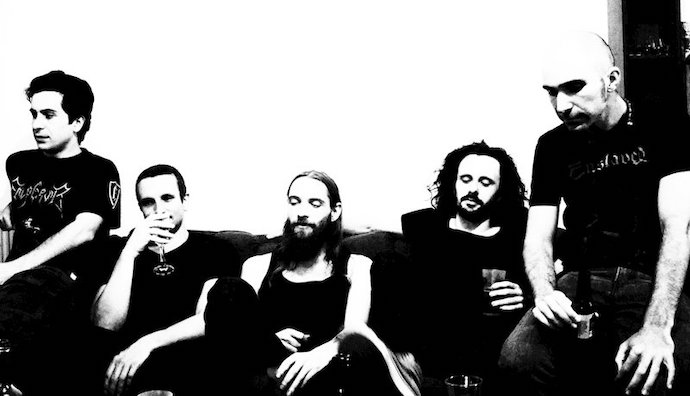 By way of background, Tan Kozh was created by Sven (Himinbjorg, Belenos, Möhrkvlth, Ar Bard) in 2015. After composing an album, Yamnah (Belenos) helped him with the lyrics, and they were then joined by Decay (ex-Way to End) on drums, Barved (ex-Les Chants De Nihil) on guitar, and Introspect (Introspect, ex-Les Chants De Nihil) on bass, all of whom participated in the recording of the record.

A light guitar instrumental, joined by tumbling drums and other ringing tones give the opening moments of “Troisième Fonction” a mystical sheen, but the song soon becomes much heavier and gloomier, thanks to the introduction of a big craggy riff and ear-scraping, coarse-edged howls. A return to the opening motif highlights the warmth of a fretless bass, but that crushing riff and those scorching vocals are never far away.

This is a song whose through-line of intensity arcs ever higher. After seething riffage creates a bridge, a cantering drum rhythm, augmented by double-bass rumble, and a tormented guitar lead pave the way forward, toward greater summits of despair. The melody seems to moan and cry out in supplication, rising in pain and yearning; the voice screams and bellows in cold, cruel tones as the music reaches a zenith of its intensity before falling away, leaving the pulse of the bass as the final memory.

“Troisième Fonction” is a dynamic and gripping experience, and an early sign that Antiq has found another gem.

Lignages Oubliés was mixed and mastered by Sven Vinat (Dream Box studio), and the cover art is by  Above Chaos (Inquisition, Bethlehem, Melechesh, Nordjevel, Tsjuder). It’s available for order now: