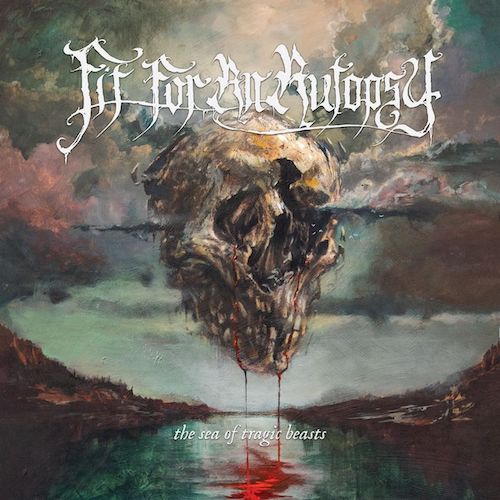 (We present Andy Synn‘s review of the new album by New Jersey’s Fit For An Autopsy, which will be released on October 25th by Nuclear Blast and features cover art by Adam Burke.)

We all know it, of course, but have you ever thought about what it’s really trying to say?

The point it’s trying to make, at least the way I see it, is that while some artists may borrow an influence here or there from various sources, the really great ones take these influences and make them their own.

And that’s precisely what prominent “Gojira-core” pioneers Fit for an Autopsy have done on their latest, greatest, album, taking the very best elements of the Duplantier brothers’ pre-mainstream work – the powerful riffs and primal vocals, the turbulent, tidal rhythms and melancholy melodies, the ear-catching, attention grabbing pick-scrapes – and stamping them with their own indelible mark. 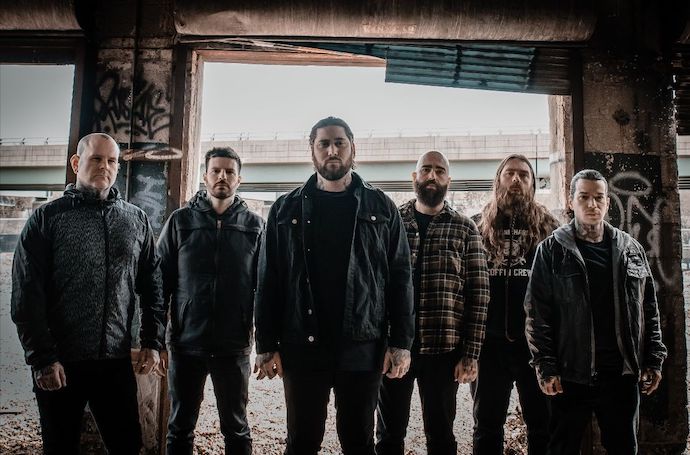 But while it’s impossible not to hear the major Gojira influence informing almost every aspect of this album, from the propulsive title-track which opens the record, to the moody melodic outro of “Napalm Dreams”, it would be a mistake to suggest that the band have somehow transformed into mere clones of the French foursome.

For one thing, elements of FfaA’s ‘core roots are still very much in evidence (though much reduced), with the pneumatic “Warfare” being the most obvious throwback in this regard, but the group have also developed a clear sense of their own identity, and a keen grasp of their own distinct dynamic, in the years since The Great Collapse, which helps ensure that every song (well, almost every song) shines even brighter than ever.

The aforementioned title-track, for example, is all gargantuan grooves and outsized energy, with enough massive hooks and subtle technical touches to ensure it instantly grabs your attention, while “No Man Is Without Fear” is an even heavier, even more aggressive slab of unyielding force that really earns (but doesn’t over-indulge) the “-core” part of that “Gojira-core” moniker.

With “Shepherd” the band introduce even more melody and subtle technicality into the mix, while also exploiting some brilliant structural shifts – from brooding belligerence to blast-driven ferocity to heaving, hypnotic groove – while the ominous “Mirrors” embraces the sort of dark and doomy, melodically-tinged menace that wouldn’t sound out of place on The Way of All Flesh, before twisting it into a new form with an added dose of thrashy, blasty extremity.

“Unloved” is a potentially more divisive piece, comprising just over two minutes of chugging, churning, slow-burning rhythmic riffery, followed by a final convulsive blast of pure, unadulterated heaviness, whose linear structure some may find a little off-putting (although I guarantee you it’s a real grower), whereas “Mourn”, by contrast, is an instantly infectious stomper whose mix of suitably mournful clean-sung melodies and gravel-throated growls, underpinned by some characteristically huge riffs (as well as the occasional moment of frantic energy), help make it one of the biggest highlights of the album’s second half.

As good as this album is though, it’s not quite perfect.

You see, while the vocal performance is, inarguably, one of the album’s biggest highlights, the use of clean (or pseudo-clean) singing, often layered on top of Joe Badolato’s always imposing growl, has increased dramatically since their last album, with at least seven out of these ten songs employing some sort of clean/harsh vocal interplay.

And while this was probably a pretty predictable development, there’s a thin line between “eloquent enhancement” and “obvious gimmick”, and the more they abuse this trick the more they risk being accused of the latter.

Thankfully however, there’s only one song here (the melodramatic, uber-generic “Your Pain Is Mine”) that really falls into this trap (sounding more like a heftier As I Lay Dying b-side than anything), and the band are smart enough to vary how, where, and why, they use this particular device so that it still maintains its effectiveness.

I’m going to end this write up the same way the band themselves do, with the colossal climactic pairing of “Birds of Prey” and “Napalm Dreams”.

The former is, in my opinion, the album’s best song, and the closest thing the band have to another “Black Mammoth” style stand-out (albeit one that’s significantly darker, and proggier), while the latter provides the record with an unexpectedly sombre and introspective ending which builds on, and flows from, the firm foundation established by the preceding thirty-five-ish minutes.

And while, on a personal level, it feels like “Birds of Prey” would have made an even stronger closer (that final riff is an absolute monster, as is the fitting final refrain of “we end where we began”), I can see the argument for either one serving as the album’s concluding statement, and suffice it to say that the decision to close the record with two of the most impressive and immersive songs the band have ever written was a smart one indeed.

It’s always a bold move for any band to steal so much, so blatantly, from one of the Metal scene’s most prominent acts. And it takes a lot of courage, and conviction (and maybe a bit of bull-headed determination) to not just take from your influences, but to try to make them into something you can truly call your own.

But, somehow, Fit for an Autopsy have succeeded in this herculean task, where so many others have failed.

There’s another cliché that springs to mind right now: “when you come for the king, you’d better not miss”.

Well, FfaA took their shot, and they nailed it.

FIT FOR AN AUTOPSY:
https://www.facebook.com/FitForAnAutopsyOfficial/

One Response to “FIT FOR AN AUTOPSY: “THE SEA OF TRAGIC BEASTS””