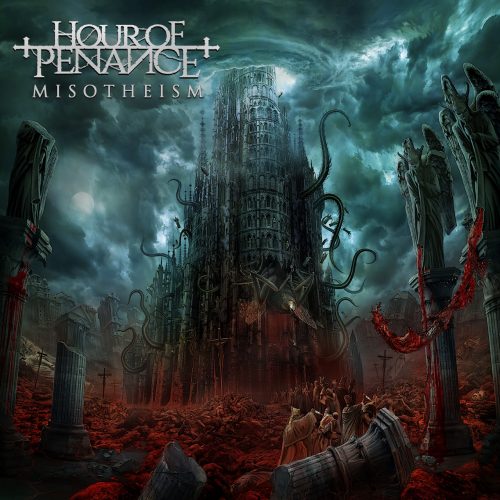 (Here’s Andy Synn‘s review of the new album by the Italian death metal band Hour of Penance, which is set for release on October 25th by Agonia Records.)

Being in a band is hard. I can tell you that right now. Simply being good at what you do isn’t enough to guarantee you’re going to be successful (whatever that means).

Truth be told there’s a lot more involved than just being able to string together a series of sick riffs, including (although many don’t like to admit it) a fair bit of luck and good fortune.

But being able to build an actual career out of your music is even harder still. It takes all those aspects alluded to above – skill, luck, ambition – and more.

Perhaps most importantly it takes perseverance, and an ability to weather all the ups and downs, the false-starts and set-backs, that come with the territory. And, even then, lots of bands still don’t make it (through no fault of their own).

All this is a long-winded way of saying that it’s very rare indeed for bands to make it as far as Hour of Penance have here, with the imminent release of their eighth album, Misotheism.

There’s an argument to be made that Hour of Penance effectively perfected their sound around the time of Paradogma/Sedition, and that everything since then has simply been either a refinement (at best) or a repetition (at worst) of what they’ve done before.

And while I have some sympathy with this perspective, as pretty much the entirety of the band’s back catalogue does feature the same “everything turned up to eleven” aesthetic, I’d counter that to suggest that the Italian quartet have simply been remaking the same record over and over again sells them a little short.

After all, the old adage of “if it ain’t broke, don’t fix it” still holds true to this day, and in an era where many bands still struggle to truly “find themselves”, the fact that  HoP have been consistently making an artform out of brutality for a whopping two decades now is nothing to dismiss so lightly.

The caveat to that, of course, is that if you didn’t like Hour of Penance before now, then Misotheism is unlikely to change that, although long-term fans (such as myself) will no doubt be pleased by the subtle improvements and refinements that have been made, resulting in an album that’s both less bloated than Regicide and more satisfying than Cast the First Stone.

The first half (or thereabouts) of the record is (scene-setting intro “Mass Crucifixion of Kings” aside) a prototypical example of the band’s balls-to-the-wall bombast in action, delivering a near ceaseless barrage of rolling kicks, strafing blasts, bestial growls and breakneck riffs.

It’s punishing stuff, make no mistake about it, but, for all its unadulterated power and instantaneous impact, it’s also topped off with just the right amount of menacing melody and grim-faced groove to engage both your higher brain functions and your more primal instincts at the same time.

The album’s second half is a slightly different (and, I would argue, slightly superior) matter, however.

On the one hand it’s still locked and loaded with enough explosive blastbeats and armour-piercing riffs to take down a full-grown bear (or six), but there’s also a much greater emphasis on mood and atmosphere, as well as aggression, that helps make the track more than just the sum of its already impressive parts (and which reminds me, in places, of the similarly savage-yet-sinister approach of fellow disciples of extremity Sulphur Aeon).

“Sovereign Nation” too employs a touch more atmosphere to accentuate the darkness and dread, with the band wisely allowing the two guitars to separate a little bit in order to provide slightly different melodic and/or technical textures, rather than forcing them to proceed in constant lock-step with one another.

And while “Dura Lex Sed Lex” initially seems like it’s swung all the way back to the “more is more” approach of the album’s first few tracks, the latter stages of the song demonstrate quite clearly how simple it can be to balance both extremity and dynamic if you really want to.

The album concludes with the domineering duology of “Iudex” and “Occult Den of Snakes”, both of which, in their own way, provide an impressive argument for why it’s important to take your foot off the gas now and then.

Don’t get me wrong, neither track is lacking in intensity by any means (parts of “Iudex” will still rip your face off if you’re not careful), but the former’s blend of scything shred and rhythmic riffery, coupled to the latter’s ominous, oppressively heavy stomp, is not only a stunning send off to the album, but also a welcome reminder that Hour of Penance are more than capable of shaking things up when they want to.

Misotheism is released this Friday, and hopefully I’ve done a pretty good job here of preparing you for what to expect when you hear it.

Suffice it to say that this album, from its face-melting beginnings to its more atmospherically charged second half, is a testament to the band’s longevity and a prime example of why, when so many others have fallen by the wayside, Hour of Penance continue to stand tall.

One Response to “HOUR OF PENANCE: “MISOTHEISM””